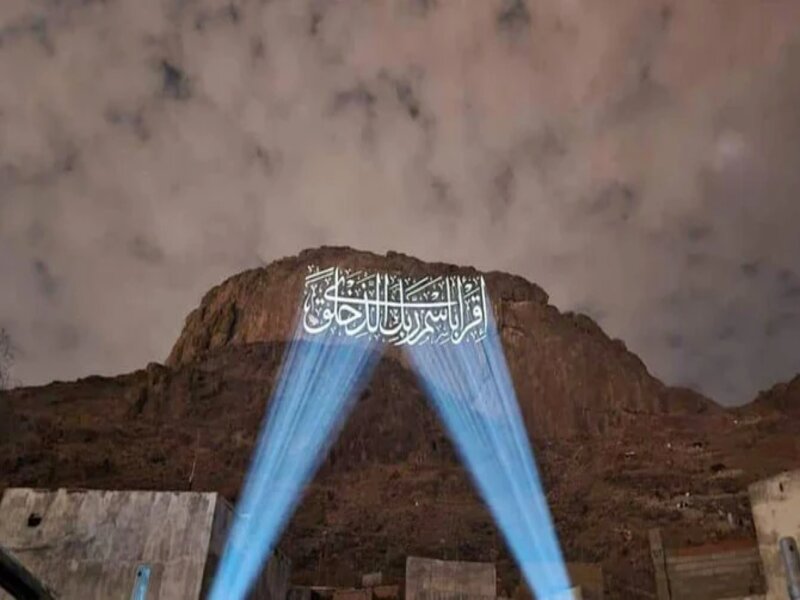 Residents of Makkah have been treated to a laser light display that filled the sky with the first Qur’anic verse revealed to the Prophet Muhammad.

The verse was beamed over the district of Jabal Al-Noor, 4 km northeast of the Grand Mosque in Makkah and home to the Cave of Hira, where the prophet received the first revelation by the Angel Gabriel.

Dr. Fawaz Al-Dahas, director of the Makkah History Center, said: “Jabal Al-Noor has a historical value for Muslims in general, and is one of the most important historical and archaeological sites in Makkah.

“Throughout history, it was called Mount Hira, but it has been named Jabal Al-Noor (Mount of Light) in reference to the light that radiated throughout the earth after the first verse of the Holy Qur’an, ‘Read in the name of thy Lord who created,’ was revealed.”

He added that the prophet remained secluded for days at Jabal Al-Noor, reflecting on God’s greatness and rejecting polytheism.

Al-Dahas said: “What distinguishes Makkah from the rest of the world’s cities is that it is an open museum. All its mountains, valleys, rocks and cemeteries represent a unique history, telling immortal stories of the prophet and his honorable companions.”

Abdullah Al-Azhari, a resident of Jabal Al-Noor, said: “The first revealed verse of the Holy Qur’an with laser lights on Jabal Al-Noor gave a spiritual dimension to the place, adding prestige and veneration.”

Saudi Arabia’s Vision 2030 aims to enrich the religious and cultural experience of visitors, especially at sites that hold historical importance for Muslims.

The laser display was organized by Samaya Investment Co., which is also building two cultural projects in Makkah: A Museum of Revelation in Jabal Al-Noor and a Museum of Migration.

The cultural centers aim to acquaint visitors with the history and legacy of the prophet’s mission, through presentations from the pre-Islamic era to the present.

Under the direct supervision of the Royal Commission for Makkah City and Holy Sites and other agencies, work has also begun to establish the Hira Cultural District on an area of more than 67,000 sq. meters.

It will comprise many cultural and tourist spots such as the Revelation Gallery and the Holy Qur’an Museum.

Mohammed Al-Hussaini, a local resident, said: “The great cultural projects would put an end to the randomness that we used to live in. The place will become more organized and have a civilized look.

“We are eagerly waiting for the completion of the entire project, which will reflect spiritually, socially and culturally on the place.”