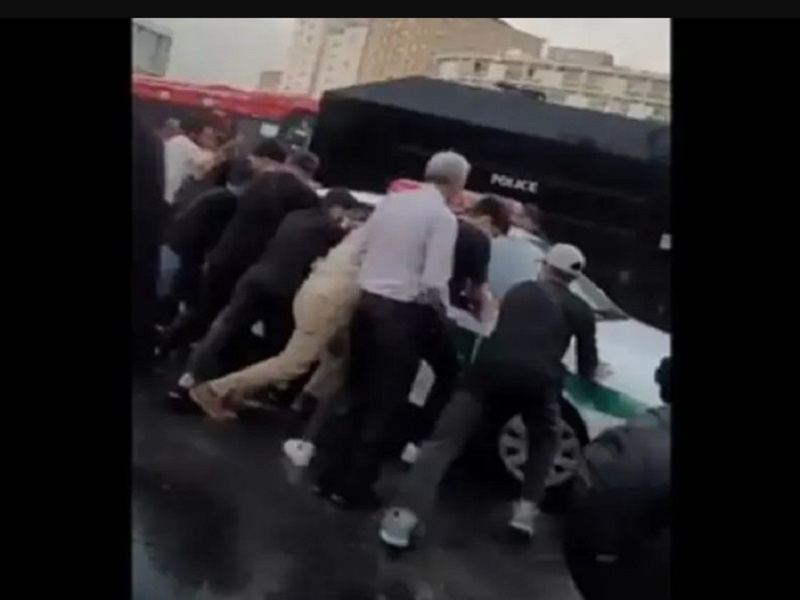 Iranian protesters attempted to flip over a police vehicle in the capital Tehran on Monday, footage shared on social media showed, as demonstrations triggered by the death of a young woman in police custody spread to other parts of the country.

A video shared by @1500tasvir, an Iranian Twitter account that reports on protests in Iran, showed demonstrators in Tehran attempting to flip over a police vehicle with smashed windows.

Another video from Tehran showed protesters clashing with a water cannon as it attempted to disperse demonstrators.

Other videos shared on Twitter showed protests spreading to other parts of Iran, including the northern city of Rasht and the northeastern city of Mashhad.

Al Arabiya English could not independently verify the videos’ authenticity.

The protests began after Mahsa Amini, a 22-year-old Kurdish Iranian woman, was pronounced dead on Friday. Amini fell into a coma shortly after she was detained by the morality police over her hijab in Tehran on September 13.

Tehran’s police said Amini “suddenly had a heart problem” while in detention, and state-run outlets ran stories claiming she suffered from multiple health conditions prior to her arrest.

But Amini’s parents have said that their daughter did not have any health problems prior to being detained. Activists say she was beaten while in detention, causing serious injuries that led to her death.

Hijab, which was made mandatory for women in Iran shortly after the country’s 1979 revolution, is considered a red line for Iran’s theocratic rulers. Women who break the strict dress code risk being harassed and arrested by Iran’s morality police.

Based on the dress code, women are required to fully cover their hair in public and wear long, loose-fitting clothes.