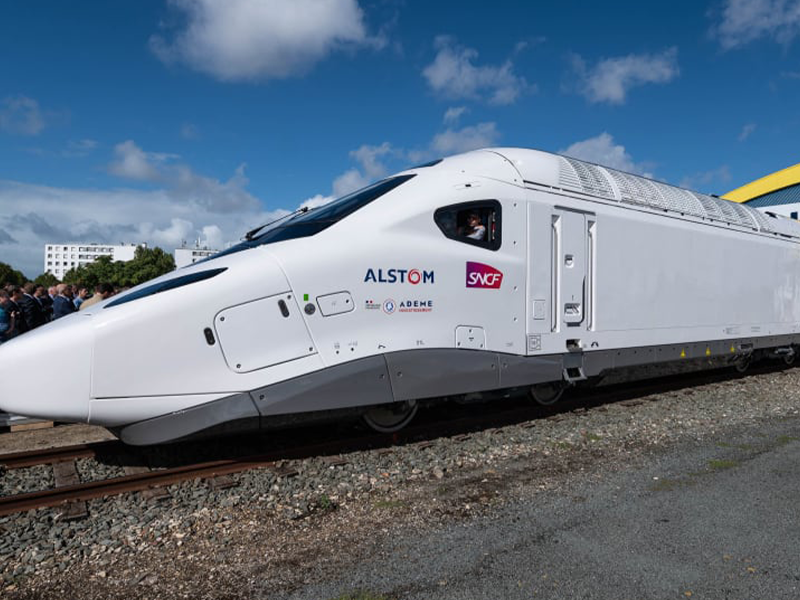 French railway company SNCF and train manufacturer Alstom have unveiled the first completed TGV M, a next-generation high-speed double-decker train that features a longer, more aerodynamic nose — perfect for hurtling across the French countryside.Alstom dubbed the new train “the TGV of the future.” TGV stands for Train à Grand Vitesse, meaning high-speed train.This swanky new design will premiere on the Paris rail network in 2024 and across the country over the following 10 years.

TGV is one of the world’s most famous high-speed train brands and has been a staple of European rail travel since the early 1980s.Back in 2018, SNCF, the state-owned French railway company which controls TGV, ordered 100 TGV M trains (also known as Avelia Horizon trains) at a cost of 2.7 billion euros (around $2.7 billion). An additional 15 trains were ordered in August 2022.The majority of the trains will operate within France, but Alstom has said 15 will ride the rails internationally. TGV M will operate at the same maximum speed as the previous generation of TGV trains — 350 kilometers per hour (nearly 220 mph).”In 2022, we don’t want to go faster,” said Alstom spokesperson Philippe Molitor told CNN Travel, explaining that the goal instead is high speed trains that accommodate more people while consuming less energy.

TGV M trains don’t just have 40.5-centimeter (15.9-inch) longer noses than their predecessors, they’re bigger all round. Roomier carriage interiors can accommodate up to 740 seats, compared to the current maximum of 634.TGV Ms also got what manufacturer Alstom calls “unprecedented modularity,” meaning the train’s interior configuration can be easily adjusted. A carriage can be converted from second class to first class and back again, or adapted to allow space for oversized luggage or bikes. There will also be dedicated on-board passenger social areas to offer variation and flexibility on longer journeys.According to Alstom, the design improves TGV’s current energy efficiency and carbon footprint, with 97% of the train’s components now recyclable.It also boasts better accessibility — there will be a lifting platform to allow wheelchair users to independently board the train, and an on-board sound system to aid visually impaired travelers.Larger windows will make the most of views while the TGV’s lighting will adapt depending on natural light outside.In a statement, Alstom describes a “train set whose sensors continuously transmit thousands of pieces of data enabling the train to be examined in real time from every angle to optimize maintenance and availability.”

TGV M’s futuristic elements will necessitate some infrastructure changes on France’s rail network — for example, some station stop signs will need to be moved so that they’re not obscured by the new train’s longer nose.Train drivers were actively involved in the design process, specifically the interior of the driver’s cab, says Alstom.”Using virtual reality goggles, a hundred drivers were given a virtual tour of the cab, with a choice of three space designs,” the company says.With the first completed train unveiled, the next step is what Alstom describes as “a long period of testing” — the first test phase will start in the Czech Republic at the end of 2022.