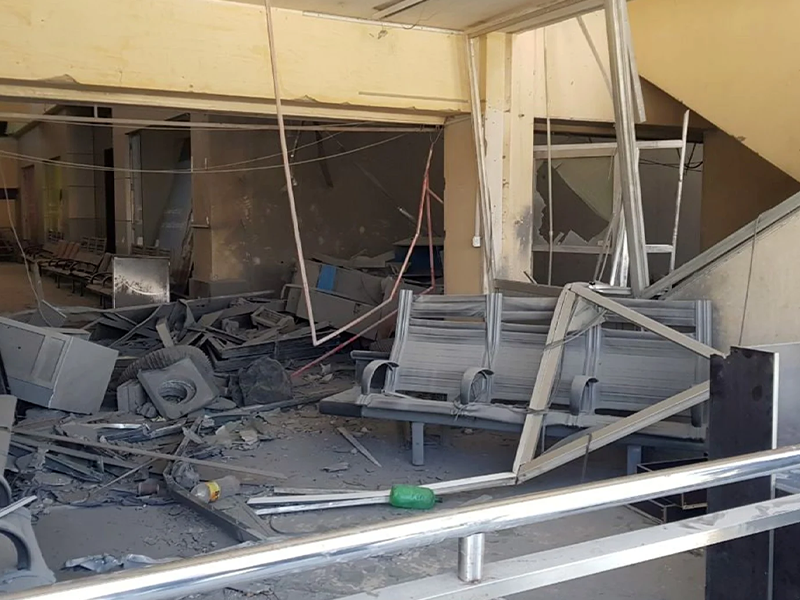 The freshly tarmacked runway at Damascus International Airport had barely dried out from lengthy repairs after an Israeli missile attack in June before maintenance workers were mustered for a new mission in Aleppo, where another runway had been damaged.

For the third time in three months, a Syrian airport had been targeted and disabled by Israeli night raids, in an apparent escalation unlike any seen before.

Israel has conducted hundreds of air strikes in Syria since 2011, targeting government troops, Iran-backed fighters and Hezbollah. However, targeting airports and paralysing aviation has been a noticeably more recent element in their policy.

And now, there are often just days between repetitive strikes on the same targets.

Staff at Aleppo International Airport were still recovering from repairing the airport after an 31 August raid before another hit on 6 September and forced the facility out of use for the second time in a week.

With Aleppo airport repeatedly forced out of service in recent weeks, there are increasing fears the facility could be bombed out of use for a significant time, further limiting Syria’s much-pressured aviation industry.

A member of ground staff at the airport, speaking on condition of anonymity, told Middle East Eye that more attacks are expected.

“This is the second time in one week they bomb the runway and the airport, taking out vital equipment. It’s clear now that this will continue for a certain time because it wasn’t normal for them to attack airports this often,” he said.

“It seems this period we will witness changes. This is a civilian airport with passengers and civilian planes. What will happen when they attack a plane and kill hundreds of civilians? Who cares at this moment in the world? The Israelis are not stopping and it is getting more dangerous, they are not concerned with civilians.”

The raids on 31 August targeted both Aleppo and Damascus airports simultaneously. In Damascus, losses included a crucial navigation aid station and a distance-measuring device, as well as other equipment and facilities.

The UK-based Syrian Observatory for Human Rights group, which relies on a network of sources on the ground, said that Israel targeted a warehouse at the airport belonging to Iran-backed fighters. Either way, technology used for general aviation was struck, apparently directly, to prevent the use of the airport.

On Wednesday, the UN’s Syria commission said Israeli strikes on Damascus airport in June made it impossible to fly in humanitarian aid deliveries for two weeks.

In Aleppo, repairs were somewhat easier. Bassem Mansour, director general of civil aviation in Syria, revealed that work to resume navigation services was finished quickly following the 31 August attack, “with the follow-up of the rest of the repair operations later”.

However, this was not before Syria’s transport ministry diverted all flights temporarily to the capital, with free bus trips for stranded civilians.

Syria’s ageing air defences did respond to the Israeli raids, but as usual to no avail. With Russia, the Syrian government’s close ally with a direct line to the Israeli leadership, bogged down in Ukraine, Syria’s defence capacities are set to worsen amid reports that the only working S300 air defence system thought to be under Syrian control has now been redeployed to the Black Sea as Moscow looks to prioritise elsewhere.

Kamal Alam, a non-resident senior fellow at the Atlantic Council, believes Israel is increasing its volume of strikes in response to a regional shake-up.

“Israel has been attacking Iran in Syria relentlessly without realising it’s not going to deter Iran. Tensions between Russia and Israel are also running high as a result of this, along with differences in Ukraine,” he said, adding that Israel risks its jets being shot down like in 2018.

“There will be a breaking point soon enough, especially as civilians get hurt and the attacks continue on airports in Damascus and Aleppo. Israel is frustrated with the potential Iran nuclear deal and the UAE and Saudi Arabia are also trying rapprochement with Tehran. That will make Israel more desperate – but at what cost?”

Though the Syrian authorities are long used to Israeli raids, this targeting of key infrastructure has drawn particularly sharp condemnation, with the foreign ministry accusing Israel of war crimes.

The statement acknowledged the heightened intensity of Israeli attacks: “Syria reminds the United Nations that [Israel] today has no qualms about expanding its repeated attacks on different areas of Syrian territory and deliberately endangering Syrian airports and civil aircraft in Syrian airspace.”

Mzahem al-Saloum, an expert on security affairs in Syria, believes there has been an important shift in strategy that has led to these actions by Israel.

“There has been a strategic change in the way Israel is targeting Iranian-linked installations, in a way that is attacking central infrastructure in Syria. This is partially linked to the Iranian nuclear deal and also a sign of rising Israeli frustration,” Saloum told MEE.

“In terms of the airports, the Israeli attacks are powerful and constant. Airports are a fundamental infrastructure in the country, all Syrian anti-aircraft defences that are engaging in countering these strikes are being attacked after activation.”

Saloum foresees that these attacks are just the beginning of a new phase of escalation.

“The airports are likely to remain targets for the foreseeable future judging by the previous increase in attacks that we are witnessing in the latest strikes in Aleppo. They targeted planes directly, which is something the Israelis had not previously done,” he said.

Despite Syria’s aviation sector being in crisis, a significant positive shift for the Syrian authorities was seen in July when European sanctions were lifted from government-linked airline Cham Wings, which has been accused of helping smuggle refugees to Europe.

The airline has also been sanctioned by the US over allegations it has transported military materiel and personnel.

Osama Sate’a, director of business development and public relations at Cham Wings, clarified that this decision does not mean that it can now operate flights to Europe. “The removal of sanctions will allow the company to request permission to operate at airports only.” He confirmed that Cham Wings had appealed the sanctions.

“The removal of the sanctions imposed on 18 December last year came as a result of our objection to this decision taken by the European Union countries against the company, which is certainly an unfair decision.”

Dan Stoenescu, head of the EU delegation to Damascus, told Middle East Eye that there are instances in which sanctions can be reviewed: