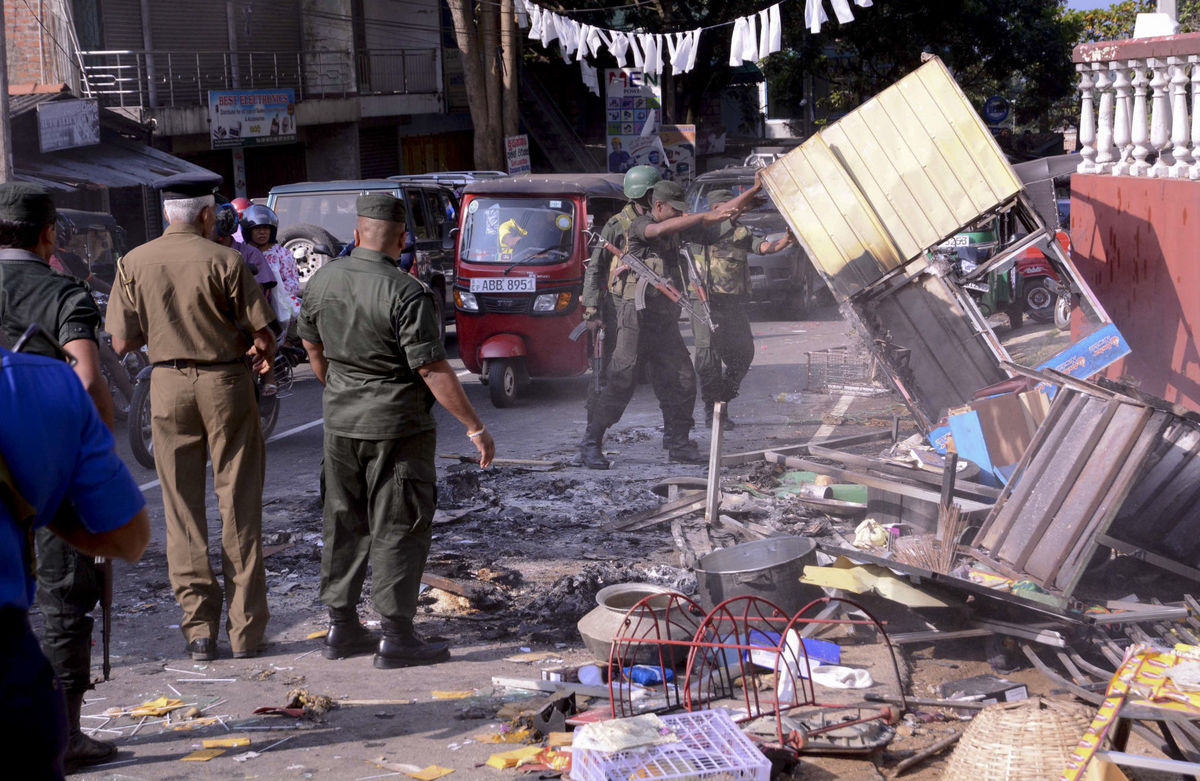 The Sinhalese Buddhist mob came by the hundreds, screaming at the top of their lungs and carrying sticks, stones and petrol bombs, as they descended on the hill town of Ambatenna in central Sri Lanka on Wednesday.

Some two dozen policemen and soldiers watched helplessly, according to residents, as the mob vandalised and set fire to Muslim homes and businesses in the town’s Welekada area.

“We were so scared,” Fathima Zameer told Al Jazeera, clutching her three-week-old infant as she recounted the violence that swept through her neighbourhood that morning.

“We have nowhere to go. They broke all the windows in my house. Our whole house is burnt.”

The mob, which witnesses said was between 200 and 500-strong, overran Welekada defying a curfew and a state of emergency imposed by President Maithiripala Sirisena a day earlier to quell anti-Muslim riots that began in the highland district of Kandy over the weekend.

In Welekada, rioters vandalised at least 15 houses belonging to Sri Lanka’s Muslim minority and a mosque, residents told Al Jazeera. Four of the buildings and several vehicles were also torched.

The attacks have raised fears of a return to conflict and instability in Sri Lanka, less than a decade after the South Asian island nation ended a bloody civil war with Tamil separatists.

The latest bout of communal violence began on Sunday when a man from the mainly Buddhist Sinhalese majority died after being beaten by a group of Muslim men over a traffic accident in the town of Teledeniya in Kandy, an area famous for its tea plantations and Buddhist religious sites.

The next day, hundreds of Sinhala Buddhists, mostly outsiders, according to officials and residents, poured into Kandy and attacked and torched dozens of Muslim businesses, houses and mosques. The body of a 23-year-old Muslim man was found in a burned building, and the government, fearing more violence, imposed a state of emergency on Tuesday. It also deployed the army and extended a police curfew in the region.

The violence, however, continued. Overnight on Wednesday “several incidents” were reported in four towns, said Ruwan Gunasekara, a police spokesman.

Three police officers were injured during clashes in Menikhinna, he said. Later in the day, Ambatenna was attacked and a Sinhalese man was killed there after a hand grenade he was carrying exploded.

Gunasekara said security forces have arrested about 35 people since the riots began.

The government has also suspended internet services in the area and blocked access to Facebook and other social messaging applications including Whatsapp and Viber in an attempt to halt incendiary rumours.

‘We don’t feel safe’
Shukry Cassim, whose four-bedroom house was vandalised in Welekada, said he was “petrified”.

“We don’t feel safe. All our children are traumatised. We don’t know where to go, or who to trust,” the 27-year-old accountant told Al Jazeera, standing in front of the burned hulk of his car in his garage.

Cassim, however, said the violence was instigated by “a few people”.

Relations between Muslims and Buddhists in the Kandy district have been historically harmonious, he said, adding: “We share food during religious festivals; we play together and buy goods from each other’s shops.”

Analysts say tensions flared up between the two communities because of the rise of Buddhist nationalist groups following the end of the country’s three-decade war. These groups include the monk-led Bodu Bala Sena, which has links to Buddhist hardline groups in Myanmar.

They are widely perceived to have the support of former President Mahinda Rajapakse and accuse the Muslims, who make up 10 percent of Sri Lanka’s 21 million population, of forcing people to convert to Islam and of destroying sacred Buddhist sites. Prior to the Kandy riots, at least three other major incidents of anti-Muslim violence have been reported in the past year.

“Sri Lanka is on the brink,” said Alan Keenan, a researcher at the International Crisis Group.

“These attacks are organised, well-planned,” he said. “And there is good reason to believe they are partly designed to provoke a Muslim response, which would then justify more violence against Muslims.”

The Muslim community has “been admirably restrained” so far, he said. But if the minority retaliates by attacking the Sinhalese community, “other Sinhalese will then feel threatened and participate in a way they haven’t yet”.

Police Inaction
Keenan also said he was concerned by the inability of the army and the police to control the riots.

“The reason for this is unclear – whether they [the security forces] have been badly deployed, or deployed in inadequate numbers. What worries me is the hypothesis that some significant degree of the police and military are sympathetic to the rioters, which would not be surprising,” he said, referring to reports of state collusion in the clashes that broke out between Muslims and Buddhists in 2014 which left four dead and many injured.

A third factor may be that security forces are “cautious” to act, Keenan said, because of Sirisena’s coalition government’s humiliating defeat to Rajapakse’s party in local council elections in February.

Sirisena ousted Rajapakse, who is accused of authoritarianism, corruption and human rights abuses, in 2015 after campaigning on a platform of national reconciliation and constitutional reform. However, the coalition that brought the president to power was in tatters ahead of the February vote.

“They [the police] may not be sure if they should go after the rioters. Because they are known to have the sympathy, if not the active support of Rajapakse and his people.

“If Rajapakse and his people are going to be running the government soon, which is possible, a police officer wouldn’t want to be known as the courageous guy who did his duty and stopped the violence.”

Government in jeopardy
If the clashes continued, said Paikiasothy Saravanamuttu, executive director at the Centre for Policy Alternatives, a Colombo-based think-tank, the future of Sirisena’s government could be in jeopardy.

“Some say [the riots are instigated] to show that this government is incompetent and incapable,” he said. “Others say this is to create instability, which will expedite yet another regime change.”

Urging Sirisena and Prime Minister Ranil Wickeremasinghe to “act fast, quickly and decisively,” Saravanamuttu said security forces must arrest perpetrators of the violence and “it should be communicated to the country at large that we are a multi-ethnic, multi-religious country and we intend to stay so”.

The conflict could also affect Sri Lanka’s economic recovery after decades of war, he warned.

“If we continue with emergencies and blocking social media, tourists are not going to come and investors are going to start thinking twice,” he said.

Back in Welekade, Zameer said she was “hurt” and “heartbroken” by the violence.

“We want safety and security. We don’t want anyone to face this,” she said.

Cassim echoed her sentiments: “I have tasted the bitterness of war. And I want peace.”