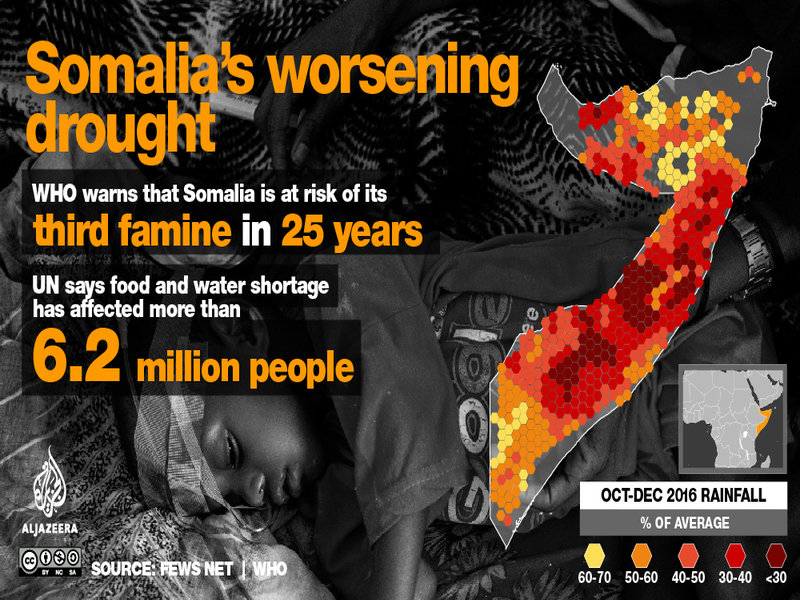 UN chief raises alarm during visit to drought-hit Somalia where half the population is battling hunger and disease.

The UN chief has urged international support to alleviate Somalia’s worsening hunger crisis during an emergency visit to the country.

Antonio Guterres issued the appeal on Tuesday after witnessing the suffering of malnourished Somalis and cholera victims during his first field trip since becoming the UN chief.

He said the hunger crisis requires a massive response as six million people, or almost half of the population of the Horn of Africa country, need assistance.

“Every single person we have seen is a personal story of tremendous suffering. There is no way to describe it,” Guterres said after seeing skeletal men, women and children in a cholera ward in Baidoa, 243km northwest of the capital, Mogadishu.

Somalia’s prolonged drought has caused widespread hunger, and the shortage of clean water has resulted in cholera.
“People are dying. The world must act now to stop this,” he said on Twitter on his arrival in Somalia.

“We need to make as much noise as possible. Conflict, drought, climate change, disease, cholera. The combination is a nightmare.”

In Baidoa’s cholera wards, adults and children had sunken eyes and protruding ribs. Because of the cholera-induced diarrhea, medical workers sprayed the wards with chlorine to disinfect the areas.

Guterres also visited a camp with hundreds of families displaced by the drought and Somalia’s battle against al-Shabab, the armed anti-government group.

Al Jazeera’s Rosalind Jordan, reporting from a camp for internally displaced persons (IDPs) near Baidoa, said: “Over the past few weeks, more than 200 families have come here from other parts of Somalia because they ran out of food back home.

“They are living outside in makeshift tents, the temperature is already above 30C. This is not the way any family wants to raise their children.”

Guterres said he was moved by the misery.

“It makes me feel extremely unhappy with the fact that in today’s world, with the … the richness that exists, that these things are still possible. It is unbelievable,” he said.

He wore personal protection armour and was surrounded by African Union peacekeepers and bodyguards to protect against possible suicide bombings and attacks.

Somalia is part of a $4bn aid appeal launched last month for four nations suffering from conflict and hunger.

The others are Nigeria, Yemen and South Sudan, where famine already has been declared in two counties.

Somalia over the weekend announced its first death toll since declaring a national disaster last week, saying 110 people had died in a 48-hour period in a single region.

Meeting the UN chief, Somalia’s President Mohamed Abdullahi Mohamed, also known as Farmajo, said: “My first priority is to address this drought crisis, and my main priority is to make an appeal to the international community to help us.”

Somalia is one of the six Muslim-majority countries affected by the revised travel banordered by US President Donald Trump.

Mohamed, himself a dual Somali-US citizen, took Guterres’ visit as an opportunity to speak out against the new immigration order.

“Definitely we will prefer to see that this travel ban should be lifted and, of course, we have to communicate with the US government because as everyone knows we have a large Somali community in the United States who I’m sure have contributed to the US economy,” Mohamed said in response to press questions.

“We have to address the root cause, which is the security situation here and how to defeat al-Shabab here.”