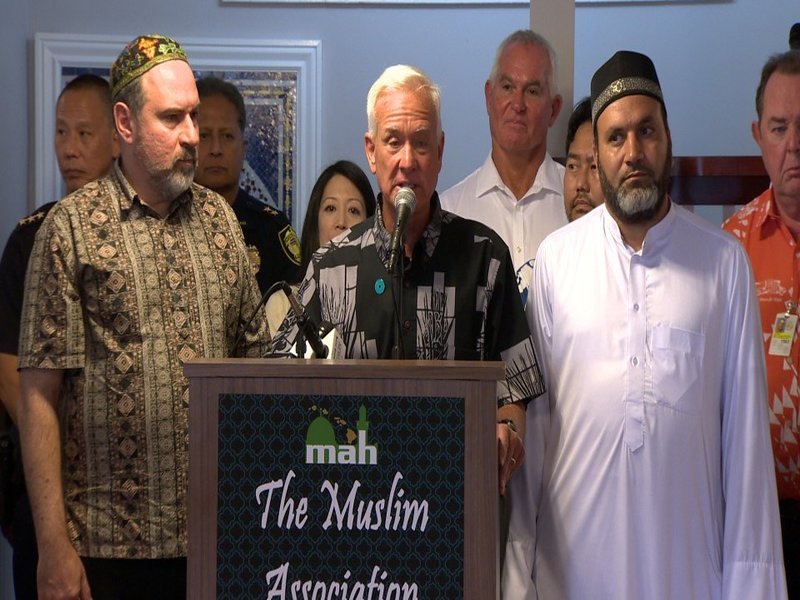 Honolulu -As Hawaii Muslims offered mid-day prayers Tuesday, the president of their association talked about recent anonymous hate messages directed at the Oahu mosque and its members via social media posts, emails and voicemail messages.

“Killing Muslims is God’s will! You beasts will pay!” a man screamed in one voicemail message.

Hakim Ouansafi, president of the Muslim Association of Hawaii, even one incident “is too many.”

But Ouansafi believes the mandate is provoking hateful messages aimed at Muslims.

He quoted one written message the Hawaii Association received. “Now we have a president who knows that you guys are evil,” the message said, “and we’re going to exterminate you.”

There have also been threatening emails sent to the Muslim Association of Hawaii and hateful posts left on its social media page.

The hateful messages aren’t just flowing in via voicemails.

Zakaria Khairane said a man threatened his 13-year-old daughter, who wears a hijab, on a city bus.

“When they got off the bus, the gentleman followed them with obscene gestures and verbal abusive language, which my daughter wouldn’t even dare to share with me,” Khairane said.

Another voicemail message to the mosque said, “Killing Muslims is God’s will! God’s will!”

Women at the mosque are concerned and worried because the head scarves they wear make them easily identifiable.

“I am a walking target because I advertise that I am Muslim. You don’t get confused that I am anything other than that,” Michele Ouansafi said.

Honolulu Mayor Kirk Caldwell visited the mosque Tuesday to deliver a strong warning to those making the threats, and to reassure mosque members.

“I want it to be made clear. Those who do those things will be prosecuted to the full extent of the law,” he said.
Ouansafi turned over the voicemails, emails and Facebook postings to police.