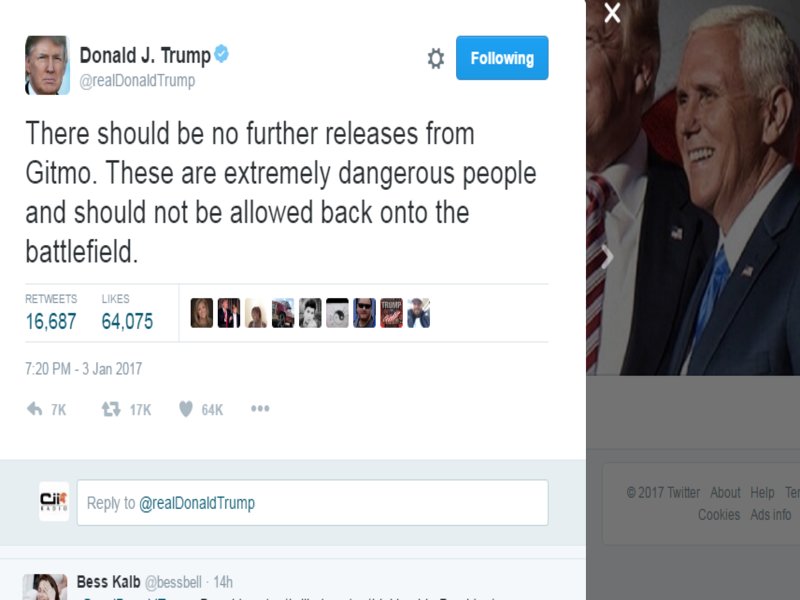 The White House ignores President-elect Donald Trump’s demand for a freeze on transfers from the Guantanamo Bay prison.

The US government has pledged to move ahead with the transfer of inmates out of the military prison at Guantanamo Bay, rejecting President-elect Donald Trump’s demand for a freeze.

“I would expect, at this point, additional transfers,” he said.

Earnest’s comments came just hours after Trump tweeted that “there should be no further releases from Gitmo”
There are 59 prisoners remaining at the controversial detention centre, only a handful of whom have started moving through the military tribunals, including the alleged plotters of the 9/11 attacks.

Many of the others are in legal limbo: Not charged but deemed too dangerous to release.

Trump has vowed to “load [Guantanamo] up with some bad dudes” once he is in the White House.

The White House pointedly responded when asked if Trump’s position would impact Obama’s thinking. “No, it will not,” Earnest said.

“He will have an opportunity to implement the policy that he believes is most effective when he takes office on January 20,” he added.

Conflicts with Obama
Trump’s declaration is the latest in a series of public disputes between Obama and the outspoken Republican president-elect, who has jettisoned the notion that there is “one president at a time”.

Obama came to office vowing to shutter the facility, saying detention without trial did not reflect American values.
But he has run up against political and legal hurdles, Pentagon foot-dragging and stubborn Republican opposition in Congress.

With Guantanamo’s closure blocked, Obama’s White House has focused on whittling down the number of inmates.
Around 20 of the remaining prisoners have been cleared for transfer. But finding countries to take them has often proven time-consuming.