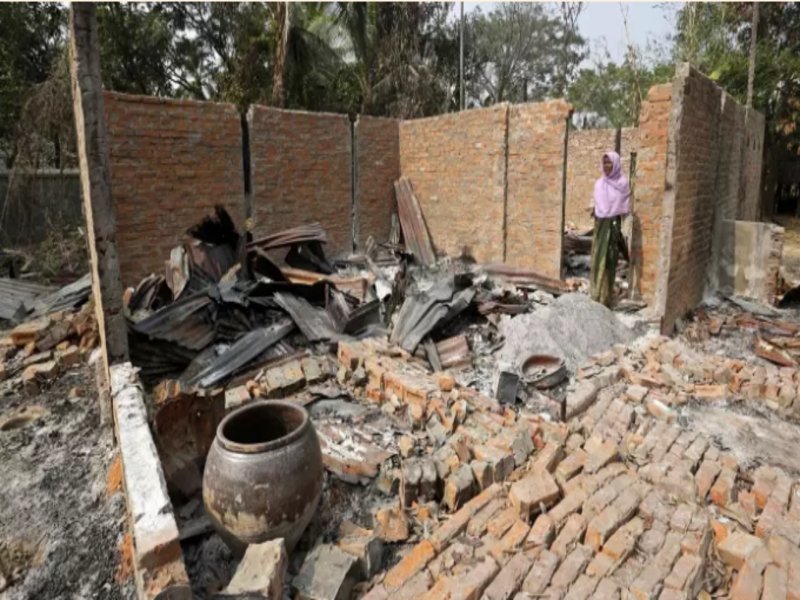 Mosuna Begum buries her head in a yellow scarf to hide her tears and recounts what happened to her a few weeks ago outside her village home in the west of Myanmar.

“A large number of military entered the village,” she recalls from her new home at the Leda refugee camp in the Cox’s Bazar district of Bangladesh, just 3km from the Myanmar border.

“They started shooting and burning houses. In the dead of night the military entered my room,” she says. “They divided the males and the females, and the women were taken into the forest. I was raped by two soldiers and my husband was slaughtered.”

Mrs Begum’s story cannot be independently verified but it chimes with those of thousands of recent Muslim refugees from predominantly Buddhist Myanmar. Rights groups say members of the security forces are persecuting Rohingya Muslim civilians.

The events have pitted the civilian-led government of Aung San Suu Kyi against international critics who say it should be doing more to protect the Rohingya and hold the army to account. Almost a dozen Nobel Peace Prize winners signed an open letter to the UN Security Council last week criticising their fellow laureate. They branded the action against the Rohingya a “human tragedy amounting to ethnic cleansing”, drawing parallels with Rwanda and Bosnia.

Aung San Suu Kyi has appealed for time. Some government officials and state media have dismissed the allegations as fabrications and condemned the activists and journalists who have reported them.

The crisis is the worst for years in the western Myanmar state of Rakhine and for its Rohingya minority, against whom discrimination became entrenched during previous military-dominated governments. Many have been refused citizenship, made subject to restrictions on movements and jobs, consigned to squalid camps and large numbers have fled the country.

The latest Rakhine problems began in October when nine Myanmar police officers were reportedly killed in attacks close to the Bangladeshi border. Soon afterwards, the army began conducting sweeps to root out the people they believed were responsible and their guns and ammunition.

According to the testimonies of several witnesses in refugee camps in Bangladesh, these sweeps have been indiscriminate in their violence.

Noor Haba claims the military came to her small village of 3,000 and killed half of the people there. “They started killing and burning. They shot us from helicopters, and one air attack killed my husband,” she says. “Our houses were completely burnt to ash.”

Mrs Begum and Mrs Haba describe a desperate flight into Bangladesh through the forest and across the Naf river, where boatmen and brokers took payments of about $25 to ferry people across.

On Monday, the office of Aung San Suu Kyi said it had detained several police officers over a video showing security forces rounding up Rohingya villagers and beating them.

International agencies have condemned what is happening in Myanmar. Last month, Amnesty International accused the country of engaging in a “campaign of violence against Rohingya people that may amount to crimes against humanity”.

The International Organisation for Migration has said that about 21,000 people fled Myanmar for Bangladesh between October 9 and December 2. Human Rights Watch has estimated that at least 1,500 buildings had been destroyed as of early December.

In recent weeks Aung San Suu Kyi has talked of her administration’s “serious commitment to the resolution of the complex issue and the need for time and space for the government’s efforts to bear fruit”. In August, she set up a special commission headed by Kofi Annan, the former UN secretary-general, to tackle the Rakhine troubles. But the Myanmar government has been criticised for appointing Myint Swe, the vice-president and a former general, to head a team investigating the latest events in Rakhine.

“While the military is directly responsible for the violations, Aung San Suu Kyi has failed to live up to both her political and moral responsibility to try to stop and condemn what is unfolding in Rakhine State,” says Rafendi Djamin, Amnesty International’s director for Southeast Asia and the Pacific.

Aung San Suu Kyi’s supporters point out that she does not control the army, which still enjoys wide formal and informal powers in Myanmar’s political system. She is also seen as wary of antagonising Rakhine’s Buddhist community or a wider public stoked by anti-immigration and anti-Muslim rhetoric, some of it from militant monks.
The attacks on security forces have led to a debate about whether some kind of organised Rohingya insurgency is under way, with or without foreign backing.

A recent report by the International Crisis group claimed that members of the Rohingya group that attacked frontier security forces have international links to Pakistan and Saudi Arabia. Before the attacks, some fighters had received training that included the use of weapons and improvised explosive devices, the report said.

The crisis is also causing problems for the Bangladeshi government. It is struggling to cope with the numbers coming into the country and, according to Amnesty International, has even begun pushing people back into Myanmar.

Several refugees who spoke to the Financial Times said they were receiving minimal help from the Bangladeshi government, with many thousand cramming into undocumented camps helped only by aid agencies.

Col MM Anisur Rahman, the regional army commander in Bangladesh, says: “This problem was initiated by Myanmar. They have created this problem, they have to solve this problem.”

But it is those now living among the bamboo and corrugated-iron huts of the Bangladeshi camp who have to deal with the aftermath of the clearances.

Dudu Mia, the camp chairman at Leda and a Rohingya who fled to Bangladesh in 2003, says: “This is the worst violence I have ever heard about in Myanmar.”