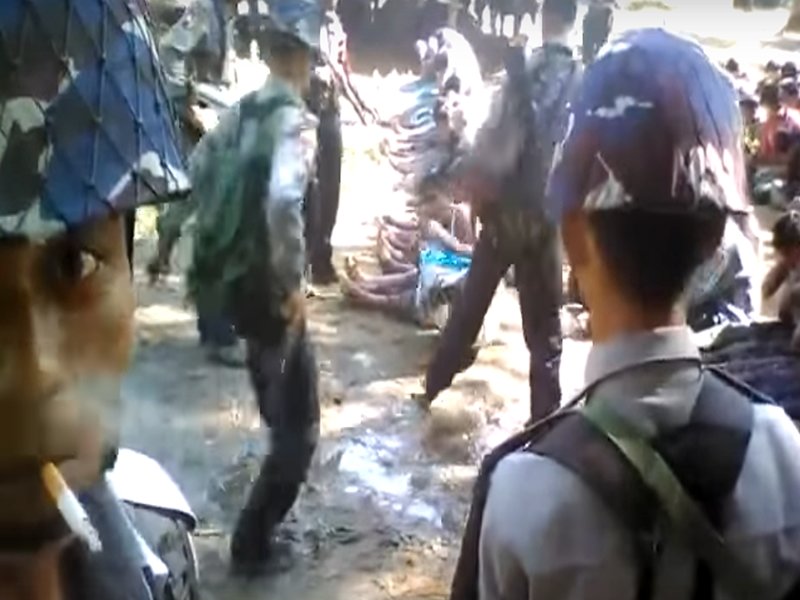 The video, which was shared across social media and also aired by state broadcasters in Myanmar, showed several policemen kicking and beating two Rohingya villagers who were among dozens of people who were instructed to line up for questioning.

A young boy was also seen being hit on the head by police where villagers were seated on the floor with their hands behind their heads.

The footage, which was taken selfie-style by one of the police officers offers a rare glimpse into the area, which has been cut off to aid organizations since October.

Nobel Peace Prize winner Aung San Suu Kyi’s government has been accused by human rights groups of turning a blind eye to mass executions, rape and ethnic cleansing of the Rohingya community carried out by the country’s security forces.

In a rare move, Suu Kyi’s government acknowledged the incident and video, stating that it occurred during a clearance operation on November 5 last year in northern Rakhine, according to Reuters.

Four officers were identified from the video, including the leader of the police operation and one individual who was seen beating the villagers.

“Action will be taken against police who allegedly beat the officers,” the government’s office said. “Further investigations are being carried out to expose other police officers who beat the villagers.”

According to Reuters, four policemen were arrested on Monday for their alleged involvement in the beatings.
Amnesty International has condemned the country’s hardline Buddhists for violence and discrimination against Rohingya Muslims who the human rights group says are routinely persecuted.