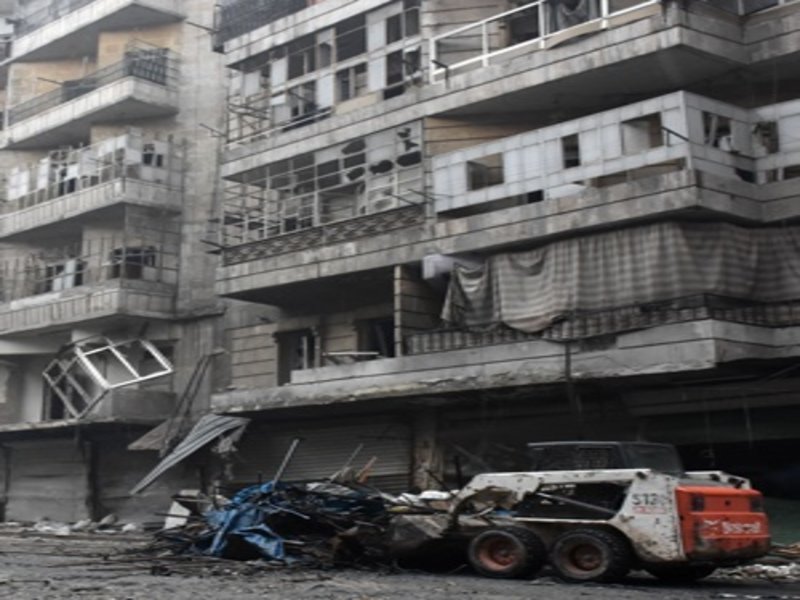 Beirut – Syria’s army advanced on Monday as it battles to capture a rebel region that is key to the capital’s water supply, launching strikes and artillery fire threatening a fragile nationwide truce.

Brokered by regime ally Russia and opposition supporter Turkey, the ceasefire is now in its fourth day despite sporadic violence and continued fighting in the Wadi Barada area near Damascus.

“Regime forces and fighters from Lebanon’s Hezbollah group are advancing in the region and are now on the outskirts of Ain al-Fijeh, the primary water source in the area,” said Rami Abdel Rahman, director of the Syrian Observatory for Human Rights monitor.

The monitor said government forces were carrying out air strikes and artillery fire on the area, northwest of the capital, and that two civilians were shot dead by snipers.

Water infrastructure
Two other civilians were killed in regime bombardment of the town of Rastan in central Homs province, it added.
Government forces have surrounded Wadi Barada since mid-2015, but the siege was tightened in December as the army piled on the pressure.

The Syrian government says rebels have targeted key water infrastructure, causing leaking fuel to poison water supplies and then cutting it off altogether.

The UN says at least four million people in Damascus have been without water since December 22.
The Observatory said around 1 000 women and children fled the area over the weekend.

The violence threatens the delicate truce that came into force last week and is intended to pave the way for new peace talks in Kazakhstan later in January.

In a statement, rebels fighting under the Free Syrian Army banner in Wadi Barada warned that the truce was in danger.

“We call on the sponsors of the ceasefire agreement to assume their responsibility and pressure the regime and its allied militias to stop their clear violation of the agreement,” the statement said.

Otherwise, they warned: “We will call on all the free military factions operating inside Syria to overturn the agreement and ignite the fronts in defence of the people of Wadi Barada.”

Military interventions
The statement said that Wadi Barada was included in the deal brokered by Moscow and Ankara and accused the regime of violating the agreement.

The ceasefire deal, and the plan for new talks, received the unanimous backing of the UN Security Council on Saturday, despite offering a competing track to UN-sponsored negotiations.

Turkey and Russia are organising the talks in Astana along with regime ally Iran, and say they are intended to supplement, not replace, UN-backed negotiations scheduled to resume in February.

Despite backing opposite sides in Syria’s conflict, Ankara and Moscow have worked closely in recent months on the war, brokering a deal to evacuate civilians and surrendering rebels from Aleppo last month before the regime recaptured the northern city in full.

Both countries are also waging their own military interventions in Syria, with Russian forces fighting to bolster President Bashar Assad’s government since September 2015.

The Syrian conflict has also spilled over into Turkey, with several attacks blamed on Kurdish or IS.

On Monday, IS claimed responsibility for a New Year’s Eve attack on an Istanbul nightclub that killed 39 people.

Turkish Deputy Prime Minister Numan Kurtulmus warned that Ankara was determined to press on with its military operation in Syria “until these terror organisations no longer remain a threat to Turkey”.

A string of efforts to find a political solution to Syria’s war have failed since it began with anti-government protests in March 2011.

The conflict has killed more than 310 000 people, and displaced over half the population, including millions who have fled abroad, becoming refugees.