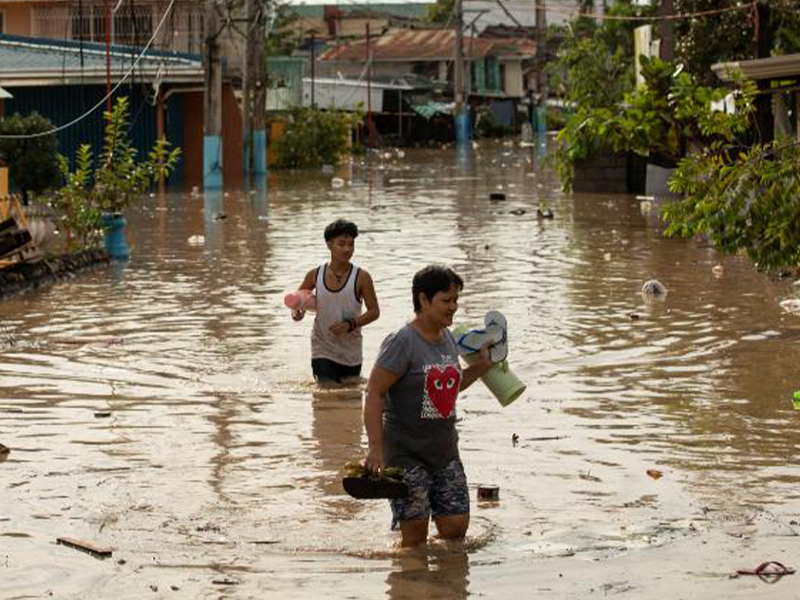 Five rescue workers have died in the aftermath of Typhoon Noru, which made landfall in the Philippines Sunday and is predicted to gather strength again before hitting Vietnam on Tuesday.The typhoon, known locally as Typhoon Karding, intensified rapidly from Saturday to Sunday, arriving as a super typhoon with maximum sustained winds of 240 kilometers per hour (about 150 miles per hour).It blasted the main island of Luzon on Sunday, before weakening on Monday to maximum winds of 167 kilometers per hour (104 miles per hour) according to the US Joint Typhoon Warning Center — equivalent to a Category 2 typhoon.

Residents wade through submerged streets after Typhoon Noru in San Miguel, Bulacan province, Philippines, on September 26.The government has recovered the bodies of the five rescue workers who were killed in the country’s northern Bulacan province, according to Richard Gordon, chairman of the Philippines Red Cross.He said landslides are expected in more rural and mountainous regions, adding to the fear of further casualties.Photos from Luzon show residents wading through chest-level floodwater to carry their belongings from their submerged homes.Others showed rows of tents set up in schools and gymnasiums being used as evacuation centers, where 13,600 families retreated to avoid the flooding, Gordon said. Images and video from the island show destroyed houses and debris littering the road.So far, the Red Cross has mobilized 2,000 volunteers in the affected areas to provide food and other relief supplies.

Schools and businesses were closed in Luzon on Monday, and President Ferdinand Marcos ordered supplies to be airlifted and clean-up equipment provided to most-affected communities.”The point at which we can stand down is when the majority of evacuees are already back home,” Marcos said at a news conference with disaster management officials on Monday.

Noru is now moving away from Luzon island and is forecast to re-intensify before it makes landfall over Vietnam on Tuesday.Luzon, which accounts for more than two-thirds of the economy and roughly half of the country’s 110 million population, started clean-up operations as floods in the capital region had started subsiding, officials said.Marcos, who will conduct an aerial inspection later on Monday, also ordered officials to provide emergency power supply to two provinces north of the capital, Aurora and Nueva Ecija, which were left without electricity.Multiple regions were “impacted by internet outages corresponding to power cuts after super typhoon Noru makes landfall,” according to internet connectivity monitoring service Netblocks.