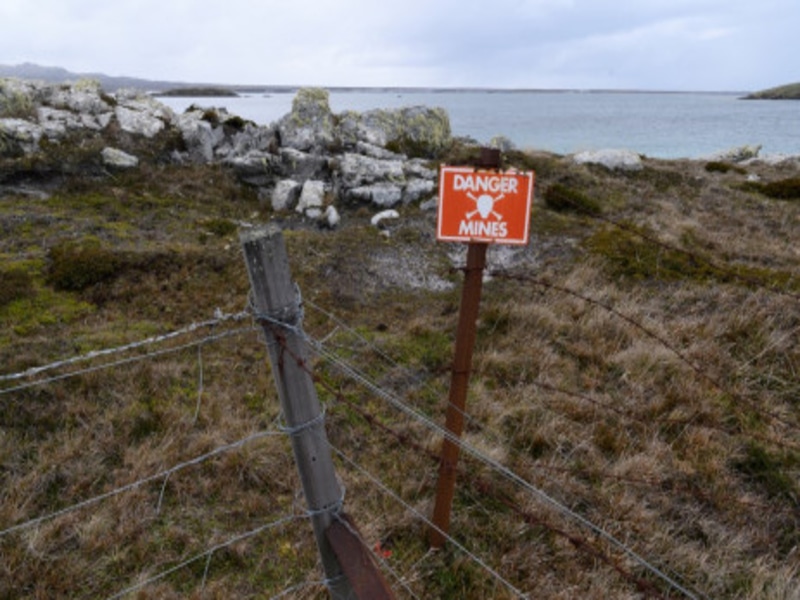 The Falkland Islands have been cleared of landmines, 38 years after the end of the conflict between Britain and Argentina, the UK government announced on Tuesday.

Thousands of landmines were laid during the 1982 war for control of the remote archipelago in the South Atlantic Ocean, and warning signs and fences have been a feature ever since.

But the government said the islands – in British hands since 1833 – were now “finally free” of the ordnance after a demining programme finished three years ahead of schedule.

The UK-funded programme was launched in 2009 and carried out by a team of mostly Zimbabwean deminers.

Residents will celebrate by playing cricket and football on a beach previously left inaccessible by the lethal unexploded ordnance.

One islander will be chosen in a raffle to detonate the last remaining mines and an Royal Air Force flyby will mark the handover of the final area cleared, Gypsy Cove, on 14 November.

“Thanks to UK efforts there are no more dangerous anti-personnel mines on the Falklands Islands,” Foreign Secretary Dominic Raab said.

Wendy Morton, the UK minister whose portfolio includes responsibility for the Falklands, called the completion a “huge achievement” and paid tribute to the deminers.

Britain has committed to rid the world of landmines and pledged £36 million ($48 million, 40 million euros) to global demining projects, she added.

The conflict was Britain’s last colonial war, and was sparked by an Argentine invasion to assert territorial claims over the islands it calls the Malvinas.

In 10 weeks of fighting, 649 Argentinian military personnel and 255 British troops were killed as well as three Falklands islanders.

The demining team from Zimbabwe, with supervising staff from British companies SafeLane Global and Fenix Insight had to contend with challenging physical conditions.

They often worked in remote locations and through unpredictable and sometimes extreme weather.

“As a company we could not be more proud of our deminers who have risked their lives to rid the Falkland Islands of this explosive threat,” he added.

“We will also remain forever grateful to the people of the Falkland Islands for welcoming us and looking after us.”

The head of UK charity Mines Advisory Group, Darren Cormack, welcomed the clearance but said unexploded weapons of war remained a problem across the world.

“Nineteen people are killed or injured every day by landmines and unexploded bombs and over half of civilian casualties are children,” he said.