‘We are on life support’: doctor makes desperate plea from yemeni city of hodeidah as humanitarian crisis worsens 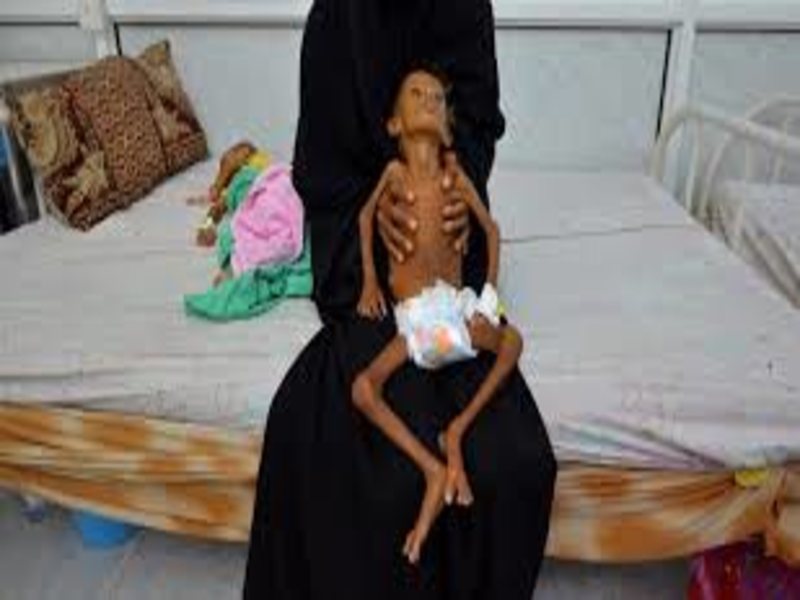 “Get out of the car”, was the last thing Dr Ashwaq Moharram heard before the scream of a missile ended in a deafening crunch of metal on the concrete behind her.

It was Saturday morning in Hodeidah, Yemen. She had just driven to work at al-Thawra hospital, one of the last remaining medical centres in the strategic Red Sea city that is now at the heart of the battle between a Saudi Arabia led coalition and Iran-backed Houthi rebels.

For several gruelling years Dr Moharram, a 42-year-old a gynaecologist by trade, has fought a one-woman battle to save some of Yemen’s 8.4 million people, who according to the United Nations, could starve to death if the country’s war rages on. She set up a mobile nutrition unit at the start of the conflict and toured the most battle-ravaged areas of north Yemen delivering food and supplements.

Nearly four years later the frontline, and famine, has finally come to her.

Speaking from her hometown, Dr Moharram described how shelling drew closer and a helicopter circled above firing missiles around the hospital building, located in the heart of the Houthi-controlled city.

“I heard an explosion and even louder screams yelling ‘Get out of the car, doctor, go back, go back, a strike’. The shelling was getting louder and my heart beat more and more in panic,” she told The Independent. “I looked in the car mirror and found that one of the missiles hit a building just behind me. This was not a one-off but rather a typical day of horror that we are living here.”

Until last week doctors at al-Thawra, like Moharram, were treating some 59 children.

Meritxell Relano, a representative for the United Nations’ child agency (Unicef) told The Independent all but 10, that are too sick to move, have been evacuated as the fighting has drawn close.

Hodeidah, currently home to some 300,000 people, has been one of the hardest hit by the hunger crisis, as food prices have shot up and supply lines ravaged in the conflict.

For the last five months the Gulf coalition and Yemen government troops it supports, have waged an intermittent campaign to seize the port from the Houthis.

Aid workers have warned that even if the fighting dies down, food prices are already soaring across the country, meaning a further five million could go hungry.

“Every time there is an escalation,that drives up speculation and worries about food and fuel. In Hodeidah, we’ve seen big spike in food prices,” Tamer Kirolos, Save the Children’s country director for Yemen, said. “Initially, we had 8.4 million who are severely food insecure and dependent on humanitarian aid. If prices continue to rise, we could see an additional 5 million people in need of food aid.”

The two sides have been fighting a disastrous war since the spring of 2015 when Saudi Arabia and its allies launched a bombing campaign to reinstate their ally president Abedrabbo Mansour Hadi who was ousted by Houthis.

There is little hope of an end to the fighting, which has sparked the worst humanitarian crisis in the world in terms of numbers and killed over 57,000 people according to a recent estimate by the Associated Press news agency.

More than 22 million people, or two-thirds of the population, now rely on some sort of aid to survive. According to Save the Children’s Kirolos we could see as many as 13.4 million starve, which is nearly half Yemen’s population.

Despite three days of uneasy calm in Hodeidah prompting hopes of a truce, a spokesman for the Saudi-led coalition confirmed on Thursday military operations are going ahead.

The day before Yemen’s recognised President Hadi had promised to support UN-proposed peace talks due in Sweden by the end of the year. But he also vowed to “liberate” Hodeidah “whether through peace or war”.

In the heart of the city aid workers like Dr Moharram struggle to keep the civilian population alive, while caught in the crossfire.

She runs a weekly food and milk distribution programme in the centre of the city, for the most starving children under the age of eight but even that was being impacted.

She said she is now having to ration the milk she dishes out as basic supplies, including nutritional supplements, were running out.

Meanwhile, food prices were so high their parents are now eating rotten food to survive, she described.

“Children who are 8 years old look like they were just two. Children under three years are mere skeletons weighing 6kg at most. The worst thing is being forced to take milk away from a hungry baby, and then hearing them scream, it’s haunting,” she said. “The situation is not just getting worse day by day but hour by hour.”

Many rely on her programme as al-Thawra has mostly been evacuated, while May 22 hospital, a private centre near the edge of the city, has been destroyed.

Muhammad Abdi, country director for the Norwegian Refugee Council, said there are also issues with water supplies as fighters had dug ditches in the streets and severed the pipes.

“Many are trapped in their houses because they don’t have the means to leave the city,” he added

Fearing that food prices will keep rising and millions more will go hungry, the UN’s World Food Programme (WFP) announced it was preparing to scale up its food assistance to reach 12 million people from the current 8 million.

David Beasley, the WFP’s executive director, who recently returned from Hodeidah, issued a heartfelt plea to both sides to end the fighting.

“In the name of humanity, I urge all warring parties to put an end to this horrific war. Let the children live and let the people start to rebuild their lives,” he said.

But there is little hope of a speedy resolution to the crisis. Officials from Saudi Arabia, the United Arab Emirates, US, and Britain met in Riyadh on Thursday to discuss the economic and humanitarian situation in Yemen.

While they agreed to support the UN’s efforts on economic confidence-building measures, little concrete was said about a ceasefire.

Sweden is reportedly preparing to host consultations when the parties “are ready to talk”. But as the week draws to a close, airstrikes are still pounding key areas around the city.

In the meantime, those living on the frontline are focused on just trying to survive.

“We are now basically on life support, eating whatever food was left, drinking the few drops remaining, and rationing medicine to avoid it running out,” she said.

“Yemenis are dying if not by bullets; by disease, poverty, and famine.”