Rohingya in Bangladesh pray to return home during Eid 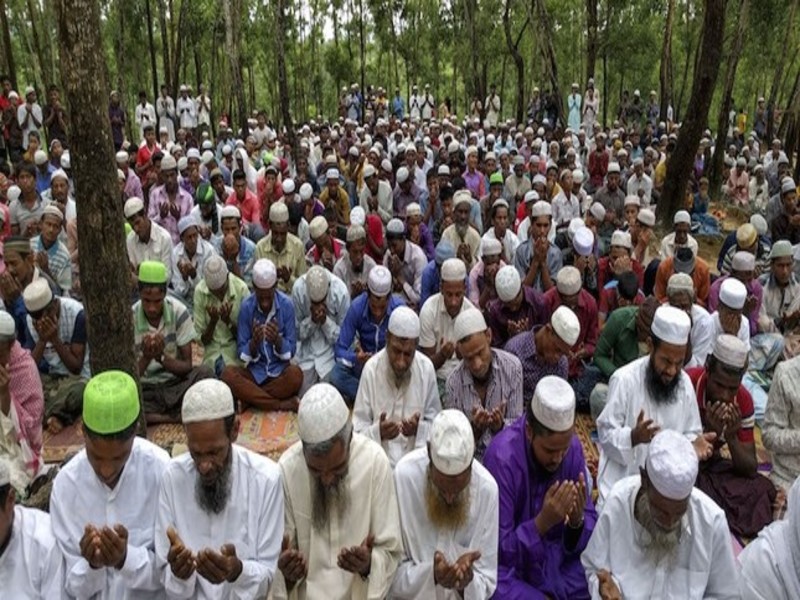 Rohingya refugees celebrated Eid Al-Adha after fleeing Myanmar’s state persecution last year at camps in southeastern Cox’s Bazar on Wednesday, with many praying for a chance to safely return to their homes.

In his special Eid prayer at a makeshift mosque at the Jamtoli refugee camp, cleric Sajjad Hossain said: “Oh Almighty! Give us the opportunity to go back to our own land with dignity and safety.”

Around 1,000 Rohingya Muslims attended the special prayer who all wished to return back to their homeland home as Myanmar citizens.

Hossain, 60, said he used to be the head of the Nawapara Hemaetul Islam Madrasah in Buchidawng in Myanmar’s Rakhine State before he was forced to flee to Bangladesh with his surviving family members following a brutal military crackdown on the Rohingya on Aug. 25 last year.

The cleric, who is a father of seven children, told Anadolu Agency said he had been unable to say his Eid al-Adha prayers and carry out the animal sacrifice ritual for the last four consecutive years in Myanmar due to government restrictions.

“We demand our repatriation as Rohingya but in the name of repatriation they took us to Myanmar several times where we were tortured and again sent back to Bangladesh,” Hossain said, recalling the repatriation processes since 1978.

“We demand the same does not happen again,” he said.

Last year, the governments of Bangladesh and Myanmar said they had agreed over the repatriation of Rohingya, promising to start the process within three months; however, no concrete steps were taken on the issue since then.

The lack of progress was criticized by international rights groups which also highlighted the safety issues confronting Rohingya wishing to return to Myanmar.

Another Rohingya survivor Abdul Aziz, 45, told Anadolu Agency that during Eid he had prayed for his 18-year-old daughter, Sufia, who was shot in the head and killed by the Myanmar army.

Despite the horrors he faced in Myanmar, he said he wished to return to his “motherland safely”.

“We don’t want to come back to Bangladesh once we are repatriated,” Aziz said.

He urged the Myanmar government to return their properties as well as guarantee their safe repatriation.

“We want to go back as Rohingya,” Aziz added.

Since Aug. 25, 2017, more than 24,000 Rohingya Muslims have been killed by Myanmar’s state forces, according to the Ontario International Development Agency (OIDA).

In its recent report titled Forced Migration of Rohingya: The Untold Experience, OIDA increased the estimated number of murdered Rohingya up to 23,962 (± 881) from the Doctors without Borders figure of 9,400.

According to Amnesty International, more than 750,000 Rohingya refugees, mostly children and women, have fled Myanmar and crossed into Bangladesh after Myanmar forces launched a crackdown on the minority Muslim community.

The UN documented mass gang rapes, killings ,including of infants and young children,brutal beatings, and disappearances committed by Myanmar state forces. In its report, UN investigators said such violations may have constituted crimes against humanity.