Where does the Kaaba’s Kiswa end up after its replacement on Arafat Day? 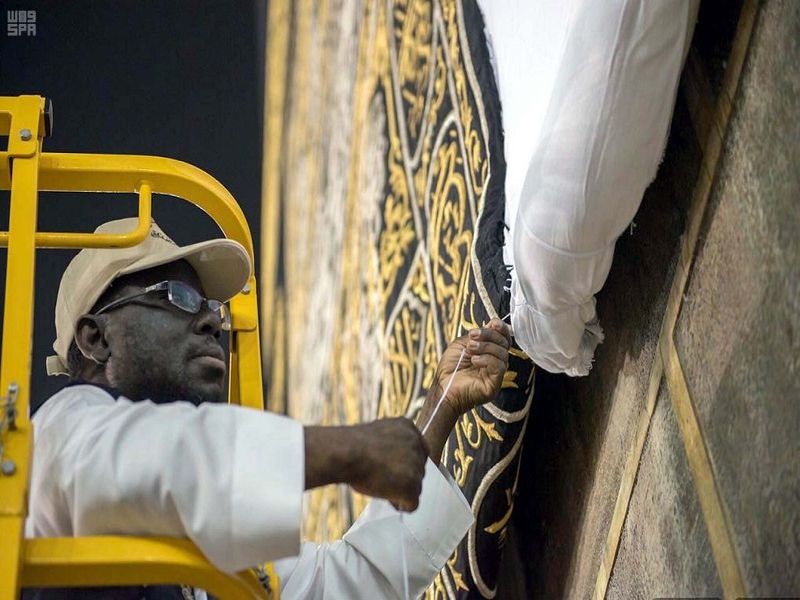 The Holy Kaaba was adorned with a new cover or “Kiswa” on Monday in an annual process carried a day before Muslims mark Eid Al Adha.

Every year, the gatekeepers of the Kaaba carry a delicate, precise task to change the silky black cloth embroidered with gold draped over the holy structure.

The Saudi Press Agency said 160 artisans and technicians have taken part in today’s re-adorning of the new cover, it said in a tweet.

Close-up pictures showed members of the team stand on a mobile escalator to place the fabric as they weave parts of it to fit on the structure.

The process occurs annually on the 9th of Dhul Hijjah, which marks the second day of Hajj.

On this day, as Muslims head to Mount Arafat to witness the most important ritual during pilgrimage, the Kaaba gets its old cover replaced with a new one.

But what happens to the old covering?
Ahmad bin Mohammed Al-Mansouri, the director-general of the King Abdul Aziz Complex for the Kaaba revealed in an interview with Al Arabiya English that the golden threads got removed on Sunday coinciding with the eighth day of Dhu Al Hijjah in the Islamic calendar, in accordance with the operational plan of the replacement of the old Kiswa with a new Kiswa on the dawn of Arafat day, Monday morning.

Immediately the old Kiswa undergoes a process where it is placed in a government warehouse providing the adequate technical conservation to prevent any chemical reactions or infiltration of bacteria in damaging the fabric.

Then if requested by the higher authorities, it is distributed in parts for museums or gifts.

Mansouri said that the Kiswa is made from about 670 kg of raw silk, which is dyed black, 120 kg of gold threads and 100 kg of silver threads. The Kiswa is covered with cotton-lined silk, while the Quran verses are sewed with the gold and silver threads.

The Kiswa is 14 meters in length and in its third quarter part there is a belt which is 95 cm wide and 47 m. long, consisting of 16 pieces surrounded by a square of Islamic designs. The Kiswa consists of 5 pieces, each piece cover a side of the square shaped Kaaba, while the fifth piece is the curtain which covers the entrance of the Kaaba.