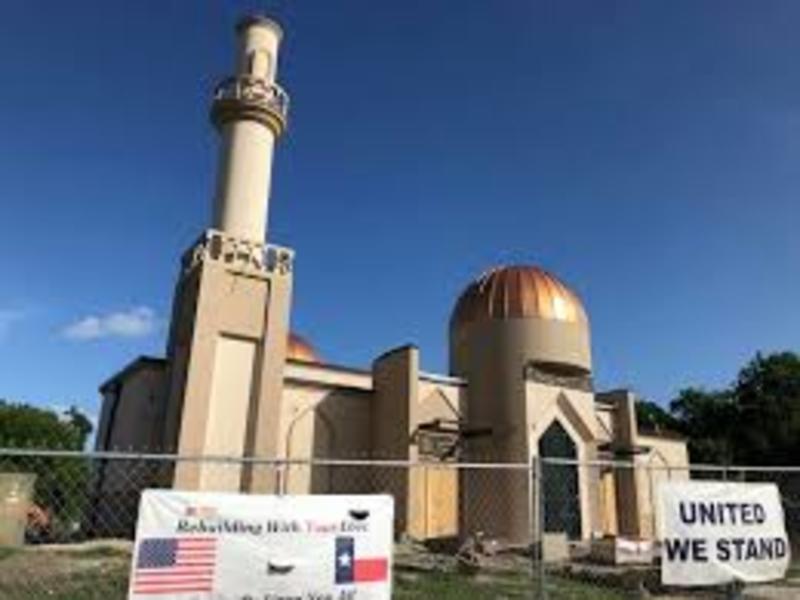 A 26-year-old man was convicted of a hate crime on Monday for burning down a mosque in Victoria, Texas, in January 2017.

A federal jury also found Marq Vincent Perez guilty of the use of a fire to commit a felony and possession of an unregistered destructive device in an earlier incident, in addition to the hate crime, according to the Department of Justice.

A witness who had been with Perez on the night of the fire said Perez was excited to see the Victoria Islamic Center in flames, and that he was “jumping up and down like a little kid.” Testimony included details about hate-filled messages on Perez’s Facebook account, and his use of slurs when referring to Muslims, according to the DOJ.

“The statements made by the United States Attorney’s Office before the trial and after indicate that the case was handled as a political trial and not as a criminal trial,” he said in a statement. “These include statements that the trial was about ‘diversity’ and ‘equal protection for Muslims’ which were inappropriate.”

Di Carlo said that the evidence allowed before the jury had been “very limited” and that Perez’s Facebook posts were “often taken out of context.”

During his five-day trial, state witnesses testified that Perez had planned and scoped out the mosque in the days before the fire. Authorities also found items taken from the mosque at Perez’s home, and an improvised bomb similar to what was used in an attempted car bombing before the fire, according to the DOJ.

Perez faces up to 20 years in federal prison for the hate crime and up to 10 for possessing an unregistered destructive device.

“While we are saddened by this hate-motivated crime against a house of worship, we are relieved that the arm of justice is long and bends toward what is right,” said Mustafaa Carroll, the Council of American-Islamic Relations-Houston’s executive director, in response to the verdict. “We thank all law enforcement agencies, first responders, the Victoria community, and all those who helped their Muslim neighbors.”

The congregation of the Victoria Islamic Center in Texas was devastated by the fire, but the east Texas community swiftly kicked into action.

The leaders of the local Jewish congregation gave them the keys to their synagogue so they could continue to worship. Local churches also offered the congregation a place to worship. A GoFundMe page set up to help raise money for the mosque’s reconstruction took in more than $1 million.

More than a year after the fire tore down the mosque, a new structure has been erected with a sign outside the construction fence that reads: “United we stand,” a photo posted on Facebook shows.

“All people are entitled to live free from violence and fear, regardless of their religion or place of worship,” said Acting Assistant Attorney General John Gore of the Civil Rights Division in a statement. “Perez’s actions were criminal, unlawful, and dangerous. This Justice Department is committed to holding hate crimes perpetrators accountable under the law.”