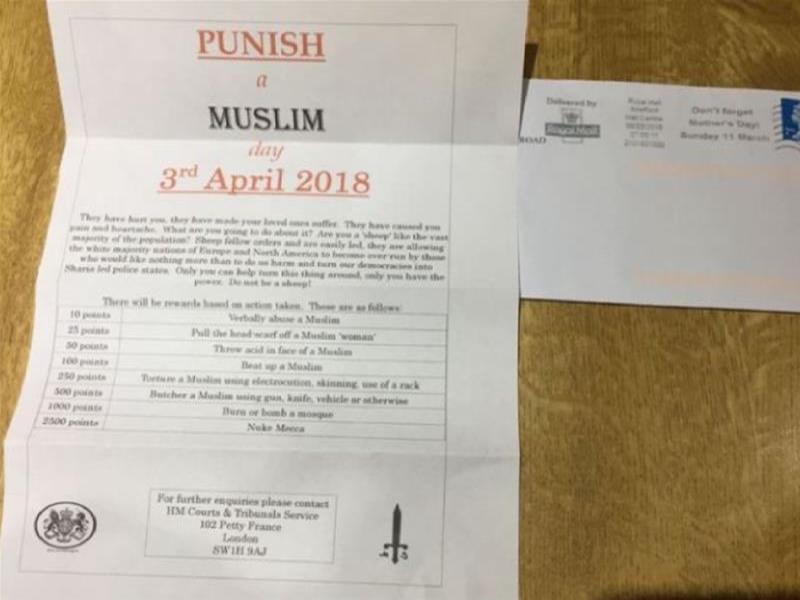 MSPs are to consider further action to tackle an “abhorrent” letter and social media campaign encouraging people to “punish a Muslim”.

Counter-terrorism police have been investigating letters sent out around the UK as a possible hate crime.

Images of the A4 notes, which contain a list of violent acts alongside a number of “points” for performing them, have been widely shared online.

There are fears the campaign may have led to physical attacks in Scotland.

Holyrood’s cross-party group on tackling Islamophobia is to discuss the “Punish a Muslim day” letters with Police Scotland representatives on Tuesday.

Concerns have also been raised about them in the House of Commons, with MPs describing the “abhorrent” letters as a “really urgent situation”.

No-one in Scotland is known to have received a copy, but Labour MSP Anas Sarwar said there has been a “spike” in racist and Islamophobic crimes in Glasgow.

‘Be more vigilant’
He told BBC Radio Scotland’s Good Morning Scotland programme that he knew of five “very serious” hate crimes in the city over the last 10 days.

In one case, he said a schoolgirl was asked if someone could rip off her hijab so they could film it and earn 25 points from the “Punish a Muslim” campaign.

Mr Sarwar said a woman was also assaulted outside a supermarket, where she was sworn at and told to go home.

Another woman was attacked in a shopping centre and a third was abused and assaulted on a train by three men.

“So all of these things – added to this Punish a Muslim campaign running on social media – is causing genuine fear and alarm,” the MSP added.

Mr Sarwar said he had been contacted by people unsure as to how to keep themselves safe next Tuesday – the so-called “punish a Muslim” day.

“What we’re trying to do is find a coordinated response, saying please go about your daily business as you normally would,” he said.

“Let’s not let these people change our everyday way of life, but be more vigilant, look out for your friends and family, and if you see anything, suspect anything or experience anything, please share that with the police.”

Earlier, Mr Sarwar said MSPs would be discussing the issue with police at the cross-party group meeting, where they will identify additional action to reassure people.

“We have a duty to stand against racism and prejudice in all its forms. MSPs will come together to show support and solidarity with the communities being targeted by this vile Islamophobic campaign,” he added.

Dr Muhammad Adrees, the convener of the Muslim Council of Scotland, said the letters were “a chilling reminder of the very real danger and hatred facing ordinary Muslims every day”.

He said: “Although there are no known recipients in Scotland, they have nonetheless caused considerable alarm and the community needs reassurance, especially since the letters have already triggered Islamophobic incidents here.

“Our advice to members of the public is to remain vigilant and alert but not alarmed. Go about your everyday business, taking some extra precautions. If you feel threatened or are at risk, contact the police immediately.”

‘Proportionate and measured’
Supt David Pettigrew, of Police Scotland, said: “Police Scotland is aware of the recent media coverage of letters received by some individuals in England over the past few weeks that are anti-Islamic in nature.

“While there are no known recipients in Scotland to date, Police Scotland recognise that there is the potential for a rise in fears amongst some community members and also for some incidents of hate to be perceived to have been caused by the publicity around the letters.

“Police Scotland officers are liaising with relevant forces and continues to monitor the situation.

“Regular reviews are being conducted and any action taken will be proportionate and measured, whilst being careful not to inadvertently raise any additional fears or concerns.”

Mr Sarwar has also been selected to raise the matter with Nicola Sturgeon at her weekly question session at Holyrood on Thursday.