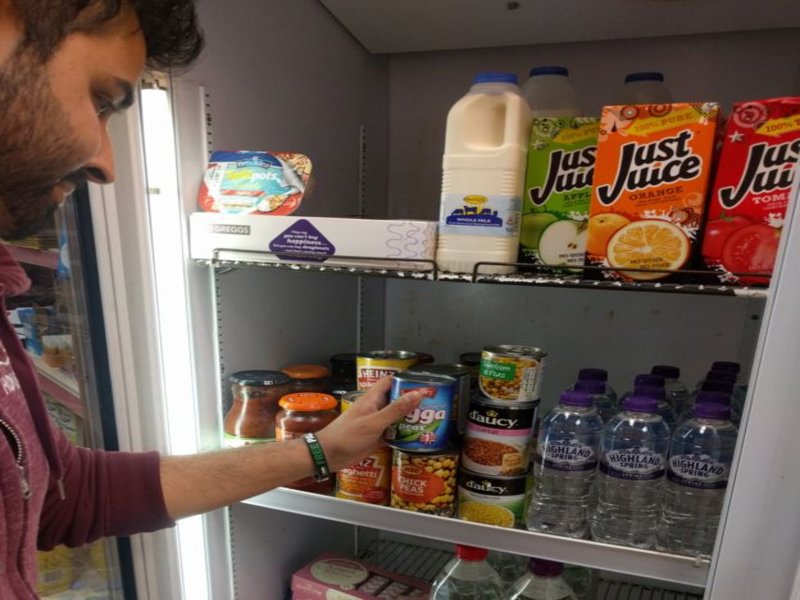 Narrated by Abu Musa Al-Ash’ari The Prophet said, “Give food to the hungry, pay a visit to the sick and release (set free) the one in captivity (by paying his ransom).” ( Sahih Bukhari)

As demand for food banks rises, Rekz Afzal has started filling one of the fridges in his shop with free food for people in need.

Rekz thinks community fridges could “take a lot of pressure off the food banks”.

“People in the community, no matter who they are, if they find themselves struggling, are able to take advantage of this fridge,” he says.

“It will get them by until they are feeling more secure.”

Customers can donate food directly to the fridge or fund it with spare change.

Rekz asks for proof that people who use the fridge are receiving help from the government before allowing them to take two items of food per day.

He says the community fridge concept has the potential to “shut down the food banks”.

“People feel more comfortable about going to their local shop than a food bank. They might not want to make their situation known,” he says.

“One of the main problems is access hours. The food bank in Paisley is only open three days a week – what do people do the other days?

“There are a lot more access hours to a community fridge than food banks. These shops are always open.

“My vision is to close the food banks, full stop. If food banks are only open for limited hours it’s not serving their purpose properly.”

Rekz says he’ll keep running his community fridge, which has between 20 and 30 users, regardless of whether the idea takes off nationwide.

“Nowadays there’s universal credit where people have to wait six weeks before they get anything – how do they survive for those six weeks?” he says.

“I feel there are a lot of gaps and community shops could fill those gaps.

“Small businesses only survive because the community supports them. When you as a business appreciate that and give back, it makes you totally complete within the community you serve.”