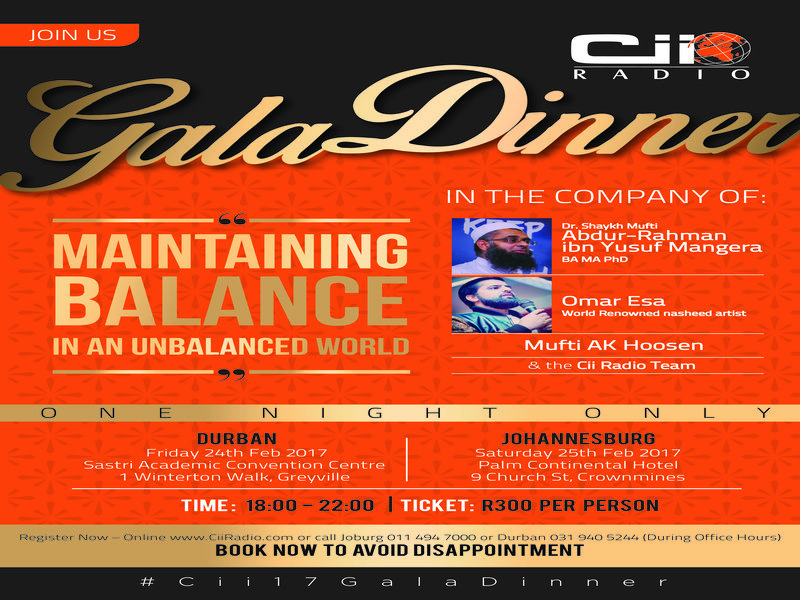 A night of inspiration and motivation. Come and enjoy an evening of spiritual enlightenment in the company of renown Guest Mufti Abdur Rahman ibn Yusuf Mangerah, and annasheed by Renown UK artist Omar Esa.

Cii Radio’s Mufti A.K. Hoosen will also be there along with the Cii Radio team. All this coupled with a scrumptious 5 course dinner.

An event not to be missed! The dinner under the theme ‘Maintaining Balance in an unbalanced world’ will be taking place in Durban on Friday the 24th February 2017 and in Johannesburg on Saturday the 25th February 2017. Diarize the date. An excellent opportunity to meet and greet the Cii Radio team.

Want to know more about the Guests?

Dr. Mufti Abdur-Rahman ibn Yusuf Mangera concise Bio
Dr. Mufti Abdur-Rahman ibn Yusuf Mangera is a British Muslim scholar educated in both the Islamic and Western traditions. He memorised the Qur’an by heart and graduated from the Darul Uloom seminary Bury, UK, and later earned a specialized licence to issue fatwa (legal responses) at Mazahir ‘Ulum Saharanpur, India. He earned his BA from the University of Johannesburg and completed his MA and PhD in Islamic Studies from the School of Oriental and African Studies in London. In 2013 he was awarded an honorary fellowship at the Cambridge Muslim College and in 2016 at The Royal Aal al-Bayt Institute for Islamic Thought, Amman, Jordan. Shaykh Abdur-Rahman has the unique experience of serving as an imam in Muslim communities on both sides of the Atlantic, eight years in Southern California and over five in the great city of London—and his continued work as an international speaker and lecturer enables him to address and offer advice on current challenges that face Muslims in the West. He is an avid traveller and continues to teach hadith and work on scholarly publications through White Thread Press (www.whitethreadpress.com). Many of his lectures are available on www.zamzamacademy.com and his courses through Rayyan Institute (www.rayyaninstitute.com)

Omar Esa Concise Bio
Omar Esa is a nasheed artist from England, who uses only his voice in all his nasheeds and recites nasheeds in mainly the English, Urdu and Arabic languages. His nasheeds are very versatile thanks to Allah (subhanahu wa ta’ala), as he can write both contemporary and traditional sounding nasheeds Alhamdullilah. Omar Esa writes, composes and sings all his own material and is an artist who wants to spread Dawah through his words and melodies in His Nasheeds. Omar Esa believes the voice is the most powerful tool we have as Muslims and lives by his slogan “whatever music can do , so can the voice”

In July 2011, he was blessed by the grace of Allah (swt) and guided to the right path, and since then has been using his wonderful talent to spread the beautiful message of Islam. His entry into the world of Nasheeds was an instant success, being awarded in the GNAA Nasheed Competition in October 2011. He released his first Album titled Omar Esa in November 2012. He has now been nominated for 3 MOMO (Music of Muslim Origin) awards in the categories of Best Album, Best Nasheed Single and best British Solo Artist. He also presents his own TV show on Islam Channel called ilmtube. He has collaborated with renowned Nasheed artists such as Abdullah Rolle and is currently working on revolutionising the nasheed industry with the release of a ‘Mixtape’ for FREE distribution, a world first for the Nasheed Industry.

Click here for a sneak peak of Omar Esa’s Nasheeds

2 thoughts on “Maintaining balance in an unbalanced world #Cii17GalaDinner”