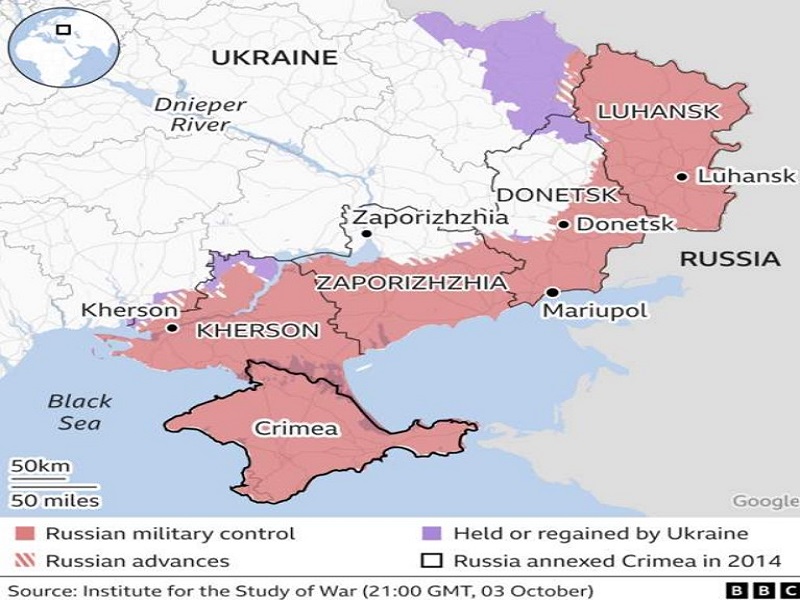 5 October 2022
More now on the fighting on the ground.

Ukraine says it has made major advances in regions Russia declared annexed. Its forces are pushing south along the west bank of the Dniepro river, and are said to be consolidating their progress in the north-east.

Among the gains, Ukraine says it recaptured a key village in the Kherson region, its forces raising the national flag in celebration.

Russia continues to mount attacks against Ukraine, with Ukrainian officials reporting that a town south-west of Kyiv was targeted with explosive drones, injuring one, as well as attacks in other areas including the city of Zaporizhzhia.

Ukraine touts progress: President Volodymyr Zelensky said the country’s forces were making rapid progress in three regions against Russian forces. He said Ukraine had recaptured dozens of towns in the south and the east. It is difficult to independently verify the claims, but the UK’s Ministry of Defence made similar comments.

Putin signs annexation bill: Russia’s President Vladimir Putin signed legislation annexing four regions of Ukraine, a move illegal under international law. Russia does not fully control the regions, and two of them are where Ukraine says it is making advances.

Nuclear worries: The United States has no indication that Russia is preparing to use nuclear weapons in the Ukraine conflict, the White House says. Putin has warned he is not bluffing about his threat to use nuclear weapons. British Foreign Secretary James Cleverly says his country will listen carefully to the threats but Putin has “a long history of sabre-rattling”.