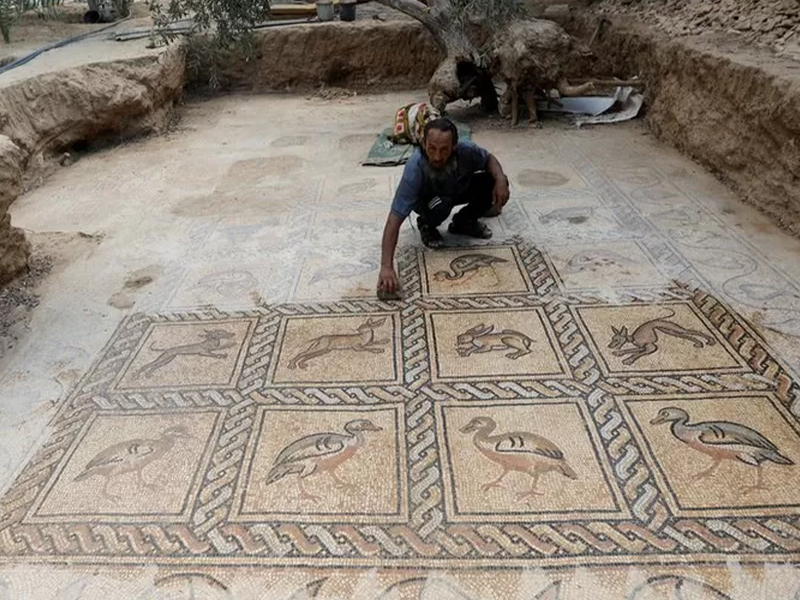 A Palestinian farmer has discovered an ornate Byzantine floor mosaic while trying to plant an olive tree on his land in the Gaza Strip.

Salman al-Nabahin said he and his son had been digging into the ground when they unearthed the relic.

Experts have called it one of the greatest archaeological treasures ever found in Gaza.

Mr Nabahin told Reuters news agency he had realised the mosaic belonged to the Byzantine era after searching on the internet.

The Byzantine Empire was the eastern half of the Roman Empire, which can be traced back to 330 AD, and survived for more than a thousand years.

“I see it as a treasure, dearer than a treasure. It is a Palestinian legacy,” Mr Nabahim said.

Archaeologist René Elter, from the French Biblical and Archaeological School of Jerusalem, told the Associated Press the mosaic was “exceptional”.

“These are the most beautiful mosaic floors discovered in Gaza, both in terms of the quality of the graphic representation and the complexity of the geometry,” he said.

“Never have mosaic floors of this finesse, this precision in the graphics and richness of the colours been discovered in the Gaza Strip.”

The Palestinian Ministry of Tourism and Antiquities said international experts were being brought in to complete the site’s excavation.

The Gaza Strip was once a bustling trade route for civilisations. It is rich with antiquities.