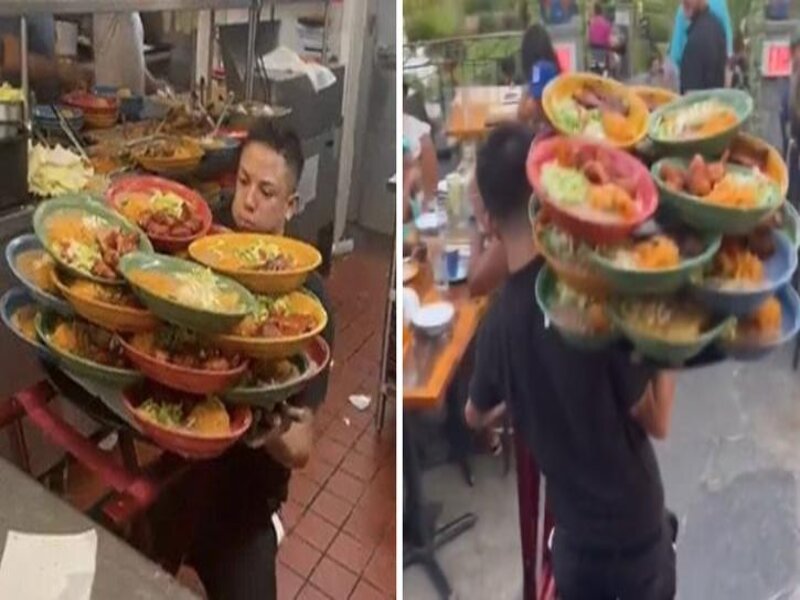 A waiter has gone viral after he was seen carrying dozens of plates to serve multiple customers at once.

In the video, the waiter was seen lifting more than a dozen plates to serve customers at a restaurant. First, he picks up the tray stacked with multiple plates in the kitchen. He then carries all the plates in one hand above his shoulder and travels a good distance to reach an open area of the restaurant.

What is more incredible is the fact that he carried an ‘insane’ amount of plates on his shoulder for almost a minute.

The waiter was able to balance all of the plates on just one of his arms by stacking them in a circular formation.

“Take pride in your work and whatever you do, do it well,” the video caption reads. It has garnered more than 6 million views and tons of comments.

“He doesn’t need to do it this way. Just bring the orders out 3-4 plates at a time. It’s easier and prevents spectacular accidents en route. Who is he trying to impress?” one user said. “No matter what we do the reality is nothing extra paid then why wasting energy.. quite quitting,” another user commented. “Worked at a resort for 4yrs with 10 restaurants. I can tell you, what he did here is NOT easy!!” another user added. “It needs strength. Not everybody’s cup of tea,” another said.