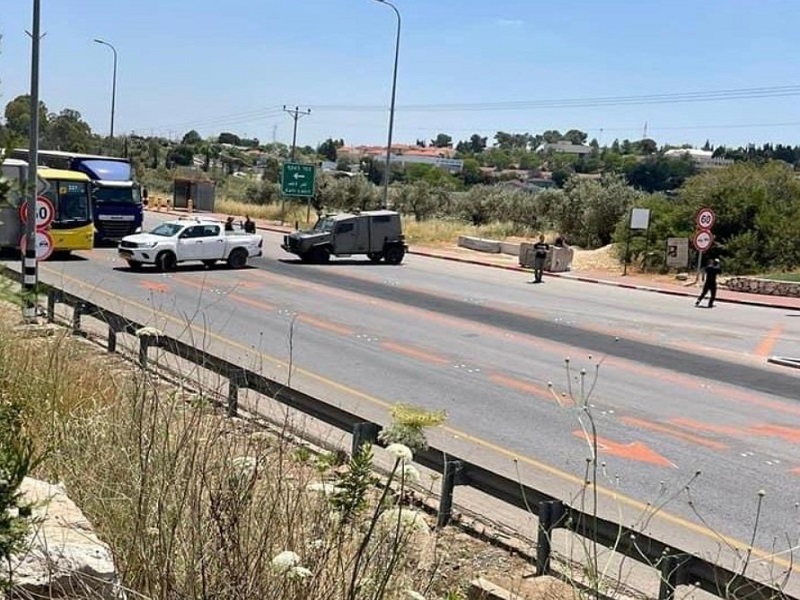 The suffering of the residents of the village of Kafr Laqif, east of Qalqilya in the north of the West Bank, is increasing day by day due to the frequent nighttime Israeli army incursions and the checkpoints that impede their movement, especially the flying checkpoints that the army keeps putting up on a daily basis since two weeks at the main entrance to the village.

Aziza Assaf, an employee, is one of those residents who suffer every day because of the occupation checkpoints. One day, as she drove her car across a flying checkpoint, one of the soldiers pulled the iron spike barrier placed on the ground thus piercing her tires and causing her to be late to work for about three hours.

Ahmad Hourani, who drives a truck transporting food supplies to and from the village, was also harassed by the soldiers at the checkpoint. “I am subjected to rude treatment and a thorough inspection of the goods I carry, which may take hours, and to make matters worse, the occupation forces deliberately damaged the tires of my truck recently, which means I had to spend lots of time repairing the damage,” he said.

Ali Darbiah, from the neighboring village of Jinsafut who owns a chicken farm in the village, says that every morning he goes to work, the soldiers hold the four young people who accompany him to work under the pretext of security checks and do not let them go before they are searched.

“This matter has become a burden for the farmers, especially since there is no other entrance to the village that people can take to avoid passing through this checkpoint,” he said.

As for the university student Heba Abdullah, she chose to walk three kilometers to reach the checkpoint and to board a taxi waiting for her at the other end of the checkpoint to avoid the long and humiliating wait and delay at the checkpoint if she drives a car or take one from the village.

The strategic location of the village made it the focus of the occupation’s ambitions. It is located on the main street that connects Qalqilya governorate to the Nablus governorate, near a large settlement block called Karnin that includes the Karni Shomron, Ginat Shomron, and Ma’ale Shomron settlements, which separate the Qalqilya and Salfit governorates.

The head of the Kufr Laqif village council, Nayef Jabr, says that the village is suffering from a fierce attack as the occupation forces surround it and storm it morning and evening using firearms, sound bombs and tear gas grenades that cause suffocation and frighten the people.

He says the occupation forces claim that young people from the village threw stones at their patrols, but this is not true. Rather, it is a justification for imposing a policy of collective punishment through which the occupation seeks to control the village’s lands, and extend its authority over it in various ways, he insists.

According to the official in charge of the settlement file, Muhammad Abu al-Sheikh, “the occupation seized approximately 500 dunums of the village lands, out of its area of 2809 dunums. Construction is permitted only on an area of 341 dunums, which prevents any possibility of urban expansion in the village.”

He says that the pace of settlement activity is constantly increasing, not only in the village of Kufr Laqif but in the governorate as a whole.

Since the beginning of this year, he added, 51 warnings against construction have been issued to residents in the governorate, and three demolitions have been carried out.