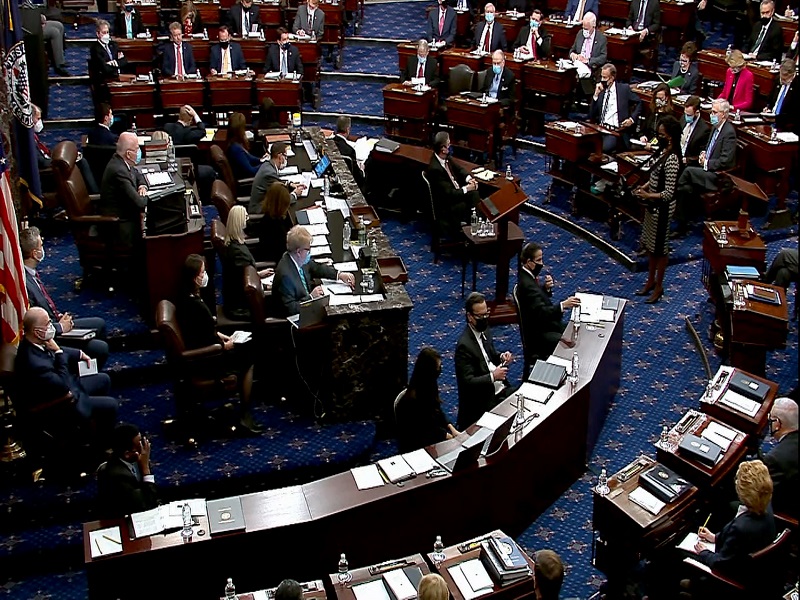 The 2nd impeachment trial of Donald Trump has already begun in the U.S Senate. The Senate voted to adopt the rules agreed upon by leadership to govern the trial.

“It has been agreed to by House managers, the former President’s counsel, and co-sponsored by the Republican leader, it is bipartisan,” Senate Majority Leader Chuck Schumer said as he introduced the organizing resolution.

The organizing resolution sets the schedule for the trial. There will be a vote at a simple majority threshold to affirm the proceedings constitutionality, i.e. whether it’s actually constitutional to try a former official, even though that has been done before, this is still the first impeach trial of a former President.  After that, each side has up to 16 hours for presentation. Then there are four hours for senators’ questions. If there’s a request for witnesses by the House impeachment managers, there will be two hours of debate after the question period, followed by a vote on whether to call a witness. The proceedings will wrap up with four hours of closing arguments, evenly divided, before a decision is made by vote for either a conviction or an acquittal of the charges.

Trump is the only US President to have ever been impeached twice.  It’s just the fourth impeachment trial in US history and Congress has conducted three presidential impeachment trials to date: President Andrew Johnson in 1868 for firing a Cabinet secretary without the consent of Congress; President Bill Clinton in 1998 for perjury and obstruction of justice; and President Trump in 2020 for abuse of power and obstruction of Congress.

Johnson, Clinton and Trump were acquitted, so they stayed in office. It will aim to answer whether one can incite an insurrection with impunity.