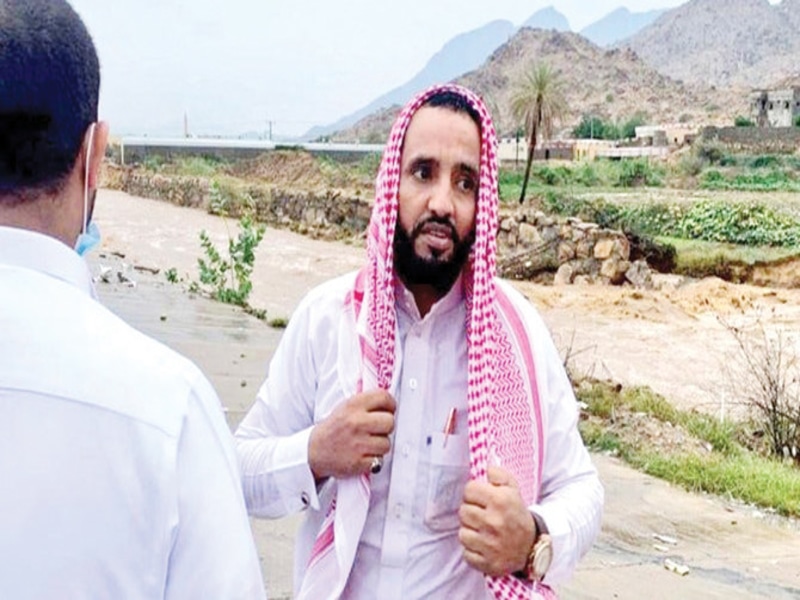 The moment a Saudi man leapt into a raging river without any consideration for his own safety – and unable to swim – to rescue a drowning child has been captured on video.

The child had fallen from the banks of the river into the waters below and swept away, barely noticeable as the river dragged him down stream – his head just above the surface of the murky water that had churned up the sand below, people on the banks watched on in horror.

Then Amer Al-Shehri did the unthinkable and jumped into the raging torrent, without any consideration for his own safety and despite being a non-swimmer.

First he seems to be swept away, but in little time he somehow manages to make his way over to the child.

Others then jump into the shallows by the shore and help pull the boy out.

Ahad Tharban, located northwest of Asir, had recently been hit by persistent heavy rain, causing rivers and streams to burst their banks – the local authorities urged people to keep away from dangerous areas.

Al-Shehri told Arab News that he had just left the mosque after Friday prayers when he saw the boy fall into the raging river.

“I knew the child was in danger from the moment I saw him in the stream,” the hero explained.

He said that a few other people also fell but were able to make it out quickly, but the boy was swept down by the sheer force of the water.

“I didn’t think about this at all,” he said, adding: “All I could think of was I need to get the boy out of there right away.”

He said: “I advise everyone who is near the valley with their family and children to stay far away from the edge.”

His heroic actions have received praise from people who have seen the video, tweeting with the Arabic hashtag for “The hero Amer Al-Shehri.”