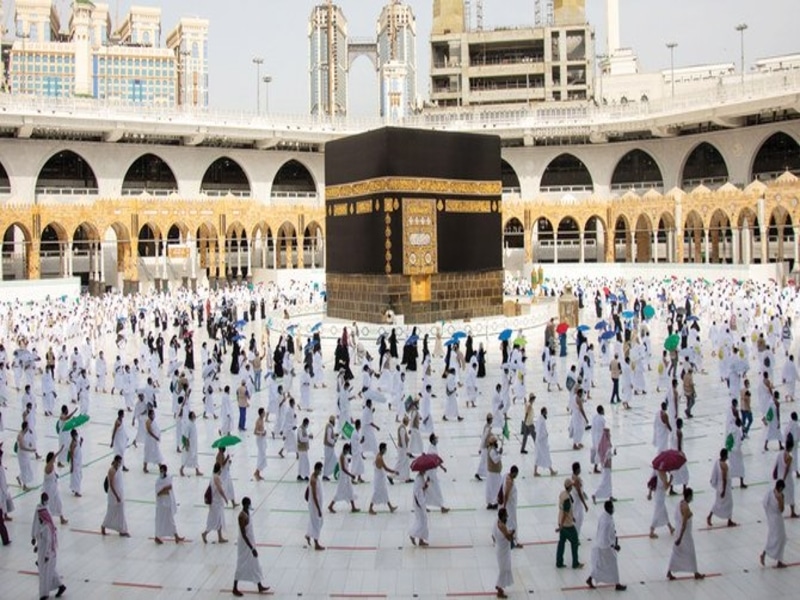 As the Kingdom begins to reopen for business, many Saudis and expatriates have found the gradual resumption of Umrah a welcome sign, but remain vigilant.

The resumption will take place in three phases, each one with a certain capacity and under constant supervision, similar to the standards enforced during the Hajj pilgrimage last August. Saudi Minister of Hajj and Umrah Dr. Mohammed Saleh Benten said that “the ministry is here to help the pilgrim.”

He also quashed rumours about the Kingdom imposing any fees to book time slots.

The minister said that to fulfill the needs of pilgrims, every step is computerised using AI with the Ministry of Hajj and Umrah launching a new Umrah application, Eatmarna, on Sunday. This will help to enforce health standards amid the COVID-19 pandemic, making it easier for pilgrims to book their Umrah provided they are cleared by the authorities.

Users downloading the app must also ensure they are registered with the Ministry of Health’s Tawakkalna app to check on the user’s health status and eligibility to perform Umrah rituals.

In an interview with Saudi National TV’s Al-Rased program, Dr. Mohammed Saleh Benten announced that the first phase will allow 6,000 pilgrims daily and will be divided into 12 groups across 24 hours. This is while maintaining social distancing measures with the help of the authorities to ensure that they receive the same care provided to pilgrims performing the Hajj pilgrimage, adding that it will be “more accurate, more precise with more precautionary measures in place,” he said.

“We’ve also designated the age groups be between 18-65 years old for those who are able to. Those who can’t will have wheelchairs ready for them to perform Tawaf and Saee, but the flow of the Tawaf (the act of going around the Kaaba seven times) will be consistent with the same speed and flow,” said the minister.

“We have an accurate implementation plan in place to facilitate the flow of residents from the 17th of Safar (Oct. 4) to perform the Umrah ritual,” announced Saudi Minister of Hajj and Umrah Dr. Mohammed Saleh Benten.

The minister said that the pilgrims would have a specific time period in which to perform the rituals.

“Pilgrims who will be arriving from outside Makkah, who booked hotels and residences, will be asked to meet at the check points 15 minutes before their scheduled departures to the Grand Mosque where they will be met by guides and health specialists to perform the rituals in a very specific time period within their booked time slots,” the minster said.

Cars will not be allowed to park inside the central zone around the Grand Mosque with the exception of those who live in the area. Pilgrims who are arriving by car but without a hotel booking will be able to accompany the designated group assigned to the time slot of choice by meeting them at the checkpoint and be transported by buses.

“Pilgrims arriving from abroad will receive the same treatment as the residents of Saudi Arabia. They’ll be able to book a time slot just as well and arrive knowing full well that they will be taken care of from arrival to departure,” the minster said.

Khairallah Al-Zahrani, a school teacher, said: “The decision to gradually resume Umrah after the rate of coronavirus cases has reduced to small numbers is a wise decision that meets both the demands of worshipers and the health measures for a safe Umrah.”

Al-Zahrani said that he had performed Umrah a number of times, and would not apply for an Umrah permit.

“There are many Muslims of different nationalities who are living in Saudi Arabia, and these people are dying to perform Umrah after that long period of suspension due to the pandemic,” he said.

He said that lifting the ban on Umrah in phases reflected what has been said about the safety of the visitors to the holy sites being the Kingdom’s top priority.

“This reflects the keenness of Saudi Arabia to keep the coronavirus under control until a vaccine is produced,” Al-Zahrani said.

Like Al-Zahrani, Sattam Jassar, a Yemeni dry-cleaning worker, told Arab News that he has been in Saudi Arabia for many years, and he was not willing to apply for an Umrah license.

“I have a feeling that this pandemic will soon end, and I can then comfortably perform Umrah. Many expats in Saudi Arabia whose residency permits have ended are preparing to get back to their countries. I believe these people should be given the chance to do their lesser pilgrimage since they may not find another chance to visit the Grand Mosque in Makkah,” Jassar said.

“This country is known to have never done anything against the benefit of pilgrims,” Jassar said.

On the other hand, Saleh Al-Qudaimi, a Yemeni family driver in his late fifties, said that he will do all he can to be among the first group to perform Umrah.

“You can’t imagine how impatient I am to wear the white clothes and circle the sacred Kaaba. This pandemic has deprived me of the pleasure I feel when in the Grand Mosque. I want to perform Umrah for at least one more time in my life,” he said.

He said that the Saudi authorities had succeeded in managing the last Hajj and they would do the same when resuming Umrah.

“With no COVID-19 case registered, the last Hajj was a success, and this could have not happened if there were no professional Hajj management. This management is going to make Umrah another success story, with the health measures the authorities are taking,” Al-Qudaimi said.