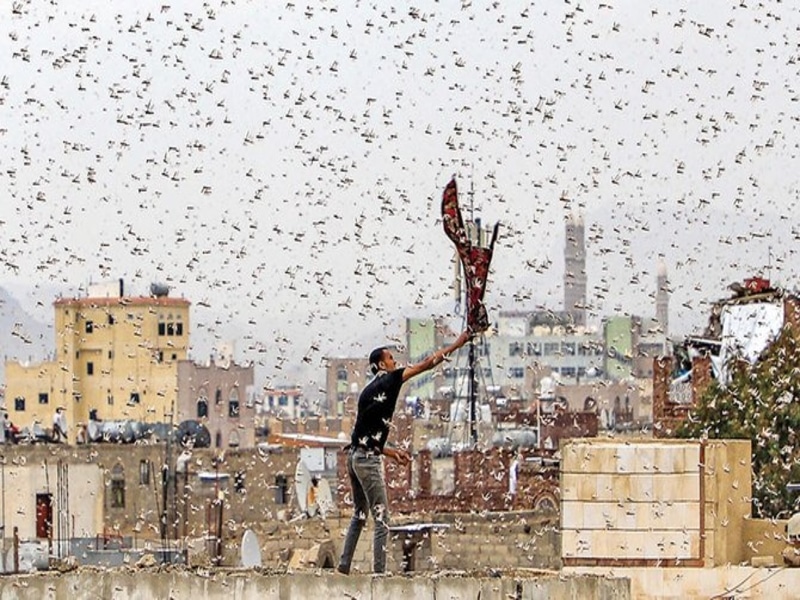 Locust swarms have swept over farms in central, southern and eastern parts of Yemen, ravaging crops and stoking fears of food insecurity.

Residents and farmers in the provinces of Marib, Hadramout, Mahra and Abyan said that billions of locusts had invaded farms, cities and villages, devouring important seasonal crops such as dates and causing heavy losses.

“This is like a storm that razes anything it encounters,” Hussein Ben Al-Sheikh Abu Baker, an agricultural official from Hadramout’s Sah district, told Arab News on Sunday.

Images and videos posted on social media showed layers of creeping locusts laying waste to lemon farms in Marb, dates and alfalfa farms in Hadramout and flying swarms plunging cities into darkness. “The locusts have eaten all kinds of green trees, including the sesban tree. The losses are huge,” Abu Baker added.

Heavy rains and flash floods have hit several Yemeni provinces over the last couple of months, creating fruitful conditions for locusts to reproduce. Farmers complained that locusts had wiped out entire seasonal crops that are grown after rains.

Abu Baker said that he visited several affected farms in Hadramout, where farmers told him that if the government would not compensate them for the damage that it should at least get ready for a second potential locust wave that might occur in 10 days.

“The current swarms laid eggs that are expected to hatch in 10 days. We are bracing for the second wave of the locusts.”

Last year, the UN said that the war in Yemen had disrupted vital monitoring and control efforts and several waves of locusts to hit neighboring countries had originated from Yemen.

Yemeni government officials, responsible for battling the spread of locusts, have complained that fighting and a lack of funding have obstructed vital operations for combating the insects.

Ashor Al-Zubairi, the director of the Locust Control Unit at the Ministry of Agriculture in Hadramout’s Seiyun city, said that the ministry was carrying out a combat operation funded by the Food and Agriculture Organization in Hadramout and Mahra, but complained that the operation might fall short of its target due to a lack of funding and equipment.

“The spraying campaign will end in a week which is not enough to cover the entire plagued areas,” Al-Zubairi told Arab News. “We suggested increasing the number of spraying equipment or extending the campaign.”

He said that a large number of villagers had lost their source of income after the locusts ate crops and sheep food, predicting that the outbreak would likely last for at least two weeks if urgent control operations were not intensified and fighting continued. “Combating teams could not cross into some areas in Marib due to fighting.”

The widespread locust invasion comes as the World Food Programme (WFP) on July 10 sent an appeal for urgent funds for its programs in Yemen, warning that people would face starvation otherwise.

“There are 10 million people who are facing (an) acute food shortage, and we are ringing the alarm bell for these people, because their situation is deteriorating because of escalation and because of the lockdowns, the constraints and the social-economic impact of the coronavirus,” WFP spokeswoman Elisabeth Byrs told reporters in Geneva.