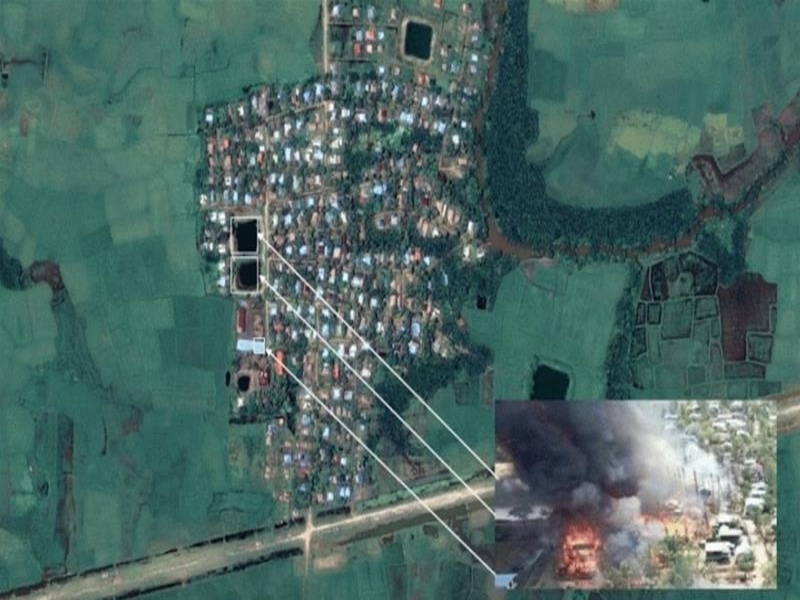 Satellite imagery shows that about 200 homes and other buildings were destroyed by fire in recent weeks in an ethnic Rakhine village in Myanmar’s western Rakhine state, Human Rights Watch (HRW) said – the latest in a series of brutalities allegedly committed by soldiers against civilians of different ethnic backgrounds.

“The burning of Let Kar village has all the hallmarks of Myanmar military arson on Rohingya villages in recent years,” Phil Robertson, deputy Asia director at HRW said in a statement on Tuesday.

“A credible and impartial investigation is urgently needed to find out what happened, punish those responsible, and provide compensation to villagers harmed.”

Earlier this month, Myanmar’s military was also forced to acknowledge that its troops abused ethnic Rakhine prisoners, after a video of soldiers battering blindfolded detainees spread on social media.

Myanmar‘s armed forces have been battling the Arakan Army (AA), a rebel group seeking greater autonomy for the western region, for more than a year. Clashes in Rakhine and neighbouring Chin states have escalated in recent weeks, leaving dozens dead and thousands displaced.

The imagery of Let Kar also bears a close resemblance to patterns of fires and widespread arson attacks by the Myanmar military on ethnic Rohingya villages in Rakhine State in 2012, 2016, and 2017, HRW said.

But at 2:12pm, an environmental satellite detected extensive fires burning there. The HRW damage analysis of 200 buildings burned is most likely an underestimate because internal damage to buildings was not visible, it added.

The satellite imagery is consistent with witness accounts regarding the date and time of the fires and the number of buildings affected.

An aid worker from the town of Mrauk-U told HRW that at about 2pm on May 16, columns of smoke could be seen coming from the direction of Let Kar, about 11km north of the town.

A former Let Kar resident, who inspected the damage on May 17, counted at least 194 buildings that had been burned down, including his own home, and a school.

A Rakhine State regional member of parliament, Tun Thar Sein, confirmed that a military contingent had been in the area.

“We will urge the union government for compensation and aid to be provided to the residents of Let Kar,” he said.

On May 17, Myanmar’s military said in a statement that its troops had entered Let Kar the previous afternoon while patrolling the area and were attacked by the Arakan Army.

It also issued an aerial image of burning buildings in Let Kar, presumably taken by a drone. The military accused the Arakan Army of setting the fires and damaging at least 20 houses before retreating into the mountains.

On May 19, the Arakan Army issued a statement denying the allegations. A spokesperson, Khine Thuka, urged the media to investigate.

The military has declared the armed rebel group a “terrorist” organisation, meaning anyone who contacts them for comment could be charged under Myanmar’s terrorism laws.

Under the laws of war applicable to the armed conflict between the two forces, attacks on civilians and civilian objects, such as homes, are prohibited, and the destruction of civilian property is considered a war crime.

News of the alleged attack by Myanmar’s military comes as the rights group, Burmese Rohingya Organisation UK (BROUK) said in a report on Sunday that abuses were also continuing against the mainly Muslim Rohingya. While hundreds of thousands fled after a brutal military crackdown in 2017, which is now the subject of an ICJ case, about 600,000 remained in Rakhine.

Tun Khin, president of BROUK, said: “The genocide against the Rohingya is continuing unabated in Myanmar.”

“The government and military have taken no meaningful steps whatsoever to improve the situation in Rakhine State, where women, men and children continue to suffer a hellish existence.”

BROUK’s briefing detailed how the Rohingya in Rakhine continue to face severe oppression by both the civilian government and the military.

“Myanmar has tried to destroy our people for decades, and it is obvious that this government has no intentions of genuinely implementing the ICJ’s provisional measures,” said Tun Khin.

Myanmar faces charges of genocide at the UN’s top court.

The country denies the charges.