Indian artists turn scrap into the seven wonders of the world 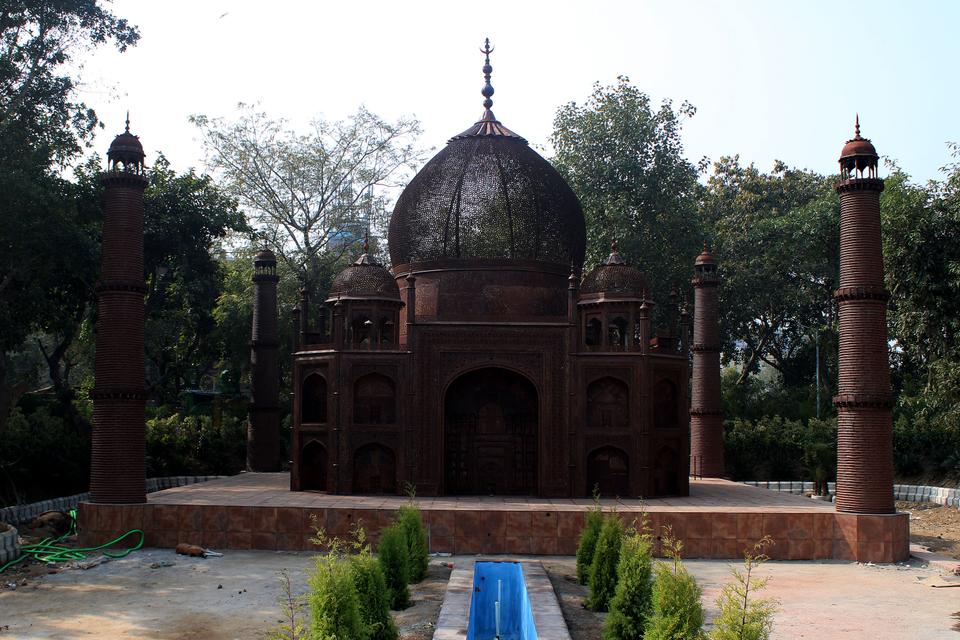 Tucked away from the usual bustle of India’s capital city New Delhi, local artisans in the Sarai Kale Khan neighbourhood have collected heaps of rubbish and scrap metal and built replicas of the seven wonders of the world.

On a two-hectare piece of land, which used to be a dump site, is now a centre of great craftsmanship, with a Taj Mahal model here and an Eiffel Tower there.

The project is a part of the South Delhi Municipal Corporation’s (SDMC) waste-to-art initiative, in which artists have used everything from bicycle rims to pipes, iron rebars to spare car parts to build the imitation historic monuments.

“Take the example of Taj Mahal, 1,600 cycle rims were cut into pieces to make its minars. The domes were made entirely from pipes,” said Nitin Mehta, owner of the art gallery YaWeDo Art Private Limited and the person responsible for executing the project, along with a team of 10 artists from across the country.

“We didn’t have much choice from which to choose the material. We were taken to the scrapyards and shown scrap. We didn’t buy anything new but made the monuments from what was available.”

Initially, according to Mehta, the team faced a lot of difficulties but once they started the project everything went smoothly.

“We didn’t know that this place was a landfill site, we thought it was a garden. When the foundation work started we realised that there was water everywhere, leakages from pipes that we had to fix first.”

A team of 60 people – artisans, welders, helpers, grinders and painters – worked together to complete the project within six months.

The artists have also built the Statue of Liberty, the Leaning Tower of Pisa, Christ the Redeemer’s statue in Brazil, the Great Pyramid of Giza, and Rome’s famous Colosseum – all made from discarded material.

From the 150 tonnes of collected material, only 90 to 100 tonnes went into the making of the monuments.

Before being brought to the park and used, the iron was first sandblasted to clean it.

Then the material was carefully cut and coated with primer before it was used in the structures.

The height of the replicas is between 25 and 30 feet, except for the Eiffel Tower, which soars 70-feet into the air.

Though the models have been coated with all weather polyurethane coating, they have been left raw for people to come and look at them and understand what has gone into the making of the replicas.

“It’s very easy for us to paint this Taj Mahal white and make it look like the real one. But we have left it raw to send a message to people that no waste is waste. These sculptures are made from waste and that waste looks very beautiful now,” Mehta told TRT World.

Zakir Khan, 31, a scrap artist who was involved in the project and worked on the Statue of Liberty, says that his main aim was recycling the waste material.

“This work gives me satisfaction. We have so much of waste material available in our city and if we don’t start thinking about recycling it, that time isn’t too far when it will become a problem for all of us,” he said.

“I want to give a message to people with my artwork that waste can be recycled and turned into something beautiful like these seven wonders.”

The park and the monuments will be lit up solely through renewable energy – using wind and solar power – and the site will be Delhi’s latest tourist attraction. Barely 100 metres from Hazrat Nizamuddin Metro Station, the park is expected to attract thousands of visitors not only from India but across the world.

A small entry fee will be charged from visitors and the collection used for the regular upkeep of the site.

Dr Srikant, 62, a visitor said: “It’s a good concept. Creating such amazing art pieces from scrap is amazing. We may not be able to go and see the real monuments but at least we can have the feel of them here now.”

Mohammad Aslam, 43, has recently joined a group of workers to plant grass in the park. He has never heard of the monuments made in the park except for the Taj Mahal.

“These monuments look amazing,” he said. “Someday I will bring my family here and show them these wonders of the world.”

Officials of the South Delhi Municipal Corporation are hopeful that people will come and appreciate the efforts of the Delhi government.

“We have tried to put the best use of the scrap. This is for the first time that the Seven Wonders of the World have been made from scrap. People from across the world should come and recognise our work,” Dr Alok Singh, Director of Horticulture at SDMC, told TRT World.

Dr Alok added: “We are planning for one more such park in South Delhi and probably that will come up in next six to seven months.”