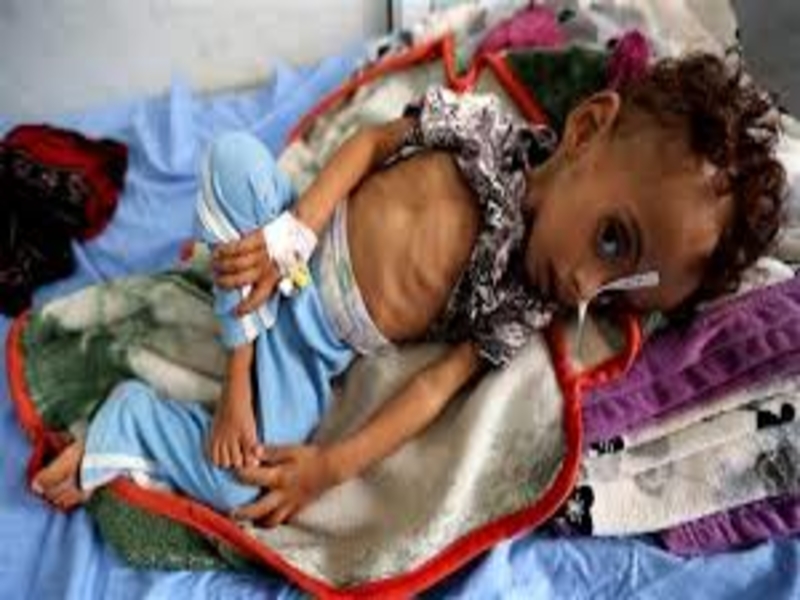 An estimated 85,000 children under the age of five may have died from acute malnutrition in three years of war in Yemen, a leading charity says.

The number is equivalent to the entire under-five population in the UK’s second largest city of Birmingham, Save the Children adds.

It is trying to revive talks to end a three-year war which has caused the world’s worst humanitarian crisis.
Yemen has been devastated by the conflict. Fighting escalated in 2015 when a Saudi-led coalition launched an air campaign against the Houthi rebel movement which had forced President Abdrabbuh Mansour Hadi to flee abroad.

At least 6,800 civilians have been killed and 10,700 injured in the war, according to the UN. The fighting and a partial blockade by the coalition have also left 22 million people in need of humanitarian aid, created the world’s largest food security emergency, and led to a cholera outbreak that has affected 1.2 million people.

It is difficult to get an exact number of deaths. Aid workers in Yemen say many go unreported because only half of the country’s health facilities are functioning and many people are too poor to access the ones that remain open.

Save the Children says it based its figures on mortality rates for untreated cases of Severe Acute Malnutrition in children under five from data compiled by the UN. According to conservative estimates, it calculated that around 84,700 children may have died between April 2015 and October 2018.

Rising food prices and the falling value of the country’s currency as a result of a civil war are putting more families at risk of food insecurity.

The UK-based charity blames the blockade for putting more people at risk of famine, with continued heavy fighting around the principal lifeline port of Hudaydah further exacerbating the situation.

The rebel-held port, through which the country has traditionally imported 90% of its food, has seen commercial imports fall by more than 55,000 metric tonnes a month, the charity says. This is enough to meet the needs of 4.4m people, including 2.2m children, it adds.

The charity says that based on historical studies, if acute malnutrition is left untreated, around 20-30% of children will die each year.

“For every child killed by bombs and bullets, dozens are starving to death and it’s entirely preventable,” its Yemen director, Tamer Kirolos, says.

“Children who die in this way suffer immensely as their vital organ functions slow down and eventually stop. Their immune systems are so weak they are more prone to infections with some too frail to even cry.

“Parents have to witness their children wasting away, unable to do anything about it.”

He further warned that an estimated 150,000 children’s lives were endangered in Hudaydah with “a dramatic increase” in air strikes over the city in recent weeks.

THREAT OF FAMINE
Just last month, the UN warned that half the population of the war-torn country was facing “pre-famine conditions”.

A country has to meet the following criteria to be declared in famine:
 At least one in five households faces an extreme lack of food
 More than 30% of children under five are suffering from acute malnutrition
 At least two people out of every 10,000 are dying every day

The UN said – based on assessments from a year ago – the first two thresholds had either been exceeded or was dangerously close in 107 of Yemen’s 333 districts. But the third threshold about numbers of deaths was more difficult to confirm. The organisation is currently repeating the assessments.