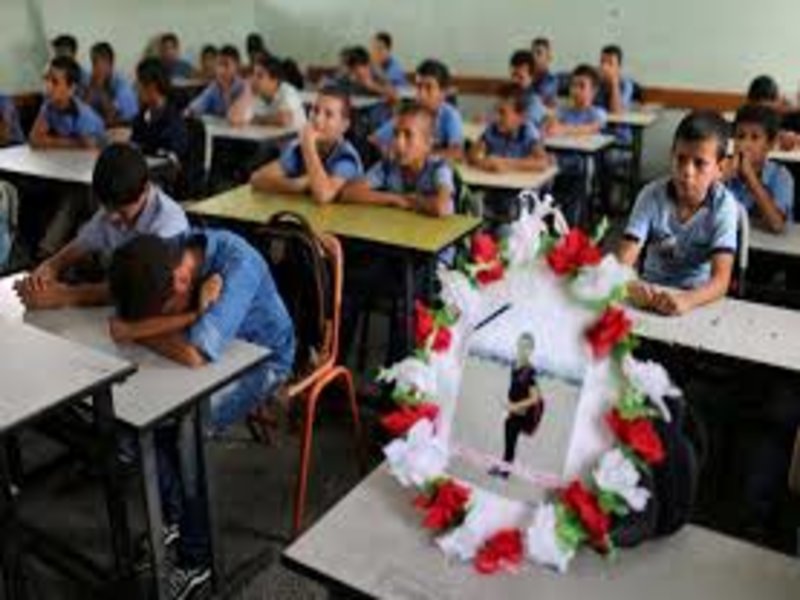 The school friends of Nassir al-Mosabeh sat tearfully in their classroom in Khan Younis on Sunday and mourned their 12-year-old friend who was killed in a protest on the Gaza-Israel border.

Gaza health officials said Israeli soldiers on Friday shot dead seven Palestinians, who were among thousands who thronged to the fortified border as part of weekly protests launched six months ago. Mosabeh was one of those killed.

“I cried for him like I have never cried before. I do not know what the (Israeli) occupation saw in him to kill him? What did he do to them? Did he kill anybody? I do not know what happened,” Mosabeh’s friend, Dia’ Abu Khater said.

Mosabeh’s classmates in the school in the southern Gaza Strip decorated his chair with his picture ringed by red and white flowers and green leaves, the Palestinian colors.

Mosabeh was always at the border to assist medics in the Friday protests, his sister, Eslam, said.

“Nassir always came with us. Everyone in the field hospital knows him and he always helped us. Nassir was our right hand; he would always bring us equipment whenever we needed something. May God bless his soul,” she said.
Israel said it held Hamas, which controls the Gaza Strip, responsible for the violence.

“Hamas continues to orchestrate belligerent activity throughout the Gaza Strip, cynically using Gazan civilians and endangering children by sending them to the security fence as a cover for terror activity,” the Israeli military said in a statement that summarized Friday’s events.

“Hamas is responsible for the violent riots and their consequences,” the statement added.

Israel said troops resorted to live fire and an air strike after explosive devices and rocks were thrown at them and to prevent breaches of the border fence. It posted a video clip showing a controlled detonation of many explosive devices.

Gaza health officials said 505 people were wounded on Friday, 89 of them by gunshots.

At least 191 Palestinians have been killed since the Gaza protests began on March 30. The protesters are demanding the right of return to lands that Palestinian families fled or were driven from on Israel’s founding in 1948, and the easing of an Israeli-Egyptian economic blockade.

Two million Palestinians live in the Gaza Strip, which has been controlled by Hamas for more than a decade.
Israel and Egypt say the blockade is necessary for security reasons. The World Bank says it has reduced the territory’s economy to a state of collapse, with residents suffering a lack of clean water, electricity and health care.