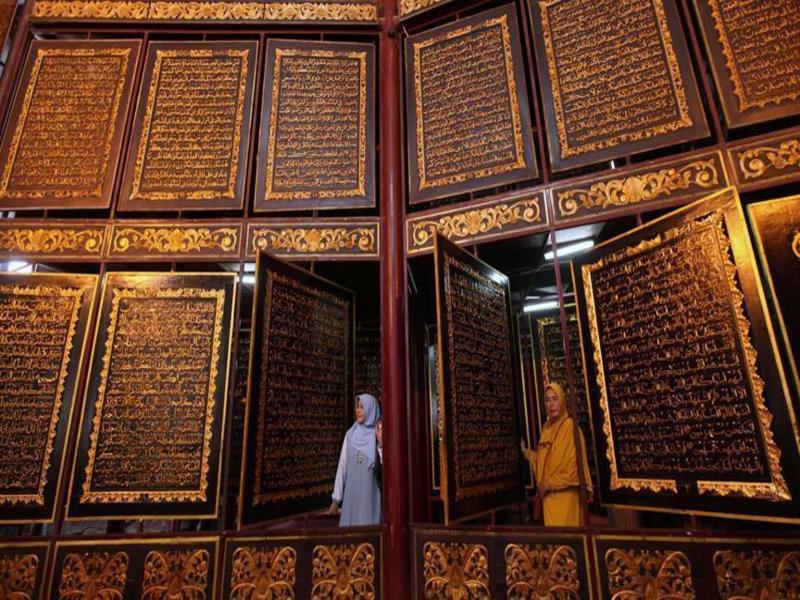 The world has many giant Qurans, but its only giant wooden Quraan can be found in Palembang, the capital of Indonesia’s South Sumatra province.

Its creator, Shofwatillah Mohzaib, 43, said that he finished the production in the form of 30 Quranic juz – traditional divisions of the holy book – over the course of nine years. He said it took so long due to shortages of both wood and money.

Shofwatillah said the idea of making a giant Quraan came in the year 2000, from a dream he had when studying calligraphy at the Great Mosque of Palembang.

A year later, he started to make its first page, containing the Surah Al-Fatihah.

Before carving them into wood, Shofwatillah wrote the verses out on cardboard. After that, he sought approval from Muslim experts, then made copies of the verses with tracing paper.

“It took a month to do one page of the Quraan. The carving process took the longest,” he explained.

He picked tembesu wood for the material as it is strong, durable, and quite popular in southern Sumatra as raw material for carving or furniture.

A five-story structure housing the massive Quran can be found at Palembang’s Al Ihsaniyah Gandus boarding school, also the home of a museum showcasing Shofwatillah’s work of faith.

In 2011, then-Indonesian President Susilo Bambang Yudhoyono, accompanied by a delegation of the Parliamentary Union of the Organization of Islamic Cooperation (PUOIC) member states, inaugurated the giant wooden Quran along with the Al Quran Al Akbar Museum.

According to Shofwatillah, since 2012 a million visitors have visited the museum.

It attracts both domestic visitors and tourists from countries such as Turkey, Saudi Arabia, Iraq, Malaysia, Singapore, the U.S., and Canada.

Shofwatillah also said he wants to build a movie theater to educate visitors about the miracles of the Quran.

Visitor Sarmin Gumay, 76, said he was amazed by the beauty of Al Quran Al Akbar, adding that he had visited the museum several times.

“It is absolutely wonderful,” she said.

Amira told Anadolu Agency that there is little religious tourism in Palembang, but she hopes the government will give it more support.

“I hope people can understand the holy Quraan more,” she added.

The museum has had a huge impact on local residents, as the area is now crowded with merchants. Not only tourists, but also sellers of clothes, food, and drink flock to areas around the museum.