Human Rights Watch: Rohingya must be moved to safer areas in Cox’s Bazar 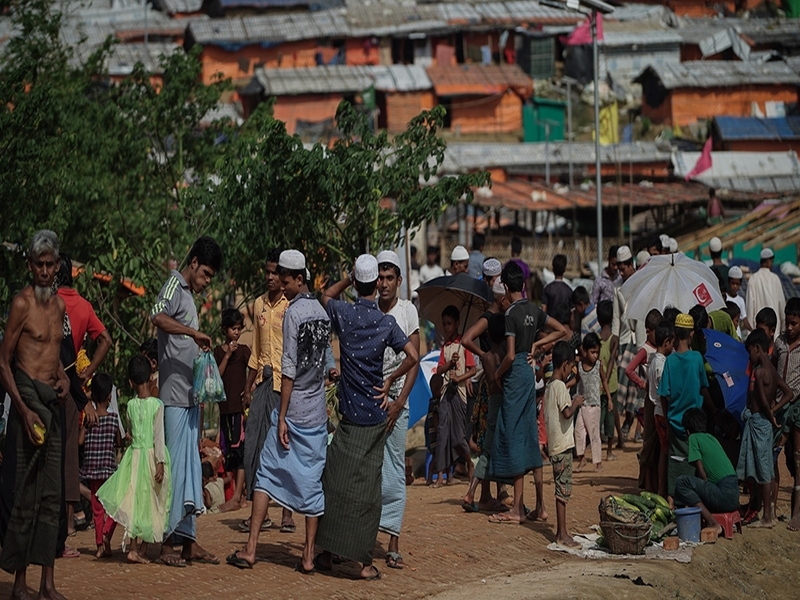 Rohingya refugees living in a severely overcrowded mega camp should be relocated by the Bangladeshi government to safer areas, Human Rights Watch (HRW) said on Monday.

A 68-page report by the New York-based group highlighted the dangers the Rohingya face from flooding and landslides during the monsoon season as they wait to return to their homeland in Myanmar, as well as the heightened risks of communicable diseases, fires, community tensions, and domestic and sexual violence to which the densely packed refugees are subjected.

These refugees “should have sturdier shelters and adequate education for their extended stay”, said the report titled, Bangladesh Is Not My Country: The Plight of Rohingya Refugees from Myanmar.

It called on Bangladeshi authorities to transfer the Rohingya to smaller, less-congested camps on flatter, proximate land in the same Ukhiya sub-district where the mega camp is located.

Since August last year, more than 700,000 Rohingya have fled across the border from Rakhine State in Myanmar, after the army waged a brutal crackdown against the Muslim minority.

An estimated 626,000 Rohingya – from last year’s and past displacements – are now living in the Kutapalong-Balukhali camp, making it the largest refugee camp in the world.

It is severely overcrowded, the report said, with the average usable space at 10.7sq metres a person, far below the recommended international standard of 45sq metres for each individual.

The UN’s refugee agency estimates 200,000 Rohingya are at risk of floods and landslides.

“But we also don’t have much mainland,” he said. “We are a population of 160 million and suffer from land scarcity. So, settling the refugees in the first place is really remarkable.”

The Bangladesh government said it would soon start relocating 100,000 Rohingya to Bhasan Char, an uninhabited mangrove-and-grass island. However, HRW said it was not fit for accommodation because of its vulnerability to high waves and tides, and in the event of a cyclone, it would be completely submerged under water.

“We are very concerned for the plan of relocating Rohingya refugees to Bhasan Char,” Nay San Lwin, a coordinator of Free Rohingya Coalition based in London, told Al Jazeera.

“The refugees in the camps are also not willing to move to Bhasan Char. They would be more comfortable if they were relocated within Ukhiya with easy access to aid agencies.”

According to HRW’s report, there are six practical relocation sites in Ukhiya – in an eight-kilometre stretch west of the Kutupalong-Balukhali camp – that could accommodate 263,000 people.

Yet Abul Kalam said the government is “serious” about relocating refugees to Bhasan Char as “they have invested a lot of money in this”.

Refugee status and return
In addition to relocation, the report said the Rohingya, particularly the recent arrivals over the past year, have a right to a dignified life.

“Granting them refugee status will help a lot in improving the conditions of the camps and lives of refugees,” he said.
Tarek Mahmud, a local journalist who spent more than 100 days at Cox’s Bazar covering the refugee crisis, said authorities need to better organise healthcare and proper education for Rohingya children.

“But in the case of pursuing work outside the camps, that carries the risk of tensions spilling into conflicts between the locals and Rohingya,” he told Al Jazeera.

Instead, Mahmud said it would be better to organise skills training and work opportunities in the camps, which would “benefit the Rohingya when they go back to their villages in Rakhine”.

While Frelick recognised Bangladesh’s “rightfully garnered international praise” for shouldering the burden of the Rohingya plight, ultimately it is Myanmar that is responsible for the crisis, he said.

Frelick called on international organisations and governments to apply persistent pressure on Myanmar in order to meet the required conditions for safe, dignified, and sustainable returns of the Rohingya refugees.

“Myanmar’s failure to take any meaningful actions to address recent atrocities against the Rohingya, or the decades-long discrimination and repression against the population, is at the root of delays in refugees being able to go home,” he said.