Stranded rescue ship with over 200 on board docks in Malta 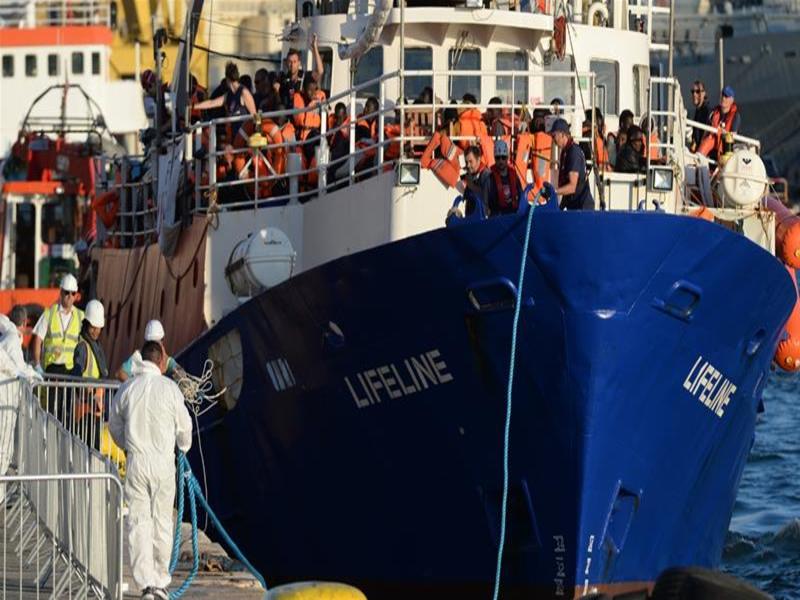 More than 200 refugees and migrants have reached land in Malta, after nearly a week being stuck at sea while European Union (EU) leaders argued about their fate.

The humanitarian ship, Lifeline, docked in the capital Valletta on Wednesday, but only after eight countries agreed to take a share of the refugees and migrants on board.

Once the ship reached land, however, it was ordered impounded, and the captain of the German ship, Claus-Peter Reisch, was placed under investigation for allegedly breaching maritime regulations.

The Maltese government said Lifeline is not registered as a search and rescue ship, has failed to obey the orders of the Italy’s coastguard, and often switched off its transponder to disguise its position, raising suspicion that the ship could be deliberately helping smugglers.

French President Emmanuel Macron also criticised the ship’s captain, saying he “acted against all the rules,” by not turning the refugees and migrants over to Libyan authorities after they were found floating in rubber dinghies in Libyan waters.

The head of mission said Italian authorities opened the investigation against it, and suspects political motives under the new anti-migration government in Rome, because the Lifeline operated without problems last year.

“We started last year in September and we started here in Malta, too. We had five missions with this boat last year and rescued 549 people,” Axel Steier, head of Lifeline mission told reporters in Valletta.

Humanitarian groups have pushed back, with Doctors without Borders, known by its French initials MSF, Amnesty International and two other groups asking to meet Macron over his assertion.

“Engineered panic and fear-mongering by European politicians over migrations is steering the EU towards very dangerous waters,” Human Rights Watch said in a statement.

On the Lifeline’s approach to Malta, the refugees and migrants crowded the deck wearing orange life vests, many waving, as it entered the main port under escort by a Maltese patrol boat.

The captain sounded the ship’s horn with two long blasts to salute the weary passengers after their shared journey, and raised a yellow flag to signal permission to authorities to board and a Maltese flag as a courtesy for allowing the ship to dock.

One by one, the refugees and migrants were escorted off by officials and medical personnel in white coveralls and gloves.

A girl in pink shorts – one of five children on the ship – was cradled by an official.

One man walked unsteadily, leaning on a helper, while another wearing shorts and a white polo shirt was barefoot and wrapped in a red blanket.

Reisch, the ship’s captain was the last to get off the ship, and he hugged the crew before getting into a waiting police car for questioning.

The refugees and migrants the ship carried will now have their asylum interviews in the EU.

But authorities say this is an individual arrangement, and there is no guarantee of safe harbour for future shiploads, Al Jazeera’s John Psaropoulos, reporting from Valletta, said.

‘Politicising refugee crisis’
Italy’s refusal to accept search and rescue ships has opened a new rift in the European Union.

Its 27 leaders are broadly divided between two camps – those who believe in collective action; and a growing opposition that says the EU needs to push its defence outward, setting up offshore processing camps in Africa and the Middle East, allowing no one to cross these waters.

“What I think it is is a situation where there were member states who showed that for them the values of European solidarity are not just found in the European treaties, but that we act together,” Joseph Muscat said.

“I don’t think it’s all about grandstanding and high-flying political declarations. It’s about how we act operationally, how we manage the situation.”

The standoff comes in advance of a two-day EU summit that begins Thursday, where Italy will propose a new system for distributing refugees and migrants more evenly among EU countries, along with ways to discourage people from leaving Africa.

Italy’s Interior Minister Matteo Salvini, who visited Libya earlier this week, warned on Wednesday that there are 662,000 refugees and migrants from 40 countries in the northern African nation waiting to make their way to safer countries, mostly in Europe. He cited data from the International Organization for Migration.