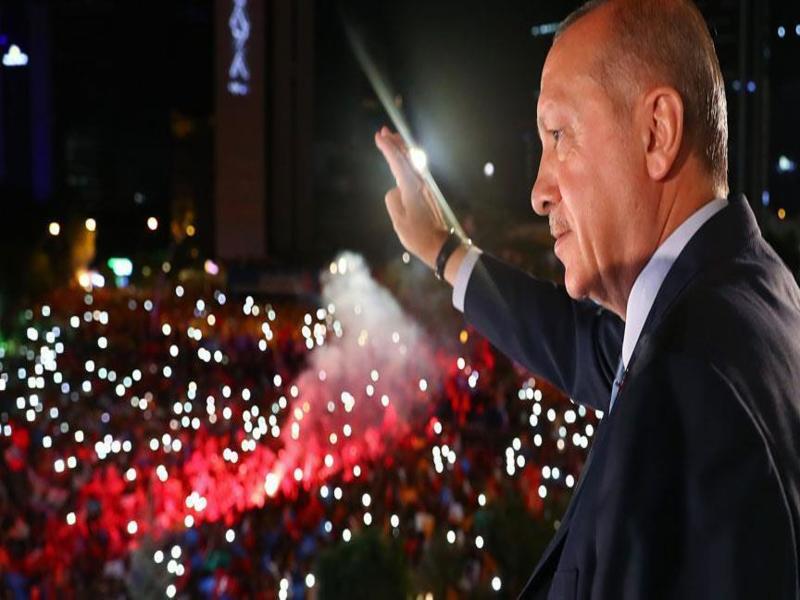 Addressing the nation from the balcony of Justice and Development (AK) Party headquarters in capital Ankara after his election victory, Erdogan said every one of the 81 million Turkish citizens is a winner.

“Winners of June 24 elections are Turkey, Turkish nation, sufferers of our region and all oppressed in the world,” he said.

“I would like to express my gratitude to my people, my brothers and sisters who put their trust in me, my alliance and my party,” he said.

Erdogan pointed out the benefits of forming alliances in the elections. “As you see, this [alliance] has become beneficial both for other [political] parties and our country.”

AK Party is also leading in parliamentary elections. Along with the MHP, the AK Party’s election ally, the People’s Alliance has won majority of the votes so far.

The president said he received the citizens’ message in the polls. “In this term, we will be before our nation and make up for our shortcomings.

“Starting from tomorrow, we will be in a rush trying to deliver on promises that we have made to our nation.”

He also said his government would confront terror groups more decisively. “We will increase our country’s international reputation,” he added.

“Immediately after the oath-taking ceremony, we will start implementing our program by identifying our bureaucrats,” Erdogan said, vowing to work day and night as “we have no single moment to lose.”

“Turkey has decided to take the side of growth, development, investment, enrichment and a reputable, honorable and influential country in all areas in the world,” Erdogan said.