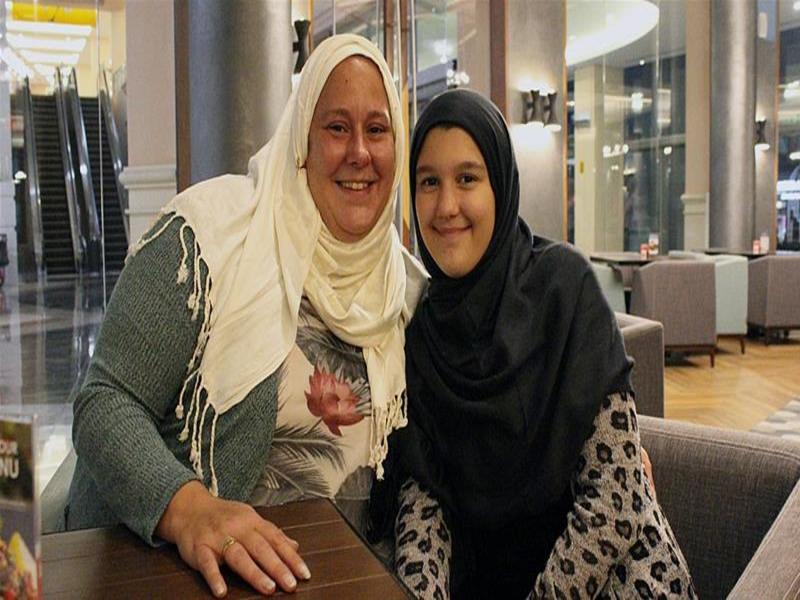 Grace Lloyd got a round of applause when she walked into her classroom at Doha’s Gulf English School on the first day of Ramadan, wearing a black hijab with her blue uniform.

The shy 11-year-old flushed as her fellow grade seven classmates in the Qatari capital clapped and cheered for her earlier this month.

Lloyd, a British Christian, will be covering her head for the entire duration of the holy month this year in solidarity with Muslim women who face discrimination for wearing the hijab.

“I feel very strongly about this,” said Lloyd, the youngest participant of the 30-day Ramadan hijab challenge, a yearly initiative by the non-profit World Hijab Day (WHD) organisation, inviting women of all faiths to wear the headscarf for a month.

“I usually wear the black one, I feel more comfortable with it because all the people in my class wear it too,” she told Al Jazeera, adding she might try a different colour later in the month.

The hijab is a headscarf worn by Muslim women who feel it is part of their religion.

For the organisers, the purpose of the month-long activity is to build bridges and break stereotypes.

“This event is for those who want to experience the hijab for more than just one day in order to better understand what Muslim women go through on a daily basis,” said Nazma Khan, the president and founder of the World Hijab Day organisation.

Each year on February 1, Khan’s non-profit also invites women to cover their heads for a day to mark World Hijab Day.

“In the most basic terms, the hijab is a piece of fabric, but for a Muslim woman who puts it on, it has the deepest of spiritual meaning,” she added.

Fasting experience
Muslims in the United States, Europe and Turkey began fasting on May 16 this year, with some countries in the Gulf and Middle East region welcoming the holy month on May 17.

As one of the five pillars of Islam, fasting is obligatory during Ramadan. Observers abstain from eating, drinking, smoking and having sex from dawn to sunset.

Khan told Al Jazeera that non-Muslims wearing the hijab has a greater social impact than fasting as part of the Ramadan challenge.

“Fasting is, for the most part, not visible to the public, thus, wearing a hijab promotes the faith publicly in a way fasting does not,” she said.

However, as a Mormon Christian, besides wearing the hijab for 30 days, Kayla Hajji said she is also fasting this year.

“There is such beauty in coming together as a community of believers to fast that is indescribable unless you participate,” the 35-year-old American from Fresno, California, said.

She wanted to take the hijab challenge to get a small glimpse into what her “sisters in faith deal with” to “better understand their struggles or triumphs”.

Ellie Lloyd, who is also considering fasting this month, says she and her daughter Grace have had to “completely change their wardrobes” for less revealing clothes to complement the headscarf.

“It’s not just about the actual scarf, it’s how you dress as well,” the 38-year-old told Al Jazeera.

“There’s no point in wearing the hijab and then wearing skinny jeans and a crop top because it’s about the whole thing,” Lloyd explained. “So it’s respectful in my entire dress, not just covering my hair.”

The leaflet, received by several Britons through the post, said there would be rewards for pulling the headscarf off Muslim women, verbally abusing Muslims, and throwing acid in their faces.

After President Donald Trump’s election and “Muslim ban”, CAIR reported a 17 percent increase in anti-Muslim incidents in the US last year, compared with 2016.

“A headscarf on a woman was the trigger in 13 percent of the incidents,” the group said in its latest civil rights report published last month.

Additionally, there was anger among Muslim women in Europe last year when the European Court of Justice ruled that employers are entitled to ban staff from wearing visible religious symbols.

Brazilian student Pamela Zafred, who is wearing the hijab as a social experiment this month, said the experience has been an “eye-opener” for her.

The 19-year-old from Goiania, who was raised as a Catholic but does not follow any religion, told Al Jazeera the first day of the 30-day challenge was the “worst”.

“I went to the gym [wearing the hijab], and I could hear incessant jokes about me,” she said. “Our classes were conducted in groups, but no one chose to stay with me until the instructor divided the groups himself.”

“I could imagine this happening with women who wear the hijab and how they would feel rejected, affecting their sense of belonging.”

The challenge has also received some negative reaction on social media, with words like “oppression” and “bondage” being used.

Habit of hijab
Many Muslim women are using the month-long challenge to make the hijab a part of their lives even after Ramadan.
Rawzatul Zannat wore the hijab for nine months last year before she stopped.

The Bangladeshi Muslim was often asked questions by her classmates about her headscarf, called “boring” and “too lazy” to do her hair.

“Ramadan is a time when almost all the Muslims try to be their best, so I chose this month to continue my hijab forever, and my message will be if you try something for a month you can continue doing it always,” the 19-year-old student told Al Jazeera.

Bilkis Salifu from Ghana, born and raised a Muslim, is in a similar situation.

“I do wear hijab but only sometimes,” the 33-year-old said. “I’m using Ramadan, which is a holy month, to see if I can get used to making it a part of me.”

WHD’s Khan is hoping the month-long activity encourages other Muslim women, like Zannat and Salifu, to wear the hijab without fear and make them comfortable with the head covering.

“This event is meant to provide global support to Muslim women who want to wear the hijab, but don’t have the courage to take the first step.”