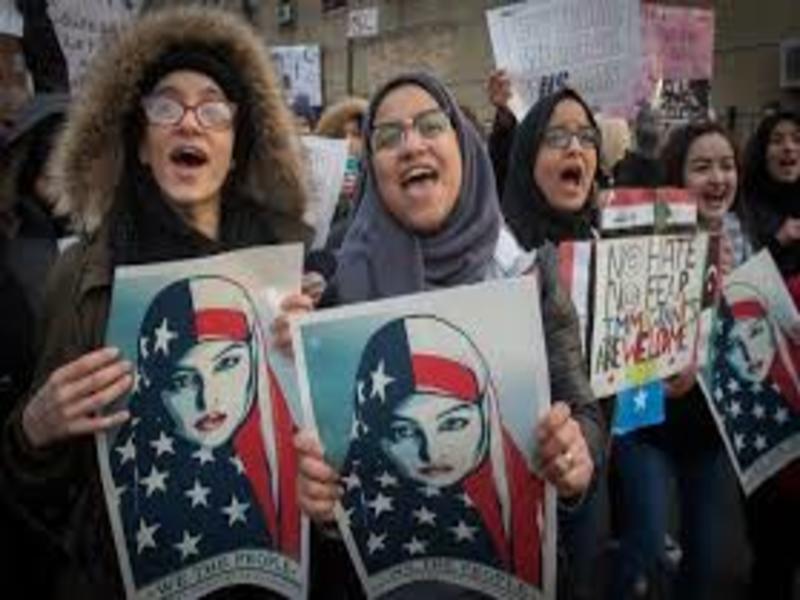 Last week someone sent me a cell-phone video of a middle-aged man verbally abusing and belittling a niqab-wearing, Muslim woman at a Coffee Bean café in Riverside, California on 9 May.

I posted the video on Twitter, and it has since been viewed nearly 3 million times, no doubt a reflection of the young woman’s bravery, and the moral fortitude of the café staff for refusing to serve her assailant because of his “racist” remarks.

If you haven’t already seen the clip, an unidentified man approaches Amina Deady, a 27-year-old single mother and recent convert to Islam, and asks, “Is this Halloween or something?”

Aware he is mocking her conservative Islamic dress, Deady fired back, “What’s wrong with me?”

The two engage in a back-and-forth, in which Deady tries to inform the instigator that there are equally controversial passages in the Bible as there are in the Quran, but he says he doesn’t wish to have a conversation on religion, only that he hates Islam.

When he tries to place his order at the serving counter, the supervisor on duty tells him his business is no longer wanted, saying he is “disrupting a public place and being very racist”.

In a public statement, The Coffee Bean & Tea Leaf said it is “fully committed to ensuring the wellness and safety of its customers, team members and business. We have a zero-tolerance policy when it comes to discrimination of any kind, and have the right to refuse service to any person who makes customers or team members feel endangered in any way”.

When I interviewed Deady, she told me that picking up coffee from that particular Coffee Bean outlet was part of her Wednesday ritual, and that she used it as a venue to accomplish a “little bit of studying” while enjoying her drink.

“I stood in line behind this gentleman, just waiting my turn like everybody else, and he made a comment,” said Deady, adding that she’s used to hearing negative comments from strangers because of her conservative dress.

“So I didn’t think anything of it. I didn’t want to assume his comment was about me, but then he walked around the glass counter that holds the pastries, and then he said the ‘Halloween’ comment and he said it very aggressively, giving me a sly look, and then I thought, ‘Ok, confirmation.’ So I turned on my phone and asked him to repeat his comment and that’s where everything took off.”

Deady said that while “people do make comments” about her from time to time, his belittling of her was “shocking because it took place in my hometown. I was born and raised in Riverside and have deep connections to that area”, adding that her brother was stabbed to death three years ago within walking distance of this particular Coffee Bean café.

Despite the man’s aggressive behaviour towards her, Deady says she felt “embarrassed” for whom she presumes was his teenage daughter accompanying him.

“I felt so bad for her, and I still feel super bad for her, because now this 14-year-old or 15-year-old girl will be known as the daughter of this ‘Coffee Bean guy.’”

She told me she is glad this encounter happened, because it opened her eyes to how “positive” people can be, adding that the overwhelming support she received from strangers and the café staff far outweighed what she described as a “really negative one minute of my life”.

She also said that the staff’s response “lifted a huge weight off my chest immediately”.

“If you look at the video, you can see my eyes squint up into a smile under my niqab because it really is not often people stand up for me in that kind of situation,” said Deady.

When I asked Imraan Siddiqi, an executive director with the Council of Islamic American Relations and founder of Hate Hurts, an anti-Muslim discrimination advocacy group, what he thought of the clip, he said: “I think given the circumstances she did what she could do to stand up against her harasser. Most of us are unprepared on how to deal with instances of harassment or bullying – whether in public or in a work setting.”

Siddiqi also praised the café’s staff, adding that the encounter serves as a reminder of how important it is for large corporations to invest in “diversity training”.

“Many assailants think that no one will stand up for the harassed person – and are taken off guard when this actually happens,” he said.

A number of chains and retailers have come under fire for either failing to effectively deal with bigoted customers or participating in racially-charged behaviour.

Coffee Beans’ main rival, Starbucks, came under criticism recently after one its managers called the police on two African-American customers despite witnesses testifying that the men “didn’t do anything wrong”. In 2014, a black man was shot and killed after a Starbucks employee in Milwaukee called the police on him for sleeping on a park bench.