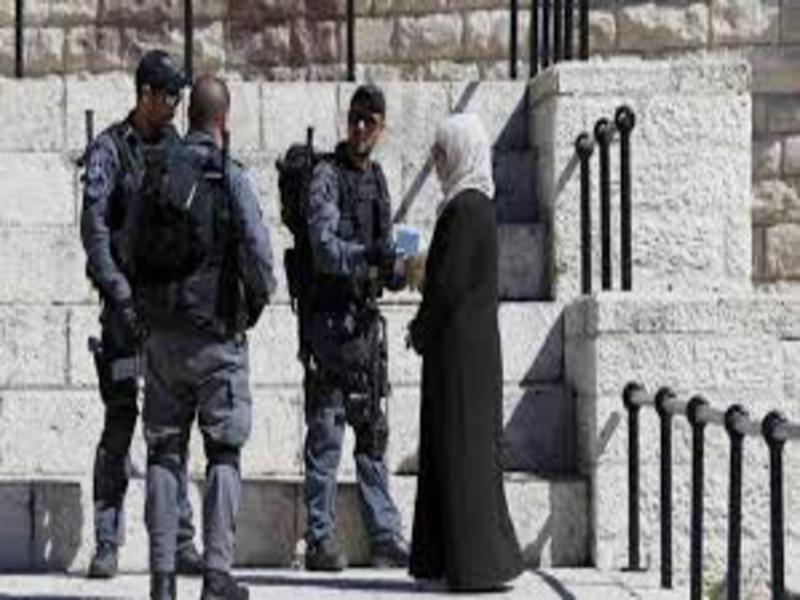 U.S. President Donald Trump’s recognition of Jerusalem as “the capital of Israel” will take form on Monday, when the U.S. Embassy is moved from Tel Aviv to Jerusalem with a ceremony.

Jerusalem, the heart of Palestine and the Palestinian cause, is bracing for one of the hardest days in its history.

Thus, Israel’s illegitimate and inhumane efforts to Judaize Jerusalem will move to a whole new level.

The Tel Aviv administration hopes to find an opportunity to gain “international legitimacy” in the occupied city following the embassy’s move. Trump will give a speech via teleconferencing on Monday, the 70th anniversary of the founding of Israel, which Palestinians call the “Nakba” (Catastrophe).

Most of Jerusalem’s streets are already covered with signs with such sayings as “Zionist Trump.” Signs marking the new U.S. Jerusalem Embassy were placed by Nir Barkat, the Israeli mayor of the city.

While Israelis enjoy Monday as if it were a festival, Palestinians will face it with great disappointment, which they will show through peaceful demonstrations.

Jerusalem, a sacred site for Muslims where the Prophet Muhammad’s night journey began, has been through turmoil since the end of Ottoman rule in 1917.

After the occupation of East Jerusalem in 1967, Israel has been working hard to Judaize the city. In addition to its meaning for Muslims, East Jerusalem is also home to sacred Christian and Jewish sites.

In 1980 Israel declared both East and West Jerusalem “Israel’s united capital”. The U.S. is the first country to recognize this, thanks to Trump.

In response to the U.S. move, the Organization of Islamic Cooperation (OIC) last December met in Istanbul and declared that “East Jerusalem is the capital of Palestine”.

According to the UN’s plan to distribute Palestinian lands between Arabs and Jews in 1947, Jerusalem was supposed to have a special status and be under international control.

Jerusalem’s special status recognized its significance as a holy city for all three Abrahamic religions.

Zionist forces, in the 1948 war, occupied West Jerusalem. After seizing East Jerusalem in 1967, which had been under Jordan’s control, Israel violated international law by announcing that Israeli law was in effect in the city. This is how Israel annexed East Jerusalem.

With a resolution passed by the Israeli parliament (Knesset) in 1980, Jerusalem — both West and East — were declared Israel’s “united capital”. This made the annexation of East Jerusalem official.

In response, the UN Security Council passed Resolution 478 invalidating Israel’s annexation of East Jerusalem and its capital claims. The international community, including the U.S., see East Jerusalem as being under occupation.

Under Trump’s decision, the U.S. Embassy in Tel Aviv will be moved to Jerusalem on Monday; all the other countries that recognize the Israeli state have their embassies in Tel Aviv. Israel’s illegal annexation of East

Jerusalem is in violation of the principle of international law that “an occupying force doesn’t have the right to rule over occupied lands”.

The U.S. has become the first country to recognize Jerusalem as the “capital of Israel”. Facing a backlash from the international community, the Trump administration ignored the warnings of further chaos in the region and escalation of the Israeli-Arab conflict.

Today, the number of Palestinians living in occupied East Jerusalem is less than 300,000. However, they face oppression such as arbitrary arrests and the destruction of their homes. Trump’s decision exacerbated anger and frustration in the city.

The good old days
Elderly Palestinians who recall the days before 1967, when Israel occupied East Jerusalem, say that they miss the old days.

“Gazans would bring strawberries and grapes from Khalil. Jerusalem was the meeting point for Palestinians.

Especially on Fridays at the Damascus Gate, you could see people coming from all corners of the country. Now, those who are left are hesitant to meet at the gate. The shops close even before it gets dark. Occupying soldiers are at every corner, ready to pull the trigger,” one elderly Palestinian told Anadolu Agency.

Stateless citizens
Even though Israel effectively annexed East Jerusalem, the Palestinians there are not seen as Israeli citizens and cannot exercise their civil rights. The slightly more than 300,000 Palestinians have permanent residence permits under “Jerusalem Identity Cards” given by Israeli authorities.

14,000 banished Palestinians
Over 300,000 Palestinians living in East Jerusalem fear being banished from the city at any moment, as Israeli authorities might take away their “Jerusalem Identity Cards” at any moment using any pretext.

In order for Palestinians to be able to live in East Jerusalem, they have to meet demands set by Israeli authorities.

Residence permits are taken away if they live in a foreign country or the West Bank for a period of time.

By not allowing people in East Jerusalem to build houses and forcing them to leave the city, Israel aims to drive Palestinians away from the ancient city and make sure they never return.

Should a family member get involved in an attack Israel views as “terrorist”, the entire family is banished from Jerusalem.

According to B’Tselem, an Israeli human rights group, Israel has cancelled 14,000 residence permits since 1967, banishing their permit holders from East Jerusalem.

200,000 Jewish settlers
In order to shift East Jerusalem’s demographic makeup in favour of Jews, the Israeli administration has built 10 Jewish settlements in violation of international law.

Over 200,000 people live in these illegal settlements, where non-Jews are not allowed to reside.

By adding additional settlements in the city, Israel tries to artificially boost the Jewish population.

Israel ignores UN resolutions
Under international law, the Jewish settlements of Israel built in East Jerusalem and the West Bank are illegal. But despite considerable international opposition, Israel continues to implement occupation and enlargement policies.

In a December 2016 resolution, the UN Security Council demanded that Israel stop its settlement activities “immediately and completely,” but Israel has ignored this.

Over 20,000 houses face the threat of being demolished for being “unlicensed”. Israeli authorities demolish these houses and even make Palestinians pay the cost.