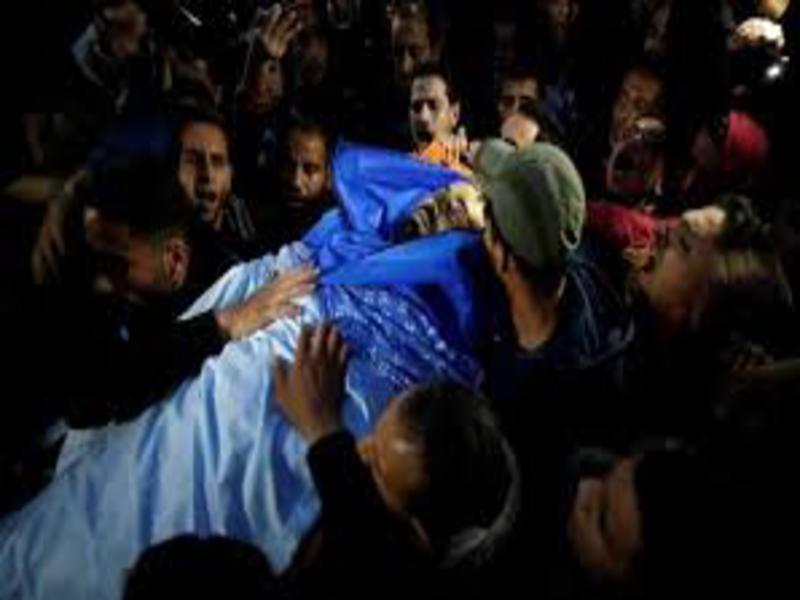 Ahmad Abu Hussein, a Palestinian journalist shot by Israeli forces while covering a mass demonstration along the Gaza border earlier this month, has died of his wounds, according to Palestinian officials.

The 24-year-old, who was shot in the abdomen during a protest near Jebaliya on April 13, is the second Palestinian journalist to have been killed by Israeli soldiers since a wave of demonstrations known as the “Great March of Return” began on March 30.

His body arrived later in the day at Al-Andalusi hospital in the Gaza Strip, according to Ashraf al-Qudra, a spokesperson for the health ministry.

Hussein was originally treated in Gaza, before being moved to a hospital in Ramallah on April 15 and then to Tel Hashomer four days later.

Vest marked with ‘PRESS’
According to eyewitnesses, Hussein, a photographer for the Gaza-based Voice of the People radio station, was wearing a protective vest marked “PRESS” at the time he was shot.

“Protective gear that clearly indicates individuals are members of the press should afford them extra protection – not make them targets,” said Sherif Mansour, Middle East and North Africa programme coordinator for the Committee to Protect Journalists.

“The death of Ahmed Abu Hussein underscores the need for Israeli authorities to urgently scrutinise its policies toward journalists covering protests and take immediate, effective action.”

Yaser Murtaja, a photographer with the Gaza-based Ain Media agency, died on April 7 as a result of wounds sustained when shot by Israeli forces the previous day.

Murtaja, 30, was hit in the stomach despite also wearing a blue flak jacket marked with the word “PRESS” while covering a protest in Khuza’a in the south of the Gaza Strip.

Around 70 percent of Gaza’s two million population were forced from their homes and now live in a territory of about 360sq km.

At least 40 Palestinians have been killed and more than 5,000 wounded since the demonstrations began, according to Palestinian officials.

Israel has drawn sharp criticism for its open-fire orders along the border.