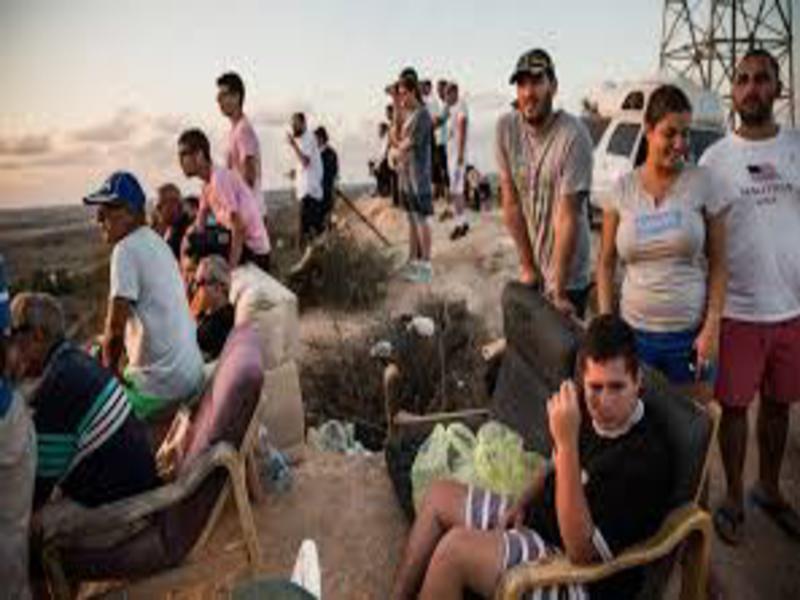 A photo of young Israelis sitting atop a watchtower at the Gaza border and cheering as Israeli forces fired at Palestinian protesters has generated outrage on social media this weekend.

Israeli Channel 2 journalist Nir Dvori posted the photo on Twitter on Friday showing seven Israelis waving as they sat on an observation tower in Nahal Oz, outside the fenced-off Gaza Strip watching Palestinians being attacked.

Dvori captioned the photo: “Best show in town. Residents of Nahal Oz in the stands.”

Critics of social media likened the set up to an “outdoor cinema”, with dozens condemning the scene as disgusting and barbaric.

“It is so, so dangerous for Israeli civilians outside the fenced-off Gaza strip [sic] that they came out to watch their military pick off protesters,” Executive Director of the US Campaign Youssef Munayyer tweeted, challenging the Israeli narrative that armed demonstrators were using the protests to attack soldiers.

Some 32 Palestinians have been killed over the past ten days in protests as part of the Great March of Return. Ten Gazans died over the weekend, with over 1,000 injured as Israeli forces fired live ammunition and tear gas at protesters. Quds Press also reports that the military has been using drones to drop “strange gases” on the demonstrations, causing protesters’ bodies to convulse, tremble and lose consciousness.

On Friday, Palestinian video journalist and photographer Yaser Murtaja, who had been contracted to work with MEMO, died after being shot in the abdomen by Israeli snipers while covering the march. Murtaja was shot despite clearly wearing a vest marked “PRESS”. Six other journalists were reportedly injured while covering the mass demonstration.

Yesterday, the Prosecutor of the International Criminal Court (ICC), Fatou Bensouda, issued a statement warning Israeli authorities over the use of lethal force against civilian protesters in Gaza.

Solidarity protests also took place in the Palestinian territories and elsewhere over the weekend. On Saturday, thousands rallied in London and in New York to show their support of Gazan protesters and condemn the brutal Israeli attack.

Jewish organisations were also present at the demonstration in London, calling for peace and solidarity with the Palestinians. They rejected that the Israeli government’s massacres in Gaza were in the name of the Jewish people and announced the launch of a campaign entitled “Not In My Name” to confirm their rejection of Israel’s use of force in dealing with peaceful demonstrators.

The protests in the besieged Gaza Strip, which started on Palestine Land Day, will culminate on 15 May, a day which marks the 70th anniversary of the Nakba and the establishment of Israel. Protesters are calling for the right of return for Palestinian refugees and their descendants, to what is now considered Israeli territory.