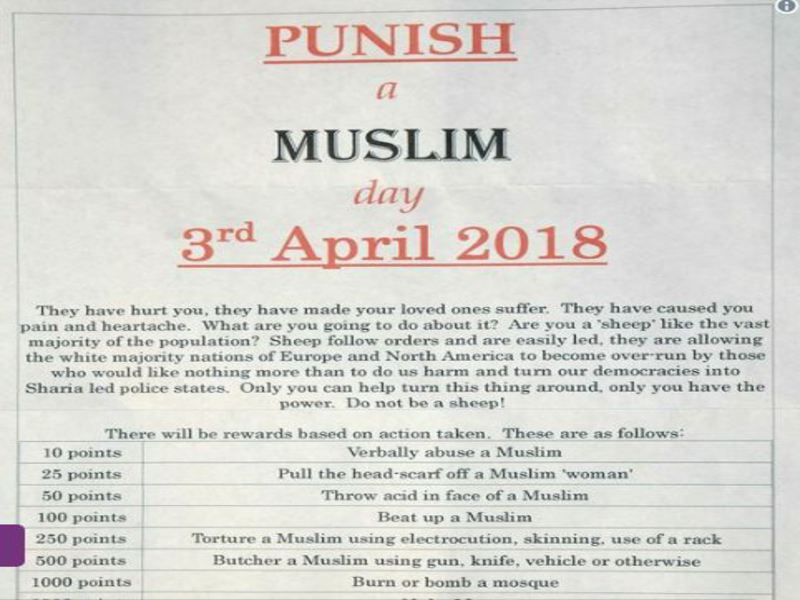 Women in the United Kingdom are being encouraged to hide their hijabs on ‘Punish a Muslim Day’ which encouraged violence against Muslims on April 3.

Earlier this month, at least six communities in England reported receiving anonymous letters enclosed in white envelopes with messages calling for the day of violence.

The North East Counter Terrorism Unit said in a statement that it had received reports of “potentially malicious communications sent to individuals across the UK,” and has asked victims to contact their local police.

The letters call on UK citizens to observe “Punish a Muslim Day” on April 3 and list violent acts that people can perform targeting anybody they think is a follower of Islam; each action comes with a set of points a perpetrator would collect after they commit the said “punishment”.

These hateful actions include, for example, pulling off a woman’s headscarf for 25 points as well as out-rightly calling for a Muslim’s murder for 500 points.

Other violent “punishments” include butchering, electrocuting Muslims and bombing mosques.

The letter added April 3 would be a day to “help turn things around” for Western Europe with these violent attacks.

“Are you a sheep like the vast majority of the population? Sheep follow orders and are easily led,” it says. “They are allowing the white-majority nations of Europe and North America to become overrun by those who would like nothing more than to do us harm and to turn our democracies into sharia-led police states.”

According to London-based newspaper The Metro, messages circulated among the Muslim community have warned women to avoid collecting children from school.

Muslims are also encouraging each other lock their doors properly, walk in open spaces and to move in groups.

One of the WhatsApp messages seen by the Mirror reads: “Sisters please be warned that on 3rd April DO NOT GO OUT they have made a national punish a muslim day!
“This is not a joke its sick plan they have a pointing system where they will b giving points nd reporting ona site with vids etc punishments include taking off hijabs…beating up and even acid throwing.
“May Allah protect us all. (sic).”

The Metro reported: “In another message, women are urged to avoid shaded areas, travel in a car with a neighbour and cover the hijab with hats, hoods or coats. They are also encouraged to avoid wearing the abaya and not stop for anyone asking them a question.”

“Lock your doors well after you return home and don’t answer the door to anyone you don’t know very well,” the message reads.