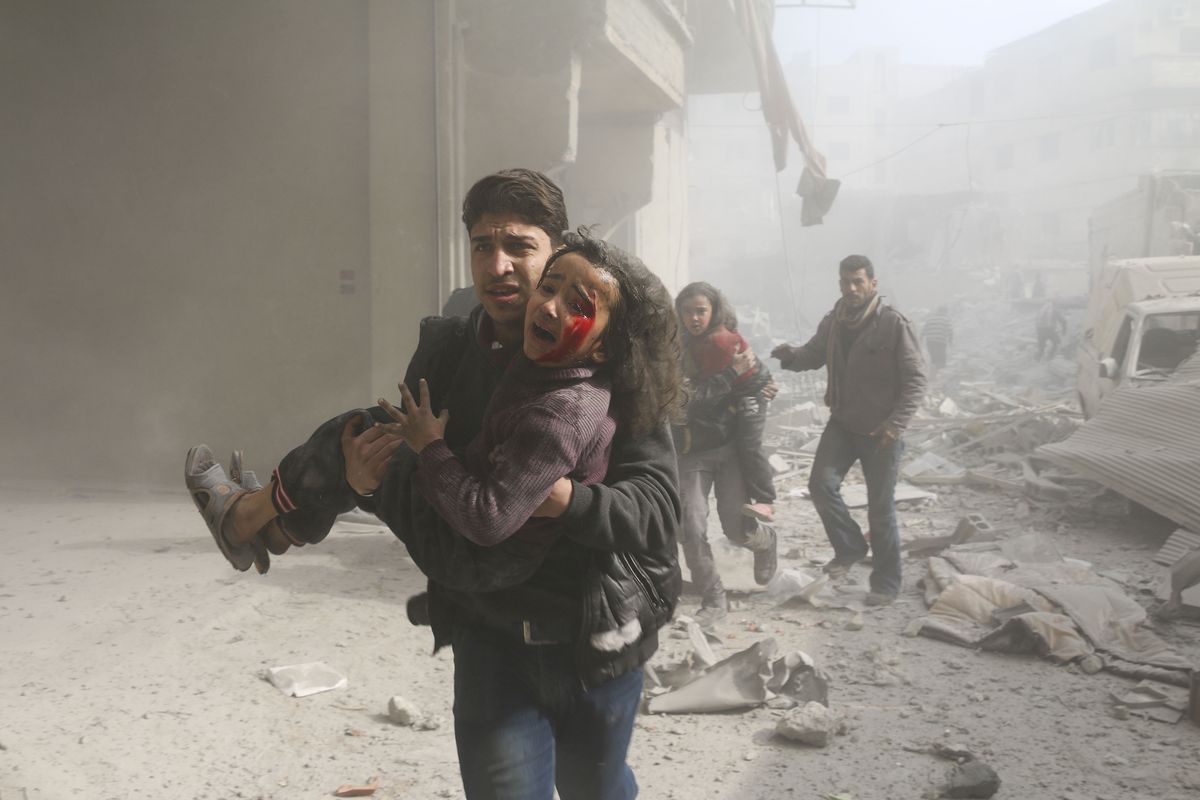 A chlorine attack on the town of Hamouriyah in Eastern Ghouta has injured over 30 people overnight, according to local sources on the ground in the Syria.

“Civil defence rescue teams have managed to evacuate 30 civilians who were suffering from suffocation, mostly women and children following a chlorine gas attack by Syrian regime forces on peaceful neighbourhoods in the city,”

Mahmoud Seraj, a member of the White Helmets, told MEMO. “Two volunteers also suffered from suffocation while performing their humanitarian duty to assist the injured.”

Yesterday was also the bloodiest day in Ghouta since the 30 day ceasefire was unanimously voted in favour of at the UN Security Council, with 80 people dead and more than 300 injured as a result of continuous Syrian airstrikes on the besieged enclave. The civilian death toll stands at 780 as of this morning, since the heightened assault on the district began two weeks ago, according to the Syrian Observatory for Human Rights.

The news of a chemical attack comes amid multiple reports that aid convoys have been unable to reach civilians, despite Russia allegedly allowing aid through as part of the plan for five hour daily ceasefires.

The International Committee of the Red Cross aid convoy confirmed yesterday that its vehicles were forced to retreat from the town of Douma after nine hours due to shelling. Many of the 14 trucks of aid sent by the UN had been stripped of 70 per cent of vital medical supplies by the Syrian regime before being allowed to enter the area.

According to Seraj, some nine trucks sent as part of the interagency convoy were also forced to exit the province before being able to unload any of the supplies.

In a statement earlier today, the UN said that it would attempt to deliver aid again on Thursday. Only one small convoy with supplies for 7,200 people has been allowed to Ghouta so far this year, in mid-February.

On Saturday, Syrian President Bashar al-Assad vowed to continue the offensive on eastern Ghouta, calling the operation “a continuation of fighting terrorism”. Government forces have seized a quarter of the territory held by opposition groups and just need to advance just a few more kilometres further to split the enclave in two, said a commander in the military alliance that backs Assad, prompting accusations that the regime is seeking to partition the province.

“What needs to happen instead is a nationwide ceasefire that was voted upon unanimously at the United Nations last Saturday,” Nauert told reporters at a press briefing. “Fifteen countries supported it, let me remind you. So did Russia.”

The US and UK have previously said that proven continuous use of chemical weapons in Syria would warrant international action. Last week, the US called for the United Nations Security Council to create a new inquiry into who is to blame for chemical weapons attacks in Syria; previous inquiries have shown the Syrian regime to use sarin gas and chlorine on multiple occasions.

Earlier this month the Syrian Network for Human Rights found that the Syrian regime of President Bashar Al-Assad, has used chemical weapons 211 times since the start of the conflict, killing some 1,421 people.