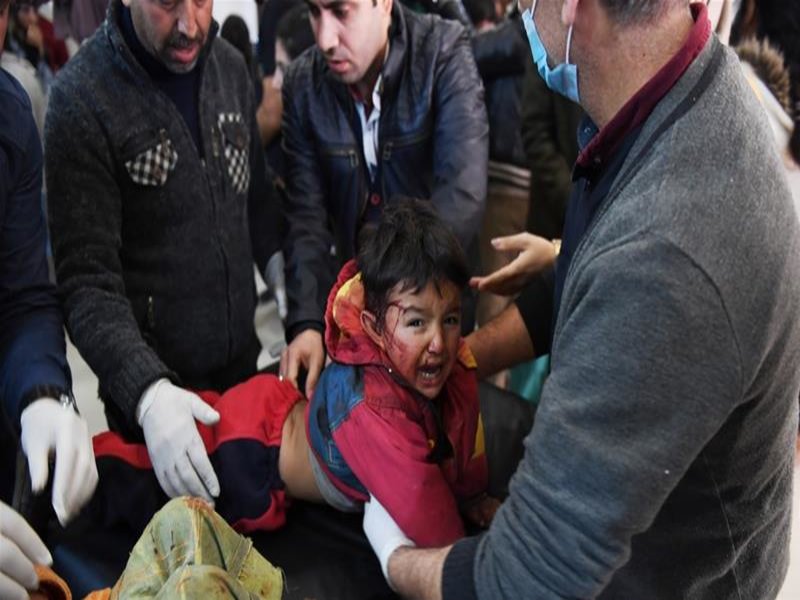 At least eight civilians have been reported killed following Turkish air strikes near the Syrian enclave of Afrin, as Turkish-backed fighters accused the armed Kurdish group YPG of forcibly recruiting minors to fight.

The Syrian Observatory for Human Rights said the fatalities, including five children from one family, were from the village of Kobla just outside of Afrin, which had been previously hit by Turkish bombardments.

The latest civilian casualties bring to 51 the number of people killed in and around Afrin since the operation against the YPG began on January 20, the Syrian Observatory said.

As of Sunday, at least five Turkish soldiers had also been reported killed in the operation, according to the Turkish daily Hurriyet.

Al Jazeera’s Stefanie Dekker, reporting from the Turkey-Syria border on Monday, said her sources confirmed the civilian casualties. But the number remains unclear.

“Turkey has denied targeting Syrian Kurdish civilians,” she said. “But of course we know that when it comes to war, the truth is somewhere in between. There will always be civilian lives ripped apart. So it is very difficult for people there.”
On Monday morning, our correspondent reported shelling at the border, although she described the situation as “relatively calm”.

Meanwhile, the Turkish military said it captured the strategic Mount Bursaya, which is reportedly being used by the YPG to target civilians in Turkey’s province of Kilis.

Turkey said tunnel systems and concrete structures were found at the mountain, which overlooks both Kilis and Syria’s Azaz district, which is controlled by the Turkish-backed Free Syrian Army (FSA).

Turkey also said the structures were being prepared for “long period of defence and sheltering” by Kurdish YPG fighters.

Al Jazeera’s Dekker said “intensive air strikes, artillery and rocket fire” were launched from the Turkish side throughout the day on Sunday.

“What Turkey is focusing on right now is pushing the YPG back from the entire border areas,” she said.

As of Monday, a total of 597 YPG fighters have been killed during the operation, Turkish state news agency Anadolu reported, quoting Turkish military. Al Jazeera was unable to independently verify the numbers.

The YPG also reported multiple air strikes on Sunday targeting a dam in the Shera district of Afrin. The armed group warned the destruction of the Maidankee dam could cause flooding on Afrin residential areas.

The YPG and its political wing the Kurdish Democratic Union Party have come to control large expanses of northern Syria, including Afrin, in the course of the Syrian war.

The Kurdish group was at the forefront in the fight against the Islamic State of Iraq and the Levant (ISIL, also known as ISIS) group, which had captured large parts of Syria and neighbouring Iraq in 2014.

The US sees the YPG as an effective group in the fight against ISIL in the region, and has supported the group with weapons and military advisors.

That puts the US in direct contention with its NATO ally Turkey, which considers the YPG as a “terrorist group” and an extension of the Kurdistan Workers’ Party (PKK), which has waged a bloody three-decade fight against the Turkish state.

Meanwhile, FSA fighters claimed YPG fighters have “forcibly recruited” Kurdish civilians to fight against the Turkish military and the FSA.

Abu Ali Sicco, an FSA commander, told Anadolu news agency that teenagers as young as 16 and 17 were “forced” to join the YPG.