US vice-president says American embassy will move to Jerusalem by end of 2019, draws Palestinian anger 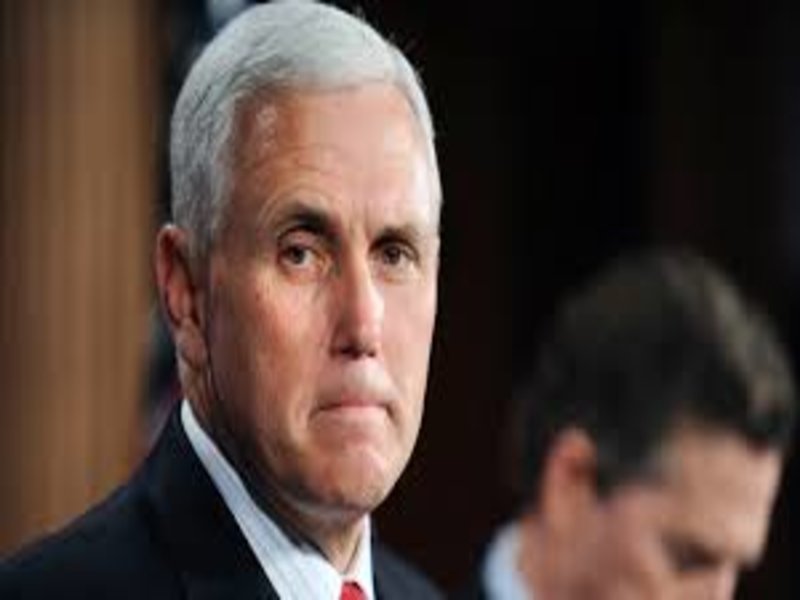 Occupied West Bank – As United States Vice-President Mike Pence reinforced US President Donald Trump’s pro-Israel positions during a visit to Jerusalem on Monday, Palestinians expressed little surprise over what they perceive as further confirmation of American bias in the Israeli-Palestinian conflict.

Trump’s decision in December to recognise Jerusalem as the capital of Israel sparked protests across the occupied Palestinian territory which were violently repressed by Israeli forces at the time.

Palestinian public opinion of the United States has only worsened since, as the country recently severely slashed its contribution to UNRWA, the United Nations agency which has been tasked with providing humanitarian and social services to Palestinian refugees in the occupied territories and neighbouring countries since 1949.

Pence, who arrived in Israel late on Sunday, gave a speech laden with religious references to the Israeli parliament, the Knesset, on Monday afternoon, in which he announced that the United States was officially planning to move its embassy to Israel in Jerusalem by the end of 2019.

“In the story of the Jews, we’ve always seen the story of America,” Pence, a fervent conservative Christian, told Israeli parliamentarians, in a speech which fell firmly in line with the Evangelical Zionist narrative drawing a parallel between the American pilgrims and the Biblical Jewish exodus.

“His message to the rest of the world is clear: Violate international law and resolutions and the US will reward you,” he added.

While Pence highlighted America’s deep ties to Israel, stating that Trump had “righted a 70-year wrong” by recognising Jerusalem, and that the US had “chosen fact over fiction” on the matter, his rhetoric has left Palestinians unfazed.

“We are not disappointed,” Jawad Siyam, the director of the Wadi Hilweh Information Center in Jerusalem told Middle East Eye on Monday. “This is a continuing policy of the United States doing its best to support the occupation of Palestine.”

“Pence speaks in front of the most racist parliament in the world,” Siyam added. “For us, this visit is supporting the criminality of Israeli aggression on the Palestinian people.”

Pence is scheduled to visit the Western Wall in the Old City of annexed East Jerusalem on Tuesday, a visit which Palestinians have seen as yet another gesture of American support of Israel to the detriment of Palestinians – including the Christians Pence said the US would provide greater protection to in the Middle East in Monday’s speech.

“Palestinians aren’t happy with his visit. Jerusalem is a part of us all – Christians and Muslims, we also have rights to Jerusalem,” Maha, a resident of the occupied West Bank city of Bethlehem, told MEE on Monday.

“But the American government is only recognising the Jews’ rights to Jerusalem.”

Pence was initially scheduled to visit Israel, Jerusalem, and Bethlehem in December, shortly after Trump’s announcement regarding Jerusalem.

However, his visit was postponed until January, officially due to a tax reform bill being voted in the US Congress at the time – although many Palestinians perceived the decision as an attempt to save face for the devout Christian vice-president, after the Palestinian Authority (PA) said it would refuse to host Pence in Bethlehem, just ahead of Christmas celebrations.

The PA has maintained its refusal to host Pence during this current trip, while Knesset members from the Joint Arab List – a coalition of parties representing Palestinian citizens of Israel – boycotted Pence’s speech on Monday, and Palestinian Christian leaders have also vowed to snub the American vice-president.

Palestinian Israelis forced out of Knesset
Several Joint List MKs were forcibly ushered out of the Knesset on Monday afternoon as they tried to unfurl signs proclaiming that Jerusalem was the capital of Palestine.

“Our protest today in the plenum is in honour of all who oppose the occupation and dream of peace,” Joint List head Ayman Odeh later wrote in a statement, slamming “the Trump-Netanyahu regime’s exaltation of racism and hatred, who speak of peace solely as lip service.”

Despite the recent American moves, Pence has nonetheless insisted that the US government was committed to its self-appointed role as peace broker between Israelis and Palestinians, as Israeli Prime Minister Benjamin Netanyahu insisted during a cabinet meeting on Sunday that there was “no substitute for US leadership” in any future peace talks.

Naji Owdah, a community organiser in the Dheisheh refugee camp outside of Bethlehem, refuted this assertion.

“The US doesn’t lead anything except war,” he told MEE with a wry laugh. “Anyone who comes from the United States to Israel, whether Trump or Pence, to say that they will move the embassy to Jerusalem, this is not new, but it’s good to be clearer about the US’ positions, that have already been in place since previous administrations.”

Some Palestinians expressed hope that Palestinian leaders would maintain their boycott of American officials.

“Now we see the truth. Now we know that Trump is a liar,” Rakan, a Palestinian resident of the Bethlehem area, told MEE. “I think the PA should be stronger against the US, to show we don’t surrender.”

However, others expressed doubts that the PA would push back as far as they saw necessary.

“The Palestinian government won’t propose something that will cause a big conflict by Israel, or they will be punished for it,” Owdah said, pointing out that while Palestinian leadership had called for a strike on Tuesday in protest, there was no actual programme of action.

“We hope that people will raise their voices, and go to the streets, but we are not expecting anything from any government, including our own.”