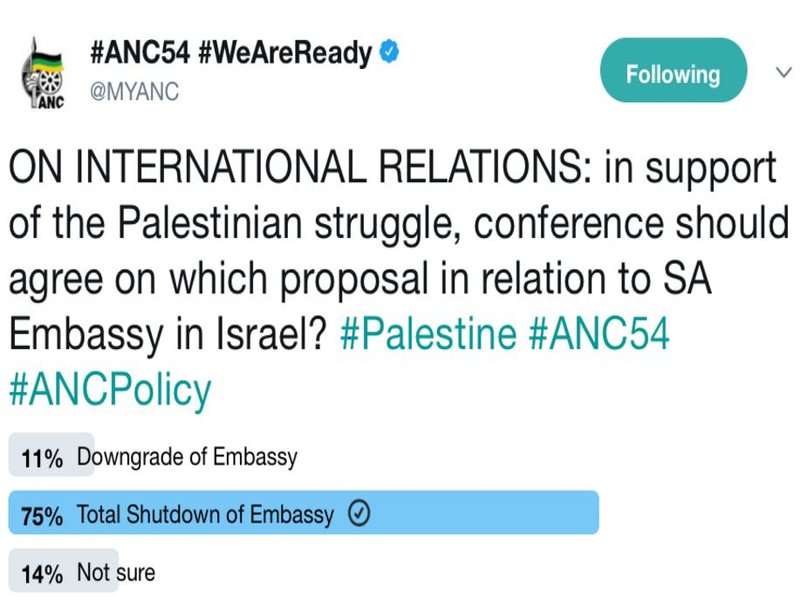 A poll carried out by South Africa’s governing party, the African National Congress (ANC), has found overwhelming (75%) support for the shutdown of the SA Embassy in Israel.

The ANC online poll comes ahead of the ANC’s conference later this week where branches are to ratify a recommendation from the ANC’s national policy conference for the immediate and unconditional downgrade of the SA Embassy in Tel Aviv to a Representative/Liaison Office.

Writing on downgrade, ANC Deputy Secretary-General, Comrade Jessie Duarte, explains that: “As the ANC therefore prepares for its National Conference, South Africa’s future relations with Israel hangs in the balance and rightly so.

For over two decades, South Africa has pleaded with Israelis and worked with them, together with local groups, to ensure that injustices do not continue. Yet these have gone on unabated.

Support from within the ANC, for the downgrade, has come from various branches and regions across the country.

In an article published by the Cape Time, the Western Cape Provincial Secretary explains why his province will be supporting the resolution: “While the ANC has long pledged its solidarity with the liberation struggle of the Palestinian people, it must decide on more clear and actionable resolutions at this conference. The ANC of the Western Cape Province joins the collective of branches within the ANC in supporting the immediate downgrading of diplomatic relations with Israel, as a meaningful step towards holding the occupying state to account…words that are not backed up by action simply indicate to Israel that it may continue with its occupation, colonialism and apartheid.

If we are to have meaningful solidarity with Palestine, then we must move beyond our previous symbolic gestures and turn our words into action.”

South Africans have spoken in support of the ANC branches calling for the downgrade of the SA Embassy in Israel.

We are confident that the ANC conference will implement the downgrade which has been backed by virtually all Palestinian political parties including Hamas, Fateh, PFLP as well as the Palestinian Authority and Palestinian Churches. Progressive South African Jews and their Israeli counterparts have also urged for the downgrade.

ISSUED BY KWARA KEKANA ON BEHALF OF BDS SOUTH AFRICA