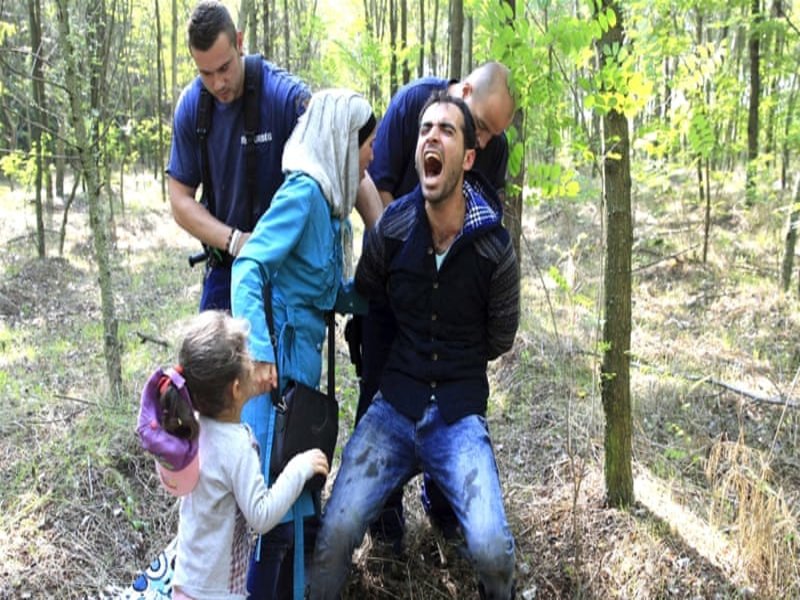 Refugees and migrants attempting to cross from Serbia into neighbouring European Union countries have endured illegal deportations and widespread police violence, including beatings and electric shocks, according to a report by a watchdog group.

The findings by German monitor, Rigardu, paint a grim picture of systematic abuse on the borders of Serbia – which is not an EU country – and Hungary and Croatia, which are both members of the bloc.

The group said on Sunday it had documented at least 857 instances of people being subjected to violence, including kicking and dog bites, so far this year.

Of that total, 52 incidents involved minors.

Rigardu also recorded at least 110 cases of Hungarian and Croatian authorities carrying out illegal deportations to Serbia. There were also allegations of push-backs by Slovenian officers on the country’s border with Croatia.

Using photographic evidence and first-person testimonies, Rigardu has now launched an online database to document individual cases of violence and push-backs by EU countries’ forces along the so-called Balkan route.

The group said the actual number of such incidents is likely to be far higher since many cases of push-backs and police violence often go unreported.

Lazara Marinkovic, a Serbian journalist who has covered the refugee crisis for several years, said reports such as the one published by Rigardu “are very common and the testimonies are consistent with the injuries” she had observed on several occasions.

“Most of the violent push-backs come from Croatian and Hungarian border police,” she told Al Jazeera from Serbia’s capital, Belgrade.

“I’ve met a lot of people who showed me their phones had been broken and their injuries.”

‘Next time, we will kill you’
In one incident recorded by Rigardu, on November 4, six Afghan men were allegedly attacked and beaten by Croatian border guards.

When one of the men, whose name has been withheld, requested to apply for asylum, he was told by an officer, “We don’t need you people to come here”, according to the testimony provided to the group.

On October 19, Croatian police officers apprehended four Afghan men crossing from Serbia’s Sid. After beating them and stealing their money, according to the account given to Rigardu, one of the officers allegedly shoved a tree branch into one of the men’s mouth.

“They shouted, ‘Don’t speak, go back to Serbia’,” the group’s report said.

In another incident, on October 7, four Tunisians and a Moroccan were allegedly beaten and subjected to death threats by Croatian border police, said Rigardu.

The officers hit them with the handle of a baton and then beat them again after they had already crossed the border back into Serbia, the men said in their testimony.

“F*ck you, go to Serbia, next time we [will] kill you,” they claimed the officers told them while beating them.

Contacted by Al Jazeera, a Croatian police spokesperson said in an email that in the cases they have investigated, authorities have “not found unprofessional or unlawful conduct of police officers toward migrants”.

The police spokesperson added: “The use of … force or bodily force is being analysed for each particular case, and the ministry [of interior] takes care that the police officers act in compliance with the legal use of police powers.”

Speaking to Al Jazeera by email, the Hungarian government’s international communications office said it “utterly rejects” the allegations, claiming they are “once more seeking to discredit personnel on duty at the border”.

“The police are performing their duties lawfully, professionally and proportionately, and they place special emphasis on treating migrants humanely and with respect for their human dignity,” the office said.

“Migrants on Hungary’s borders are not being harassed, and the significant numbers of unaccompanied minors who have been arriving are being provided with protection, health care and education,” it added.

“Hungary treats those in genuine need humanely, and those waiting on its borders or on its territory receive fair treatment. Migrants are also expected to abide by EU and Hungarian laws, however.”

Speaking to Al Jazeera by email, a Slovenian police spokesperson said the claims come “as a major surprise”, adding that they “are committed to maintaining high standards of professionalism” and upholding human rights.

“We are not aware of any such cases of push-backs and violence [by] the Slovenian police.”

‘Horrifying practices’
Lydia Gall, a Balkan region researcher for Human Rights Watch (HRW), explained that push-backs across the borders into Serbia are “unlawful” and are often “accompanied by various levels of abuse and violence”.

The practices have been going on for years, she told Al Jazeera. “This has been flagged time and again to the European Union for several years now … and yet the European Commission has chosen not to act on this issue specifically,” said Gall.

Last month, a six-year-old Afghan girl was fatally struck by a train after Croatian police officers allegedly forced her family to walk down the train tracks in the direction of Serbia.

In a statement later published online, the Croatian Ministry of Interior dismissed claims of responsibility. “We emphasise that the conduct of the Croatian border police did not in any way cause the accident and death of the girl,” it said.

HRW’s Gall described the incident as a “sad consequence of the unlawful and often inhumane practices” carried out on EU borders with Serbia.

“This poor girl and her poor family were victims of these horrifying practices as they pan out,” she said.

Disclaimer: Please note the vulgar words used in this article are those of the original accounts/write up.