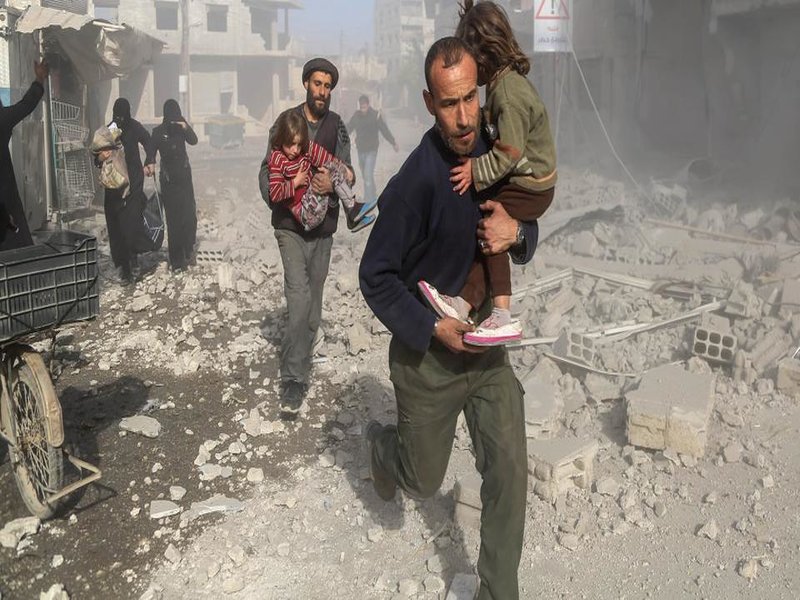 The United Nations children’s agency said on Sunday 137 children stranded in an opposition-held suburb near the Syrian capital require immediate evacuation amid a crippling siege in which five have reportedly died from a lack of medical care.

The Eastern Ghouta suburb, home to 400,000 residents, has been besieged since 2013 and humanitarian conditions there have deteriorated sharply amid violence that intensified since November 14. The Syrian Observatory for Human Rights says at least 202 people, including 47 children, have been killed since.

The area, the last remaining opposition-held pocket near the capital Damascus is technically part of a “de-escalation zone” brokered by Russia earlier this year. Cease-fires brokered by Russia have largely held elsewhere in Syria but there has been little progress toward a political solution to the conflict that has claimed nearly 400,000 lives since it began in 2011.

Geneva peace talks
Syrian opposition and regime delegates are currently in Geneva for a new round of talks with United Nations mediator Staffan de Mistura after a short break.

Bashar al Jaafari, Syria’s ambassador to the UN and chief negotiator in talks aimed at finding a political solution to end the nearly seven-year-old war, landed in a snowstorm on a flight from Beirut.

De Mistura convened the eighth round of separate talks with the government and unified opposition delegations on November 28, focusing on constitutional reform as well as elections. But Jaafari arrived a day late and left after two days, saying the opposition had “mined the road” to the talks by insisting that regime leader Bashar al Assad could not play any interim role in Syria’s political transition.

De Mistura told reporters last Thursday that he would assess this week whether either side is trying to “sabotage” the process.

“The opposition has been extremely constructive and willing to get down to it,” a senior Western diplomat said.

“They are in a difficult place while being criticised internally and pressured by the fact that the regime is bombing away in eastern Ghouta and other places.”

The diplomat said that the regime’s failure to return as scheduled on December 5 had been “a clear sign of not being interested in engaging in the political process”.

Russian President Vladimir Putin has suggested holding a Syrian congress in the Russian city of Sochi early in 2018.
Diplomats see his plan as a bid to draw a line under the war and celebrate Moscow’s role as the power that tipped the balance of the war and became the key player in the peace process.