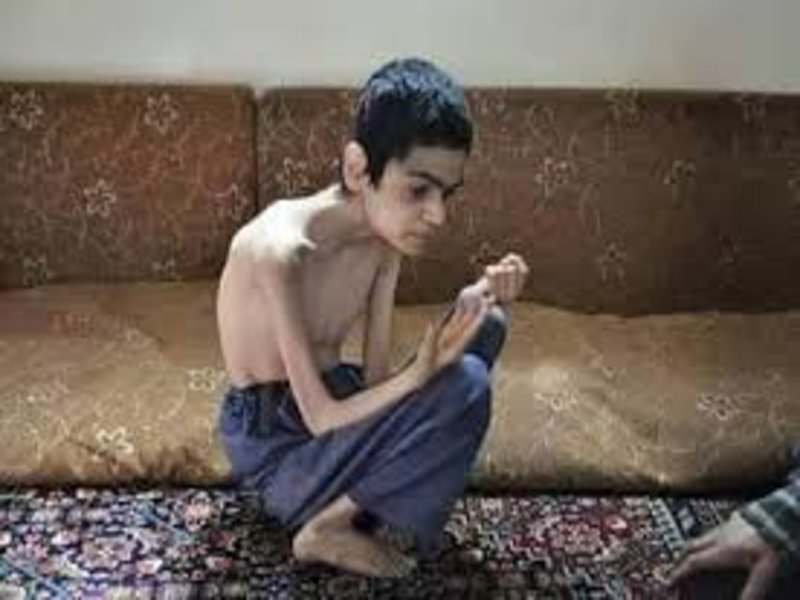 Hamouria – Manal boils water on the stove in the besieged Syrian town of Hamouria, hoping to convince her four children that she is cooking, but she has no food.

She puts the pot on the flame as a ruse, waiting for the children to fall asleep in the dilapidated house before they realise there is nothing for dinner.

In the rebel-held Eastern Ghouta region where she lives, over 1 100 children are suffering acute malnutrition, and hundreds more are at risk because of food shortages caused by a government siege.

Aid agencies warn the situation is worsening, despite an international agreement to implement a “de-escalation zone” in the area, which has decreased violence but led to no new access for food, medicine and humanitarian aid.

“They haven’t eaten anything but bread for the last three days,” Manal said in tears.

“A neighbour gave us the flour.”

Eastern Ghouta, which lies outside the capital Damascus, was once a prime agricultural region.

But the rebel stronghold has been under a tight government siege since 2013, causing shortages of food and medicine, and pushing up prices for what remains on the market, produced locally or smuggled in.

The region has been devastated by years of fighting, with government air strikes and shelling bringing down multi-storey buildings and rendering whole streets uninhabitable.

Basic services for the region’s estimated 400 000 residents are virtually non-existent, with electricity produced only by generators and the water available often dirty and a vector for illness.

Situation ‘getting worse’
Manal’s husband Abu Azzam is unable to work because of a serious injury he sustained in a shelling attack in their old home elsewhere in Eastern Ghouta several years ago.

The attack killed one of their children, and left another, Azzam, missing a foot and dependent on crutches to get around.

The family are desperately poor and have sold most of their furniture to afford food.

“In 24 hours, we have a single meal, which is not enough for the children,” said Abu Azzam in despair.

Ordinarily, the family might hope for assistance from aid groups, but humanitarian access to Eastern Ghouta has been vanishingly rare throughout the conflict that began with anti-government protests in March 2011.

Aid convoys can only enter with government permission, with just two accessing the region since August, carrying assistance for fewer than 100 000 people.

In July, a “de-escalation zone” was implemented in Eastern Ghouta under a deal agreed by government allies Russian and Iran and rebel backer Turkey.

The agreement was meant to improve humanitarian access, but Russian forces “did two distributions at a checkpoint and since then stopped,” said Rami Abdel Rahman, director of the Britain-based Syrian Observatory for Human Rights monitor.

“Humanitarian needs in Eastern Ghouta are huge, and more needs to be done,” said Ingy Sedky, spokesperson for the International Committee of the Red Cross.

“The situation is getting worse,” she added.

“We know from past experience that such situations, where the population depends on the provision of humanitarian aid for its very basic needs, can deteriorate very quickly, and reach tragic proportions.”

Dreaming of three meals a day
For some families, tragedy has already arrived.

At least two children are reported to have died from malnutrition or its complications this month, among them 34-day-old Sahar Dofdaa, whose emaciated form, swamped by her diaper, appeared in shocking images beamed around the world over the weekend.

She weighed less than two kilograms before she died on Sunday at a hospital in Hamouria.
Doctor Yayha Abu Yayha, who works at the hospital where Sahar died, said a key cause of infant malnutrition was that undernourished mothers were unable to feed their babies.

“The basic nutrients that breastfeeding mothers need are not available,” he told said.

“Most of them have anaemia and deficiences of vitamins A and D, as well as zinc and iron.”

Another factor is poor hygiene caused by dire living conditions, lack of running water, and lack of clean water, he said.

Illnesses like diarrhoea can quickly leave even well-fed children underweight.

The UN’s children’s fund Unicef said that 232 children in Eastern Ghouta were suffering from severe acute malnutrition, which requires urgent treatment if the child is to survive.

Another 882 were suffering moderate acute malnutrition, with more than 1 500 other children are at risk, a spokesperson said.

“All I want is to see my children with full bellies,” said Abu Azzam.

“I hope the day will come when we’ll be able to eat three meals a day.”