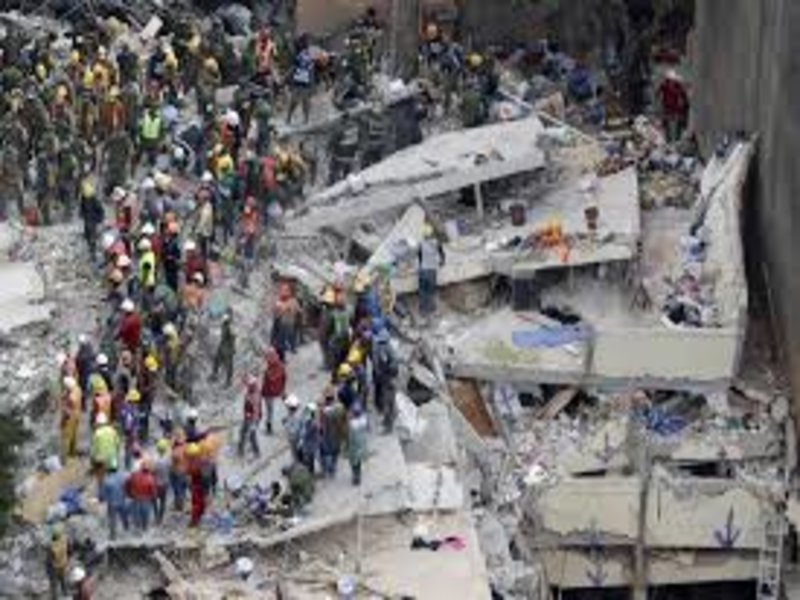 The wiggling fingers of a young girl trapped in the rubble of her collapsed school in Mexico City raised hopes among hundreds of rescuers working furiously to try to free her – a drama that played out at dozens of buildings toppled by the powerful earthquake that killed at least 230 people.

But it was the ongoing rescue on Wednesday at the Enrique Rebsamen school, where 25 people including 21 children perished, that was seen as emblematic of Mexicans’ rush to save survivors before time runs out.

Helmeted workers spotted the girl buried in the debris early Wednesday and shouted to her to move her hand if she could hear. She did, and a rescue dog was sent inside to confirm she was alive.

Hours later the crews were still labouring to free her, as images of the rescue effort were broadcast on TV screens nationwide. Workers in neon vests and helmets used ropes, pry-bars and other tools, frequently calling on the anxious parents and others gathered around to be silent while they listened for any other voices from beneath the school.

At one point, the workers lowered a sensitive microphone inside the rubble to scan for any noise or movement. A rescuer said they thought they had located someone, but it wasn’t clear who.

“It would appear they are continuing to find children,” said Carlos Licona, a burly sledge-hammer wielding volunteer who came to help in any way he could.

Al Jazeera’s Alan Fisher, reporting from Mexico City near the school, said rescuers believe there may be three more children near the buried girl. “This must be a real heartache for these parents because at this stage we still don’t know if the three other children are alive or dead,” he said.

Similar efforts were under way at dozens of collapsed buildings, where firefighters, police, soldiers and civilians wore themselves out hammering, shoveling, pushing and pulling debris aside to try to reach the living and the dead.

By mid-afternoon, 52 people had been pulled out alive since Tuesday’s magnitude 7.1 quake, Mexico City’s Social Development Department said, adding in a tweet: “We won’t stop.”

Among them were 11 people rescued at the Enrique Rebsamen school, where three people remained missing, two children and an adult. Earlier, journalists saw rescuers pull two small bodies from the rubble, covered in sheets.

Volunteer rescue worker Dr Pedro Serrano managed to crawl into the crevices of the tottering pile of rubble and make it to a classroom, where he found no survivors.

“We saw some chairs and wooden tables. The next thing we saw was a leg, and then we started to move rubble and we found a girl and two adults – a woman and a man,” he said. All were dead.

“We can hear small noises, but we don’t know if they’re coming from … the walls above, or someone below calling for help,” Serrano said.

President Enrique Pena Nieto declared three days of national mourning even as authorities made rescuing the trapped and treating the wounded their priority. “Every minute counts to save lives,” Pena Nieto tweeted.